Rainbow Riches Pick’n’Mix is an SG Interactive powered slot game from the Barcrest Studio of fine games. This game is in the genre of the popular Rainbow Riches iPad slot games.

As a sequel, players looking to play Rainbow Riches Pick’n’Mix can expect to find a larger collection of bonus rounds as well as advanced graphics in comparison to the original game. This game comes with 5 reels and 20 paylines. This game is mobile compatible hence players can access it on their mobile devices or PC.

** The Barcrest Rainbow Riches Barcrest Pick’n’Mix and / or similar slot games may be available to play on your iPad, iPhone, Android, Windows device, PC or Mac. Just take a peek at our FREE GAMES PAGE HERE. ** 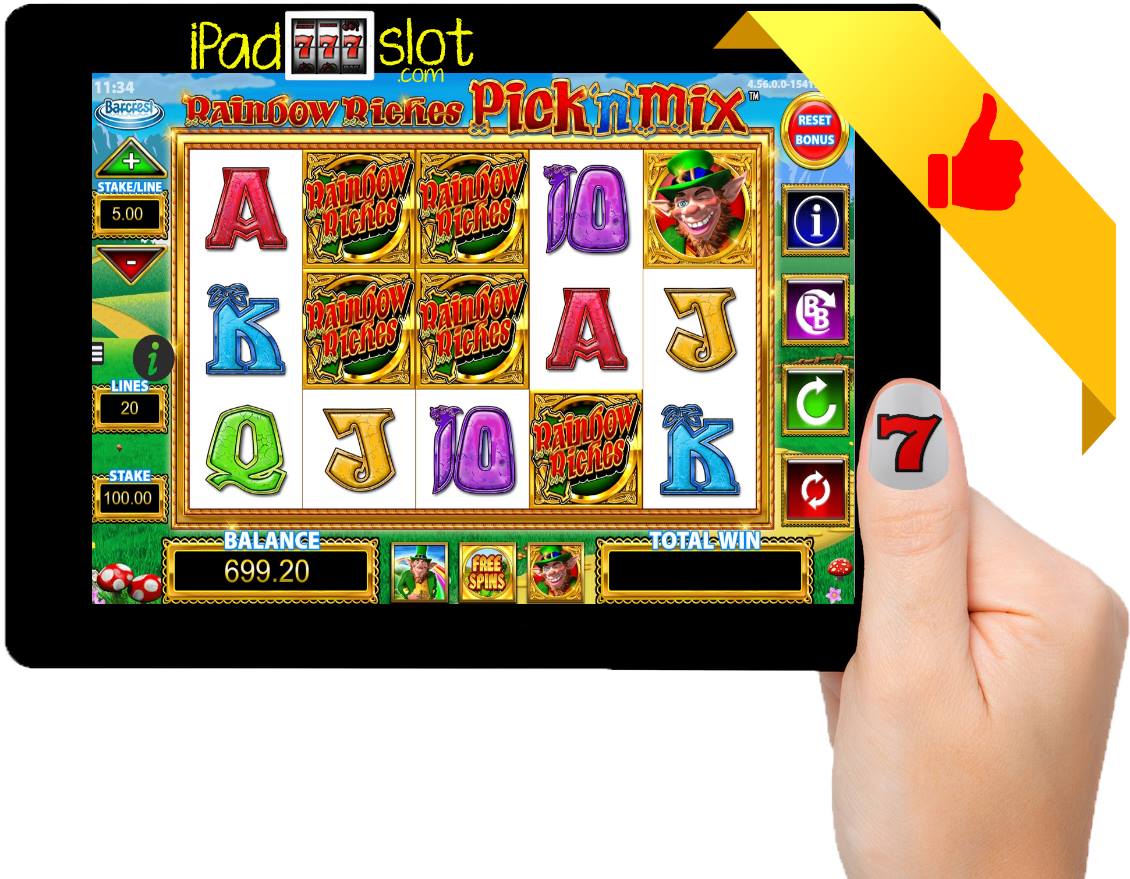 A beautiful green mountain landscape of Ireland provides the background to this slot game and some Irish tunes play in the audio background.

The symbols that players will encounter on the reels in the Rainbow Riches Pick’n’Mix slot include the pot of gold, Mr Monkey, a mushroom, the game logo icon, a golden coin and traditional card symbols. 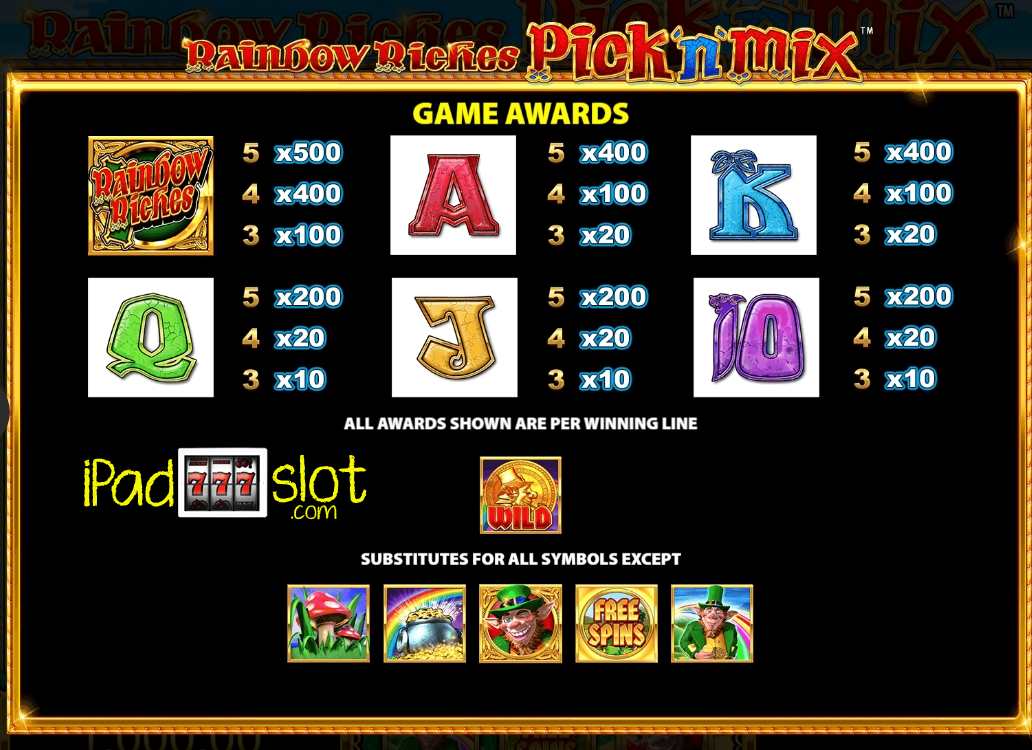 Base game symbols and pay-tables 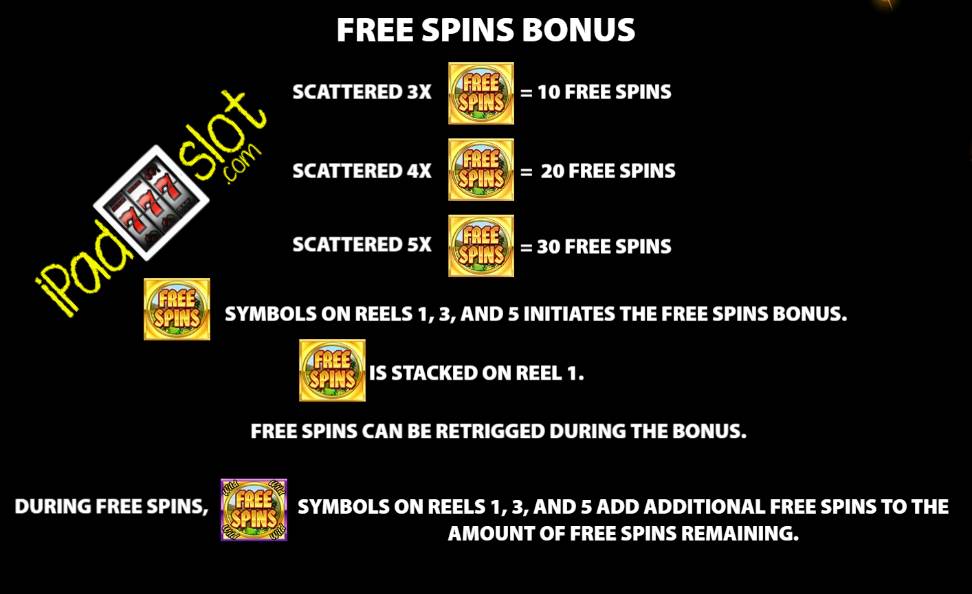 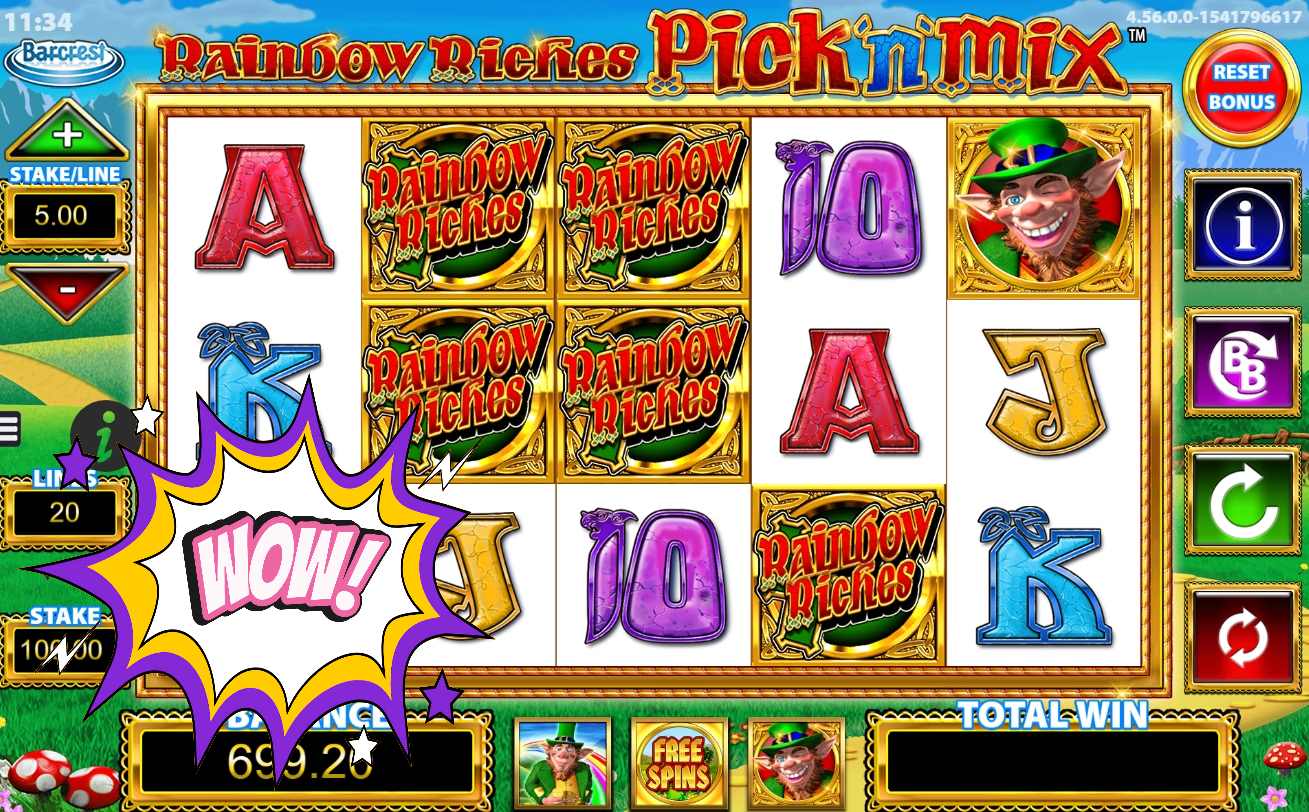 Rainbow Riches Pick’n’Mix slot is a medium volatility game which offers players some excellent rewards from the cracker bonus features. Out of a 10 point rating, this slot game gets a 7.5 point rating in our Barcrest slot game guides.

Black Knight Barcrest Free Slots App SG Interactive powered Black Knight comes with a medieval theme right from the Barcrest Studio. In this online slot, the player meets the black knight, a warrio...
Leapin’ Leprechauns Barcrest Game App Leapin' Leprechauns is part and parcel of the Rainbow Riches genre of iPad games, a game series developed by SG Interactive in the Barcrest Studio. This online ...
Mighty Black Knight Free SG Slots Review Mighty Black Knight is an innovative slot game from SG Interactive in the Barcrest studio and it comes with a medieval theme similar to other games in this genr...
Barkin’ Mad Free Barcrest Slot Game Guide Barkin’ Mad is an animal themed slot game from Barcrest / SG Interactive with a special focus on mans best friend. In this game, the player will find himself in...
The Legend of Big Foot Free Barcrest Slots Guide Legend has it that in years gone by (and still to this day), there is a huge creature named Big Foot or Sasquatch who roams around North American forests. In a ...
Rainbow Riches Fortune Favours Free App Bravery is the sole virtue that you need to start your adventure in Rainbow Riches Fortune Favours. Just as the saying goes, fortune favours the brave, to enric...
Sheik Yer Money Free Slot Game & Guide Sheik Yer Money is a Middle East-themed slot game developed by Barcrest - SG Interactive. In this game, players are virtually transported to the Middle East. In...
Rainbow Riches Reels of Gold Free Slot Guide The title of this slot game is enough on its own to lure players. Odds are, no one would want to miss a chance of spinning reels crafted out of gold! The beauty...
Soldier of Rome Barcrest Free Slots App Soldier of Rome is an innovative action themed iPad and iPhone compatible slot game which comes from the SG Interactive stable of fine Barcrest games. As you wo...
Action Bank Barcrest Free Slot Game Guide Before developing a slot game, game developers have to consider a number of things. Some of these include deciding on whether to create a game that is stylish, ...
Monopoly Roulette Hot Properties Barcrest Free A... Monopoly is one of the very few board games which has managed to stay relevant for decades to pretty much all generations from Granny to the young ones it just ...
Reel ’em In Lobster Potty Free Barcrest Ap... Reel 'em In Lobster Potty is an aquatic-themed slot game whose action all takes place on the high seas. This SG Interactive powered slot game from the Barcrest ...
Hercules High and Mighty Barcrest Free Slots App The SG Interactive Barcrest powered Hercules High and Mighty is a iPad and iPhone compatible slot game which pays tribute to the Greek mighty warrior aka Hercul...
Barcrest Crown Gems Hi Roller Free Slot Guide The title of this online slot machine does reveal to the player what to expect when spinning the five reels of this slot. In essence, what’s revealed is the fac...
Rainbow Riches Free Spins Barcrest App The ‘Rainbow Riches’ series is one of the most popular slot series to come from the SG Interactive stable of Barcrest games. Adding on to the vast number of tit...
Golden Chief Barcrest Free Slots Guide There was a time when the title ‘chief’ was enough to create fear in anyone of lower ranks in the pecking order of the tribe or community. This is not to say th...
Himalayas Roof of the World Free Slot Game Himalayas Roof of the World is a graphically stunning Barcrest game from SG Interactive based on the world’s biggest mountain ranges i.e. the Himalayas, which i...
MONOPOLY Money in Hand Free Slot Guide SG Interactive has developed an affinity for releasing Monopoly themed games having realized how popular previous slots of the same nature are with casino playe...
Valkyrie Fire Barcrest Free App Review Valkyrie is a Norse mythology themed iPad and iPhone compatible slot which comes from the SG Interactive stable of Barcrest games. This slot has a special focus...
Hula Nights Free Barcrest Slots App Hula Nights is a Hawaiian themed slot game which comes from the SG Interactive Barcrest stable of must play games. In this iPad slot game, players get to take a...