In recent times, 3 reel slots have lost their popularity a bit thanks to all the fancy games in the market with all the wiz bang graphics. However, SG Interactive sought to change that when it developed this highly impressive game (graphics wise). Red Hot Wild is a fruit themed online slot machine which brings back to style the traditional 3 reels and 5 payline slot design in this Barcrest game.

Coming with 3 reels and 5 paylines, players playing this game can expect to encounter all sorts of fruit symbols that are associated with retro slot machines such as watermelons, apples, oranges and pears. The beauty of this classic game is that it is not only available on the desktop but can also be accessed and played on mobile devices as long as they run on either Android, Windows or iOS operating systems you are good to go.

** The Barcrest Red Hot Wild slot game might be available to play for free on your iPad, iPhone, Android, Windows device, PC or Mac. Just take a look at our FREE games page here. ** 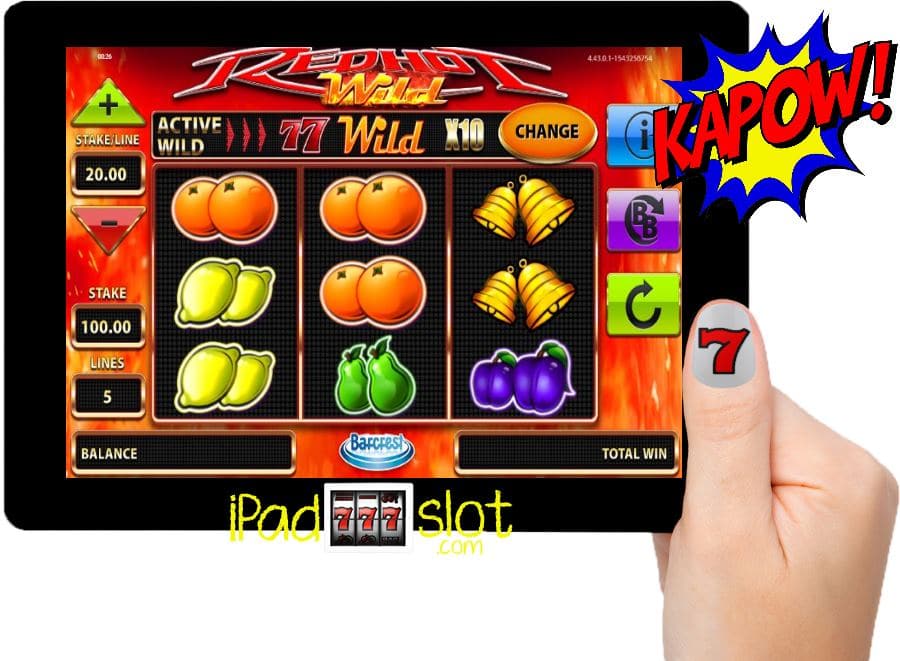 The backdrop of this slot game depicts blazing fire flames acting as the background. The reel section is covered by a patterned black and beige wall. 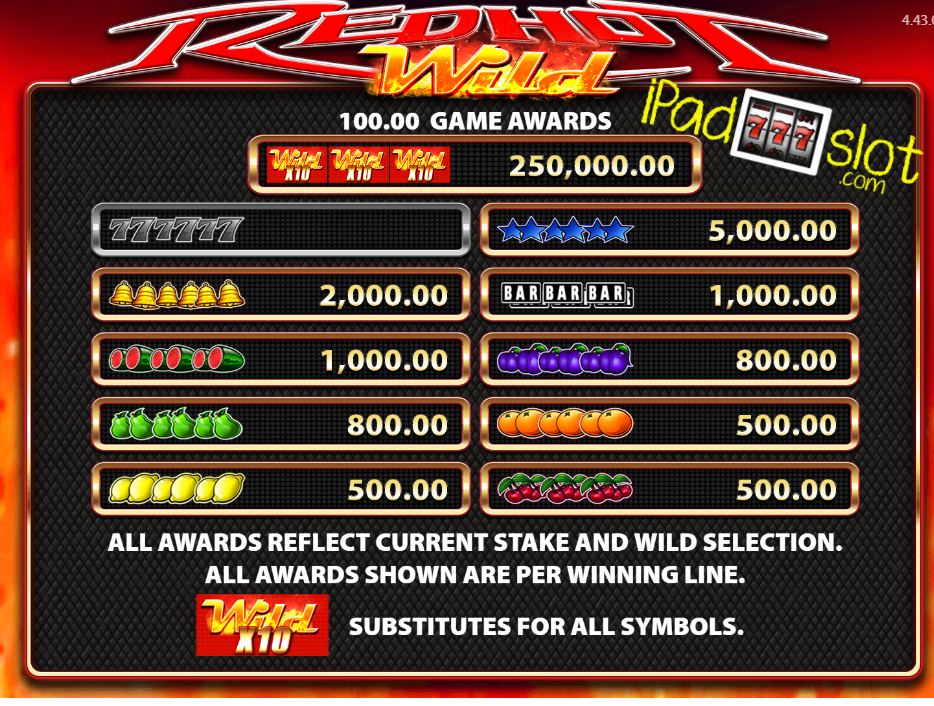 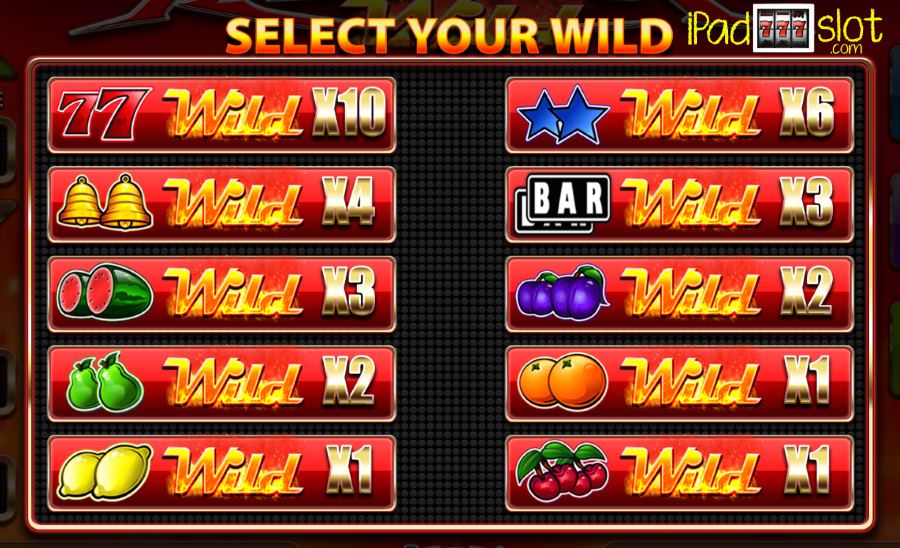 Red Hot Wild comes with a fixed jackpot of 1,500.00 coins. The player will hit the jackpot when he lands three wild symbols in a row.

At the start of the game, the player may decide to pick any symbol that he wants as a wild (replacing the default wild). The wild symbol selected may come with a multiplier value just like the default wild. 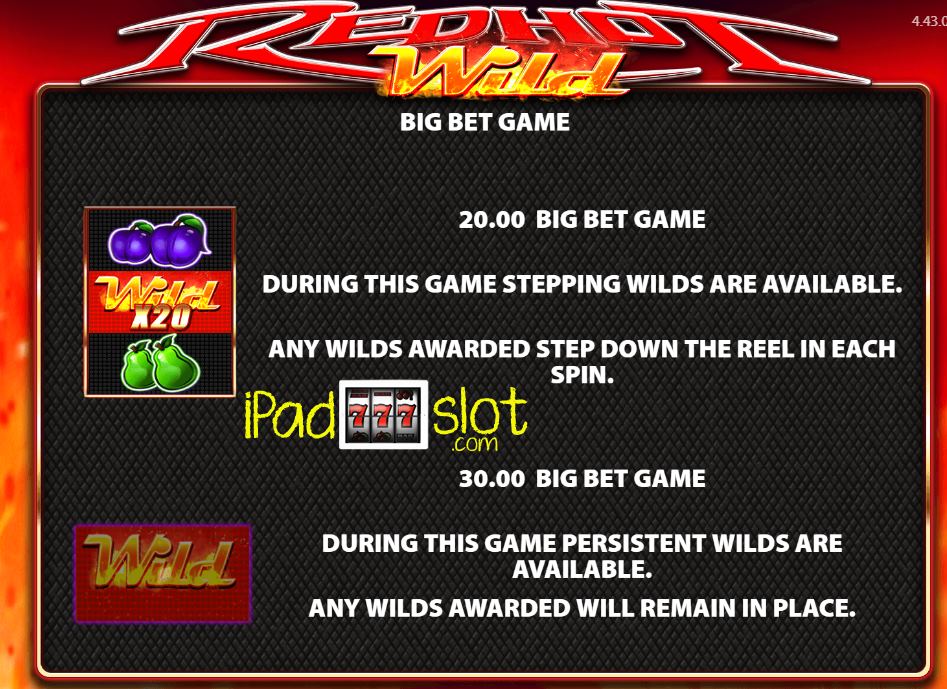 You can pick which symbol from the paytable to turn wild, how cool is that! The symbol you pick decides how much it multiplies your pay-outs by when it’s wild. You can also have a Big Bet wager to either hold the wilds or nudge the wilds over five game spins.

Red Hot Wild is a medium volatility slot game which offers some excellent rewards for players. The RTP of this game range from 94.00 percent to 98.00 percent. This slot game gets an 8 point rating out of 10 points in our Barcrest iPad slot game app guides.

Buffalo Spirit by WMS Free Slots Guide Buffalo Spirit iPad slot from WMS is features a colorful western nature theme and interesting game play that you are definitely going to enjoy. The reels are fu...
Frankenslot’s Monster Preview A time comes when a developer releases a high quality slot machine to compete with other new slots. Frankenslot’s Monster evidences that this time came for Bets...
Review of Betty White’s Twisted Tales Free Slots... This is another of IGT’s movie branded slots that seems to make the grade in this genre very well. This game is inspired by the famous American comic and actres...
So Much Sushi Slots by Microgaming Guide With reels of 5, rows of 3 and paylines of 25, So Much Sushi is a Japanese game that depicts food habits and culture of the people of Japan. It is developed by ...
Dragon’s Temple Free Slots by IGT The culture of the Orient is full of dragons and so is the casino floor chocked with dragon genre games. This game is based on dragons in a big and exciting way...
Thundering Buffalo Free Play Guide This Thundering Buffalo iPad slot is created by High 5 Games in partnership with IGT and it features MultiWays wins and the fabled American bison as the main ch...
Bally Quick Hit Super Wheel Wild Red Free Play G... Quick Hit Super Wheel Wild Red comes from the Bally / SG Interactive company. The game comes with a retro theme and as such, gamers looking to play this online ...
The $100,000 Pyramid Free IGT Slot Game Guide The $100,000 Pyramid online slot machine is a game from the IGT company and was first released for land casino players in 2001. This online slot machine is a ga...
MONOPOLY Money in Hand Free Slot Guide SG Interactive has developed an affinity for releasing Monopoly themed games having realized how popular previous slots of the same nature are with casino playe...
Lightning Link Happy Lantern Pokies (Slot) Free ... Lightning Link Happy Lantern is an oriental themed iPad compatible slot game from the Aristocrat company. This game comes with four progressive jackpots i.e. th...
Bushido Code GameArt Slots App Bushido Code is a nice looking slot machine game by GameArt, and it is based on Samurai and Japanese philosophy of war and culture. Let's Play Bushido Code iPa...
Diamond Tower Lightning Box Free Slot Guide Diamond Tower is an online slot machine produced by Lightning Box which comes with a wealth and fancy pants theme. This game will introduce players to the glitz...
Pompeii Slots app for iPad Casino Players The best way to play and win on Pompeii iPad slot game has been asked many times before, their is no sure way but our guide may help you in the quest to win big...
Lucky Lady’s Charm Deluxe Free Slot Guide Lucky Lady’s Charm is a Novomatic powered iPad slot game that has a special focus on magic and sorcery. When spinning the five reels that come with 10 paylines ...
Monopoly Millionaire Bally Free Slot Game App Gu... Monopoly Millionaire is one of the many slots from SG Interactive which fuses elements of slots and elements of the popular game of Monopoly into one exciting s...
Miss White Free Slots Game Review IGT in this game rekindles the tale of Snow White, one of the most popular legends to have ever been told. Miss White slot game emulates the earliest Snow White...
African Dusk Mr. Cashman Free Slots Guide African Dusk Mr Cashman is an African themed game focusing primarily on African wildlife. This is an Aristocrat powered video slot game which comes with five re...
The Monkey Prince Free IGT Slot Game Guide The Monkey Prince is an Orient themed slot game which comes from the IGT company. While the oriental theme ranks as one of the most popular in the casino gaming...
Fire Opals IGT Free Slots Guide This is a Hawaiian themed video slot from IGT. This slot combines precious gemstones and volcanoes in a stunning display of graphical brilliance. Quick Start G...
Aristocrat Wicked Winnings II Free Slots Game Gu... Wicked Winnings II is an intriguing free pokies game from Australia’s most popular software provider Aristocrat. This slot is loved because of the great bonus f...
Tags: Barcrest free app, Barcrest free iPad pokies, Barcrest free iPad slots, Red Hot Wild slots,