Red Tiger Gaming has come up with the ancient Chinese kingdom themed Imperial Palace pokies game. The game gets 5 reels and 20 pay lines. Players can bet between 0.20 and £500.00 per spin on this game. The game goes high on offering stacked wilds, 1000X Multipliers, and free spins just so that everyone has a cracker Asian flavoured iPad pokies gaming experience.

Imperial Palace slot game opens to a beautiful layout where there is a Chinese woman and in her background, we get to see cherry blossoms and more to stay true to the theme. The light toned background color stands as a stark contrast to the stylish symbols that feature. 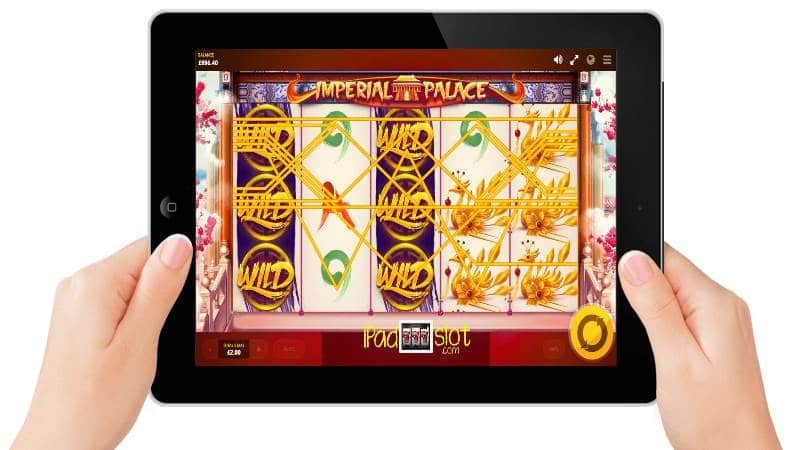 The reel gets symbols that look like they have been painted similar to the delicate Chinese script themselves. The Chinese temple, harp, golden peacock, a blue vase, and a red flower are all the symbols besides the usual poker symbols that feature on the reels. 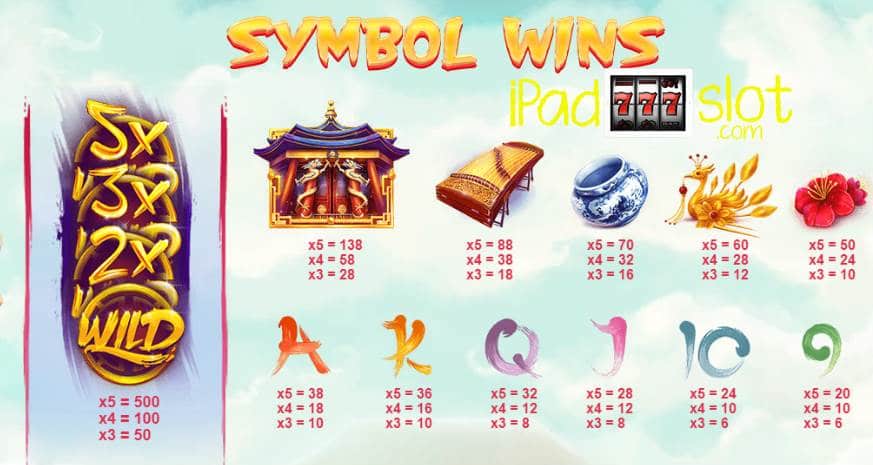 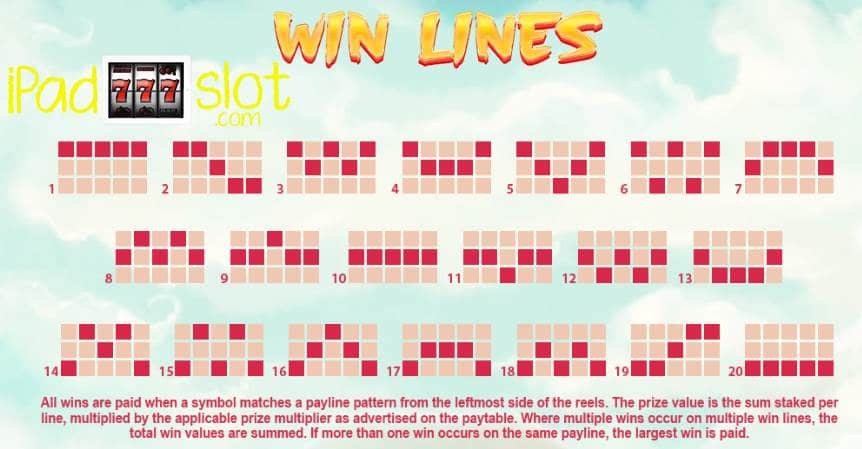 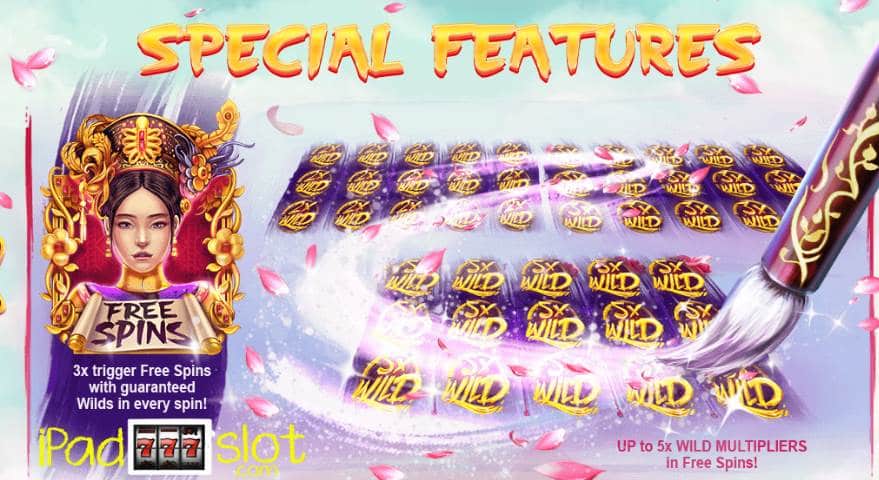 The game is high on thrill for those who love to indulge in Multipliers. These make this iPad pokies game highly lucrative and fun at the same time. We rate Imperial Palace 7 from 10 points in our game review. You can play this game for real money from our iPad casino guides.

Scarab IGT Slot Game Free Play Guide Scarab is an online slot machine which comes from the IGT company. If like games like the Cleopatra from IGT or Aristocrats King of the Nile and Queen of the Ni...
Aristocrat Buffalo Free Play Pokies Guide Buffalo is one of the most popular free iPad slots that Aristocrat Gaming has ever developed. Even though it has been around for quite some time in land casinos...
Whales of Cash Deluxe Free Slots This is an ocean-themed slot game powered by Aristocrat which stays true to its title in a big way. All the action in this slot game is primarily focused on the...
Crown Of Egypt Free IGT Slots Guide Crown of Egypt from IGT is an Egypt-themed game slot that has people falling in love with it due to the classic symbols and features that are IGT awesome. The f...
Novomatic Jungle Explorer Free Slots Game Guide Jungle Explorer powered by Novomatic is an online slot machine that comes with an adventure theme. Players playing this game will be virtually transported to a ...
Pure Gold by Aristocrat Technologies Review Pure Gold, developed by Aristocrat Technologies, has super duper features, exciting game play, and various lucrative gaming options and it can be played fro fre...
Free Play Guide Triple Fortune Dragon Slots by I... The gaming professionals at IGT always come out with fantastic concepts in casino games be them the free ones or real money gaming versions they offer. This ent...
Balloonies iPad Pokies Machine Review & Fre... Would you mind a trip down memory lane? Of course you wouldn’t. Remember balloons and how elated you felt playing with them in your toddler days. Nowadays, kids...
Mystical Mermaid IGT Slots Free Play Guide This is one of IGT’s nautical themed iPad compatible slots so if you like games like Dolphin Treasure or Mermaids Millions then this is your go-to pokie. All th...
Play it Free Aristocrat 5 Miners Gold Slot 5 Miners Gold is a free pokies machine which comes from the Aristocrat company. In this online slot machine, players will be taken inside a gold mine where they...
Soldier of Rome Barcrest Free Slots App Soldier of Rome is an innovative action themed iPad and iPhone compatible slot game which comes from the SG Interactive stable of fine Barcrest games. As you wo...
Vivaldi’s Seasons Free IGT Slot Game Meet the ethereal women of the ancient past and explore a paradise of hidden riches and magnificent surroundings in this cracker free or real money play IGT pok...
Play Beach Bounty Aristocrat Free Slot Game Beach Bounty is a free play online slot machine and a real money game that can be found in land casinos and it comes from the Aristocrat company. This pokies ma...
From Dawn Till Dusk Novomatic Free Slots App Rev... From Dawn Till Dusk is a branded slot game developed by Novomatic. This slot is a game adaptation of the movie which goes by the same name i.e. From Dawn Till D...
Scatter Magic 2 Free Slots Game Guide Casino game players know that when it comes to slot games there is one icon that has the power of transforming the player’s fortunes quickly due to its magnific...
Noah’s Ark IGT Slots Free Play Guide From Sunday school, elementary school or even during those cold winter nights when our dads and moms used to tell us bedtime stories. So you have probably heard...
Roaring Riches Ainsworth Slot Free Play Guide Sometimes, all players need before deciding on a slot game to play is just settle for an Ainsworth title as you are always assured of a awesome gaming experienc...
Pixies Of The Forest Slots Game Guide Pixies of the Forest, the slot game from IGT shall take the players to a fantasy-filled world where pixies rule. The game gets 5 reels and 99 pay lines for the ...
Cash Express More Chilli Slot Free Play Guide Cash Express More Chilli is a fun game from Aristocrat which comes with a Mexicana theme. Mexicans are known for their love for chilli and in this online slot m...
Aristocrat Wicked Winnings IV Free Play Pokies G... Wicked Winnings IV is an online slot machine from Aristocrat. The slot is a yet another sequel to Wicked Winnings 1, 2 and 3. Aristocrat decided to create anoth...
Tags: Asian themed slots, Imperial Palace Free Slots, Red Tiger Gaming app, Red Tiger Gaming free iPad pokies, Red Tiger Gaming free iPad slots,