Reel ’em In Lobster Potty is an aquatic-themed slot game whose action all takes place on the high seas. This SG Interactive powered slot game from the Barcrest Studio will see the player coming face to face with some beautiful aquatic creatures on the game reels. If you like the Aristocrat Dolphin Treasure or the IGT Lucky Larry’s Lobstermania iPad slot then this is the game for you, we promise 🙂

To start one’s fishing adventure, players simply need to set in motion the game’s five reels that come with 20 lose paylines. Reel ’em In Lobster Potty is a mobile-friendly slot game hence players can enjoy it on their mobile devices for real cash or free excitement provided they run on Android or iOS operating systems or Windows.

** The Reel ’em In Lobster Potty Barcrest slot game may be available to play for free on your iPad, iPhone, Android, Windows device, PC or Mac. Just take a peek at our FREE GAMES PAGE HERE. ** 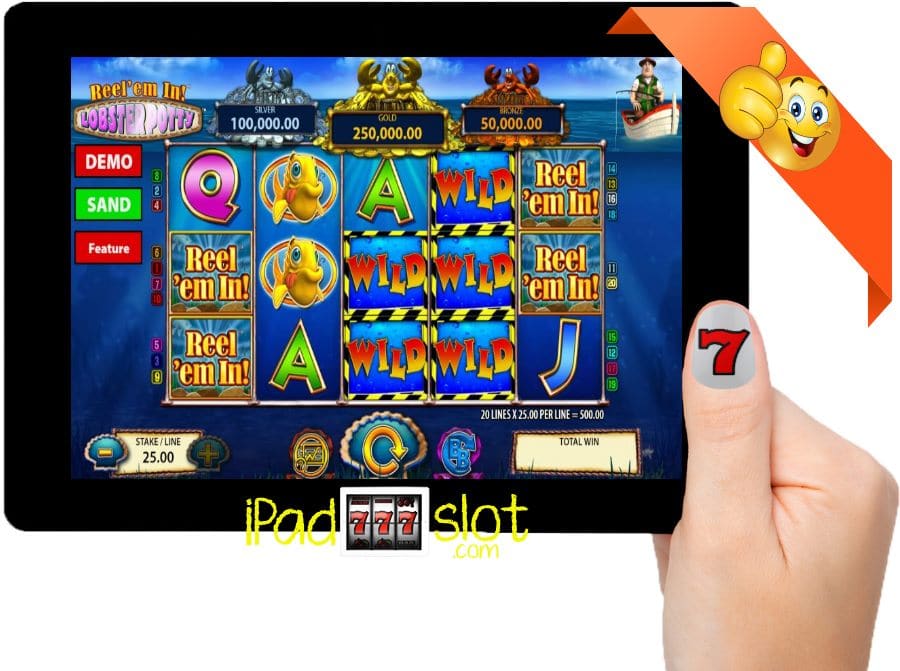 The background of this slot game depicts an ocean surface with a fisher strolling around inside a small boat. The reel section is covered by a solid blue colour which bonds well with the blue waters in the background. 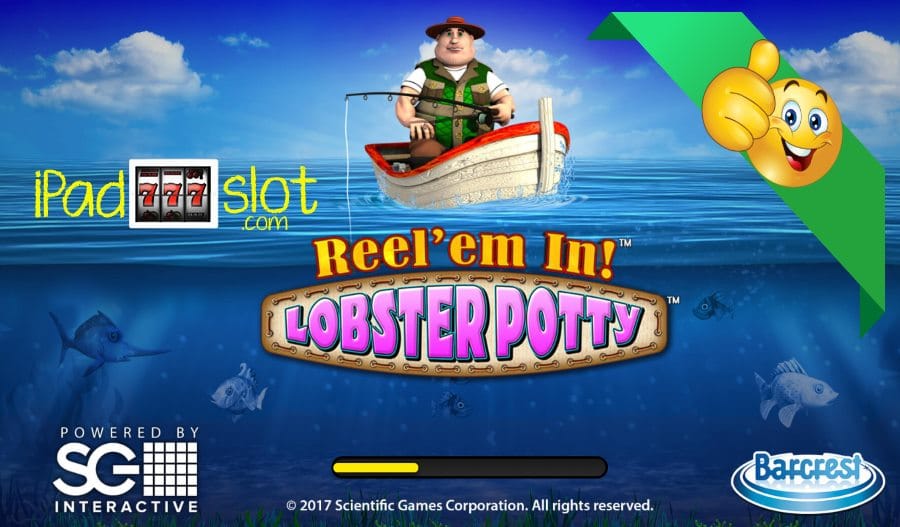 When spinning Reel ’em In Lobster Potty’s reels, players will find the following symbols on the reels: the game logo icon, an orange fish, a yellow fish, a sandy background and traditional card symbols. 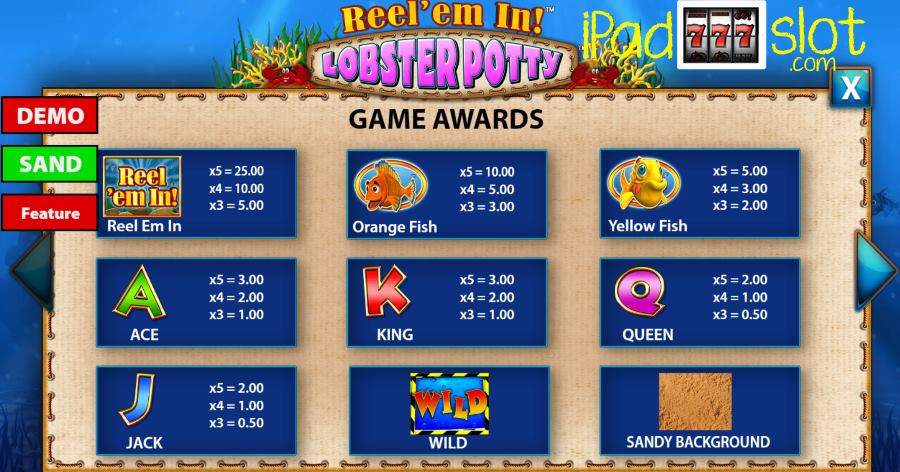 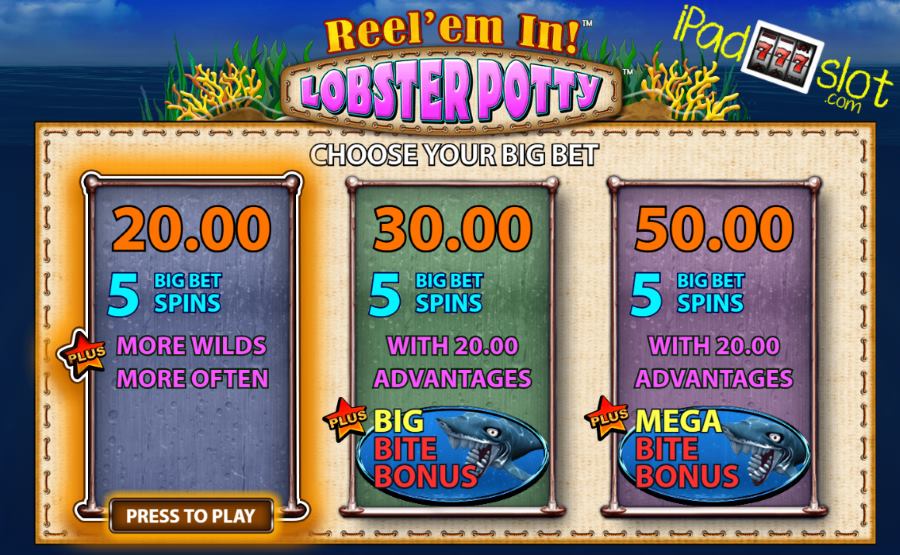 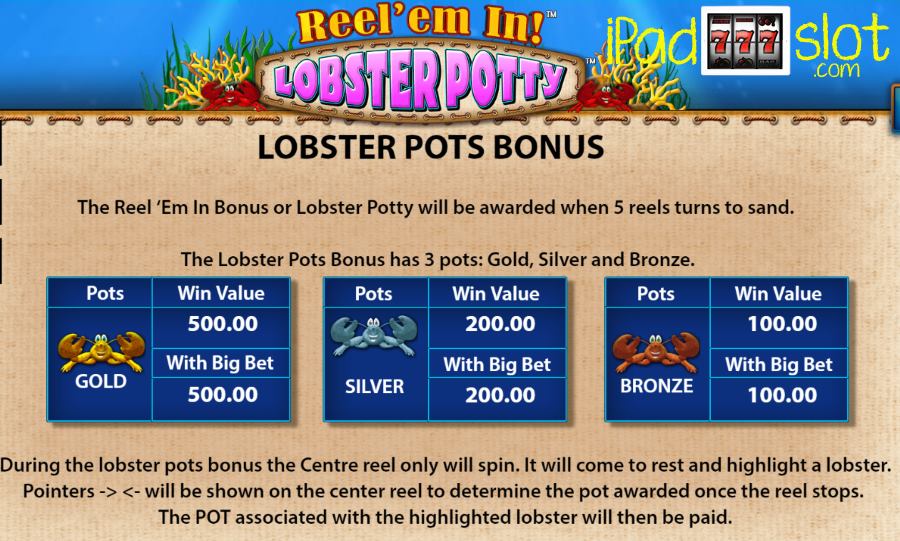 This feature is triggered manually by the player so take it or leave it. The player is given the option to pick the Big Bet Game if he wants among the 20.00, 30.00 or 50.00 Big Bet games.

Reel ‘em In Lobster Potty is a medium volatility iPad slot game which comes from the SG Interactive stable of Barcrest pokies. The RTP of this slot game range from 94.00 percent to 98.00 prcent. This slot game gets a 9 point rating out of 10 points, you can play more great free Barcrest mobile slots here.

101 Lions The Best Free Lions Themed Slots Game 101 Lions by Intervision Gaming puts the spotlight on our very own king of the jungle right from your iPad. With stellar imagery that evokes the exquisite beaut...
The Great Winaldo Free Slots Game Guide The Great Winaldo is a iPad slot game inspired by the world of magicians and illusionists. Created by IGT you are assured of some fun either online for free or ...
Faeries Fortune iPad Slots How to Play Guide Faeries Fortune is an iPad slot game that has been developed by Big Time Gaming and it offers an attractive fairytale theme that will draw in many punters. Play...
Jewel of the Arts IGT Slots Game Guide Jewel of the Arts is a Japanese slot game developed by world renowned game developer IGT. The primary focus of this game is exploring the artistic side of Japan...
Jaguar Mist Free Mobile Pokies app by Aristocrat The Jaguar Mist mobile pokies app by Aristocrat Gaming is a popular online slot and is offered by Heart of Vegas. It isn’t very new in the market and is most po...
In Bloom Free Slots by IGT Guide In Bloom is a unique and light flower themed free iPad slot game app from IGT. The has gets 5 reels, 3 rows, and 40 pay lines and a host of bonus games and feat...
Cash Spin Free Bally Slots App Game Guide Cash Spin Slots made by Bally is one of the most simple slot games out there, so make sure you grab the free Bally iOS or Android slot app and get playing. Ther...
Sumatran Storm Slots Game Guide This is one of many IGT’s animal-themed slots. Sumatra is an island found near Indonesia where one can find a lot of tigers and other wild animals. The objectiv...
Red Hot Wild Free Barcrest Slots Guide In recent times, 3 reel slots have lost their popularity a bit thanks to all the fancy games in the market with all the wiz bang graphics. However, SG Interacti...
Jailbird Mr. Cashman Slots Free Play Guide Jailbird Mr Cashman is a another totally awesome slot game from the Aristocrat company. This slot follows the adventure of Mr Cashman, a popular gold coin figur...
Aristocrat 5 Frogs Game Free Play Guide Aristocrats 5 Frogs is a pleasant, exciting, and vivacious iPad slot game that features the classic oriental theme. If you're an absolute fan of Asian-themed sl...
White Wizard Free Play Slots Game Guide White Wizard is a aweome fantasy genre iPad compatible slot game from the Aristocrat stable. The game is inspired by the tales of witches and wizards. Though wi...
Hexbreaker 2 Online Slots Free Game & Revie... The crazy jumping black cat is back in the Hexbreaker 2 online slot that's compatible with iPad, Android and iPhone. This slot game from IGT is about black magi...
IGT 777 Sizzling Hot Roll Free Slots This is a game from the good old days but it's still an entertaining slot from IGT plus it's iPad and iPhone compatible. This game is pretty simple, it doesn’t ...
Wheel of Fortune Megaways Free or Real Play Guid... WHEEL OF FORTUNE MEGAWAYS QUICK START GUIDE Wheel of Fortune Megaways is an IGT powered online slot based upon the popular TV show of the same name. Just as th...
Heart Throb Free Aristocrat Slots App Guide There are different things that make people’s hearts pump harder. To some, the simple sight of their loved ones make their blood run faster and their heart pump...
10 Great IGT Free or Real Money iPad, iPhone ... When it comes to game developers, there are few (if any) that are more accomplished than IGT. This company was established all the way back in 1975, since then,...
Midnight Stampede Super Stampede Free Play Guide There is a negative connotation that comes with the word ‘stampede’. Most of the time when this word is used, it is when there is a tragedy of sorts. However, A...
Motorhead NETENT Free Slots App Guide Motorhead is a branded slot game which comes from one of the world’s most renowned game developers i.e. NETENT. This online slot machine is based on the popular...
Lucky Lady’s Charm Deluxe 6 Free Slots The Lucky Lady's Charm is one of the most popular iPad slot series in the gaming market, this Novomatic slot is the latest edition and the third in line thuus f...
Tags: Barcrest free app, Barcrest free iPad pokies, Barcrest free iPad slots, Reel 'em In Lobster Potty slots,