Animal themed video slots are very common in casinos today, everyone loves Big Red and Buffalo but what makes Rhino Rush unique from other titles is the sleek design and of course, the jackpot feature. This pokies game from the Aristocrat Gaming developers will take you on an African adventure where wild animals wander freely – sounds cool so far yes!

The game comes with five reels, four rows and an array of bonus features to enhance the play and excitement. There are up to 20 free games to be awarded and two progressive jackpots.

Rhino Rush is available both on mobile and PCs and is offered for free at Heart of Vegas Real Casino Slots. Find out more about this slot machine by reading our comprehensive reviews. 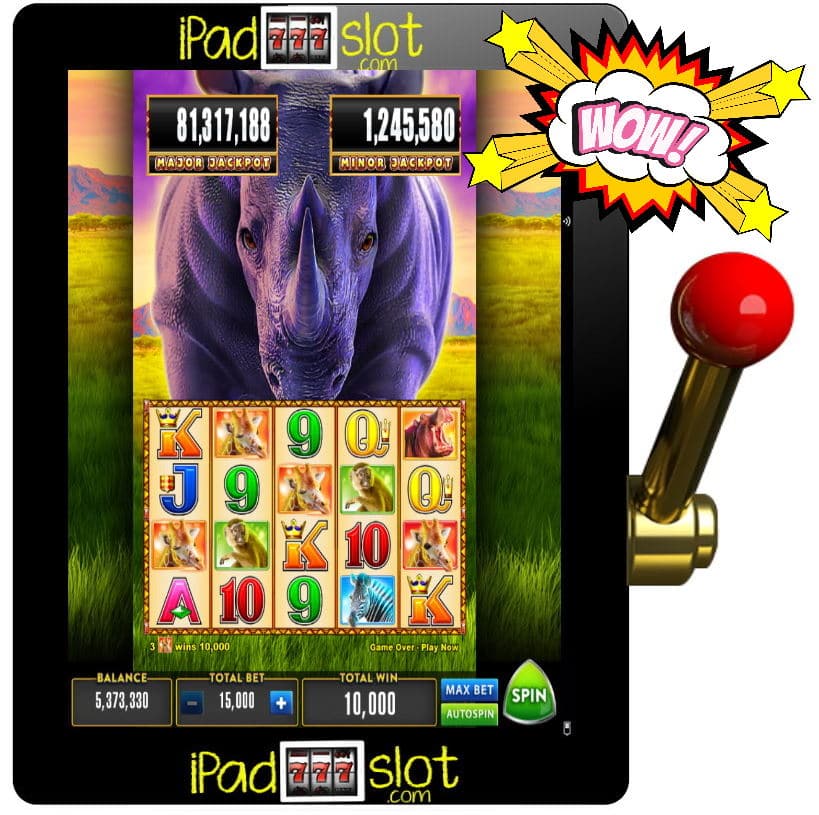 ** Similar popular slot games to Aristocrats Rhino Rush pokies machine might be available on this site to enjoy for fun or real moolah gaming action on your iPad, iPhone, Android, Windows gadget with or without an app download. Just take a peek at our FREE games page here. ** 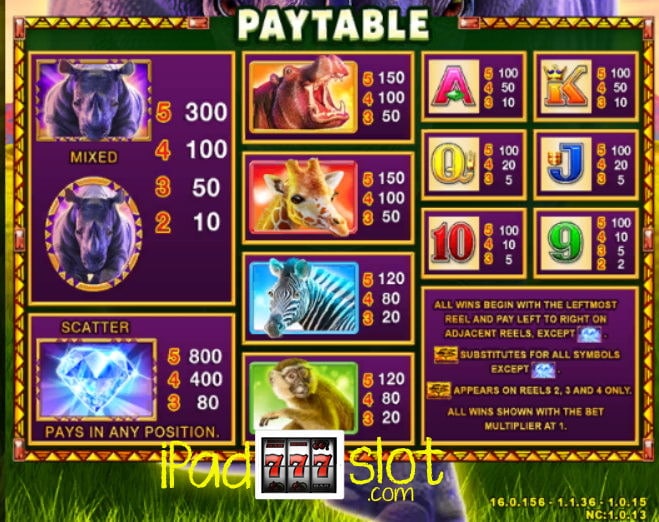 As aforementioned, this is one of the most appealing video slot games from Aristocrat developers. The game is built with crispy graphics, excellent soundtrack and beautifully animated symbols. You will see a rhino walk across the screen when you hit on the ‘Spin’ button, and several raging rhinos will appear when it forms part of the winning combinations.

The background of the game features an extensive green land with vegetation and hills. The symbols are on the reels include different wild animals including a hippopotamus, a giraffe, a zebra, a monkey, a rhino as well as traditional poker cards Ace, Joker, King, Queen, 10 and 9. 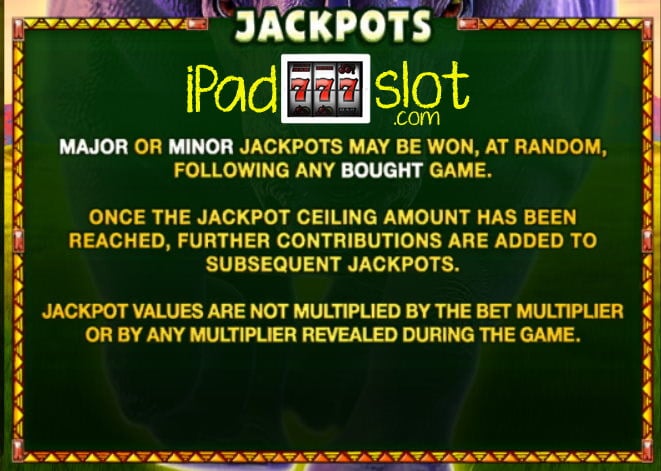 Rhino Rush slot offers a thrilling gaming experience, be it on smartphones, tablet, or desktop.  The reels are played for a reel cost of 50 coins plus 25 coins for the Rush Bonus. All the wins except jackpots are multiplied by the bet multiplier.

You will find a familiar playing field with five reels and four rows. You need to land a minimum of three symbols left to right to win a prize.

There is an easy to use control panel with all the required functions to play. You can play Rhino Rush in Max Bet or Autoplay modes as you like. 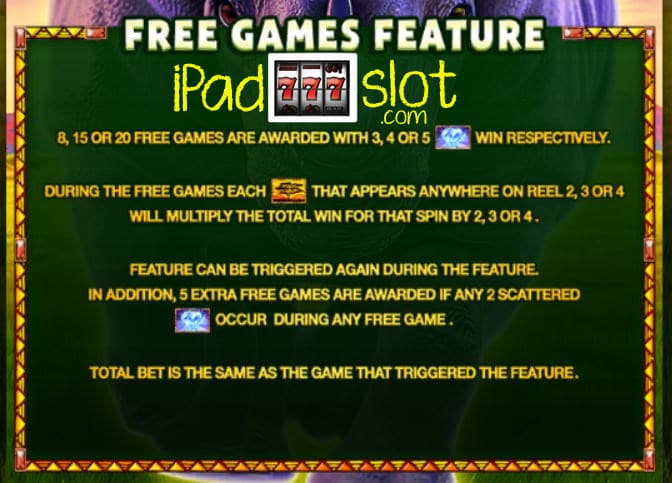 This is yet another exciting Aristocrat pokie to play on your iPad or iPhone, we score this big 8.5 points from 10.

Sword of Destiny Bally Free Slot Game Sword of Destiny is a mythical themed slot game in the Bally Studio developed by SG Interactive. When playing this online slot game, players can expect to meet ...
Glitter Gems by Ainsworth Free & Real Play ... Glitter Gems exciting iPad compatible slot machine game by Ainsworth gaming, it's a spectacular example of how to engage players in a eye candy theme which Ains...
Go Bananas iPad Slot Machine Review and Free Pla... Many players will go ape over Go Bananas and the entire iPad slot machine game is based on monkeys as you already worked out. The symbols that are used on the r...
Cluedo Who Won it? iPad Slots Free Play Guide Cluedo – Who won it? slot machine from IGT is an interactive suspense and crime themed game that is a cracker. It is based on a popular board game that goes by ...
Hitman slot review & game guide Hitman slots is based on the popular movie and also versions on X-Box and Playstation are available. With a jackpot of 4000 coins and some really big prizes and...
Wings Over Olympus Free Slots Game Guide Wings Over Olympus is an ancient-themed with a military feel slot game which comes from the Aristocrat stable of awesome free mobile slot games. To start one’s ...
Treasures of the Pyramids Free IGT Slots Guide Egypt is known as the home of pyramids. It's not difficult to see why this is so because if you plan a visit to Egypt today you are going to find some incredibl...
88 Riches GameArt Free Slot Guide 88 Riches is a 5-reel slot from GameArt. With 243 bet ways, the game has an unknown RTP, unknown variance, and four types of jackpots bonuses. 88 RICHES QUICK ...
Bombay Slots Game by IGT Free Play Guide This Indian themed slot from IGT borrows much of its inspiration from other IGT themed slots as the setting is set against a wealthy themed tone. This game take...
Rainbow Riches Fortune Favours Free App Bravery is the sole virtue that you need to start your adventure in Rainbow Riches Fortune Favours. Just as the saying goes, fortune favours the brave, to enric...
Fu Star Free Lightning Box Free Slot Game App Fu Star is an online slot machine which comes from the Lightning Box stable. This online slot game comes with an oriental theme and as such, when spinning the r...
Elephant King Slots by IGT Game Guide Elephant King is a awesome game made by IGT and is good to play on your iPad or iPhone from our casino guides. It was released in about 2017 ish' for online and...
Imperial Wealth Slots App by Konami Guide Imperial Wealth is an oriental themed slot game from Konami which celebrates Chinese traditions, power and strength. For players to start playing Imperial Wealt...
Queen of Atlantis Slots Free Play Version Its time to dive deep into the ocean waters in this five reel Aristocrat powered iPad slot. Players playing this slot game are forced to enter into the ocean as...
Quickspin Dragon Shrine Slots Game Guide Dragon Shrine is a iPad slot dedicated to dragons that are often themed into scores of slot games. And yes, you guessed it right, it belongs to the Chinese them...
Pacific Paradise IGT Free Mobile Slot Review The underwater world is a world of aquamarine life and just like the way of life at the bottom of the ocean, IGT has recreated an video slots game that features...
Shamans Dream Free Aristocrat App Review & ... With Shamans Dream, you will step into the fascinating world of Native America & discover the most sacred & oldest traditions. This is another online vi...
Wacky Races Bally Free Slots App Wacky Races is a branded slot game developed by Bally Technologies. However, odds are, not many people may know where the game was adapted from if they were bor...
Mighty Cash Sacred Scarab Free Slot Game Guide Mighty Cash Sacred Scarab is an Egyptian themed online pokies machine from Aristocrat. The game comes with an adventure theme as players are taken on a voyage o...
Crazy Rich Asians Slot Preview, Where to Play Re... Aristocrat has partnered up with Warner Bros. Consumer Products to develop and release the Crazy Rich Asians slot machine for casino punters. The Crazy Rich ...
Tags: Aristocrat android slots free, Aristocrat free iPad slots, Aristocrat free pokies, Aristocrat iOS free slot app, Aristocrat ipad pokies free, Aristocrat iphone pokies free, Aristocrat iphone slot free, Aristocrat pokies app free, Aristocrat slot app free, Aristocrat social pokies, Aristocrat social slots. Aristocrat android pokies free, Aussie free pokies, Aussie pokies, Rhino Rush pokies, Rhino Rush slot,