The Japan-O-Rama iPad compatible slot machine game by Rival Gaming is a perfect fusion mixture of modern and ancient gaming structure. The game has characters and slot layout of Japan from the past and present like the bullet train, robots, samurai swords, Japanese girls and a kitty cat of just a few symbols worth mentioning.

With 20 paylines and 5 reels, the game is a fun slot for all slot lovers. Japan-O-Rama is a complete package of what can be seen in the cultural diversity of Japanese lifestyle. Right from the major to minor symbols, every single of them contributes to a great levels of gaming fun. 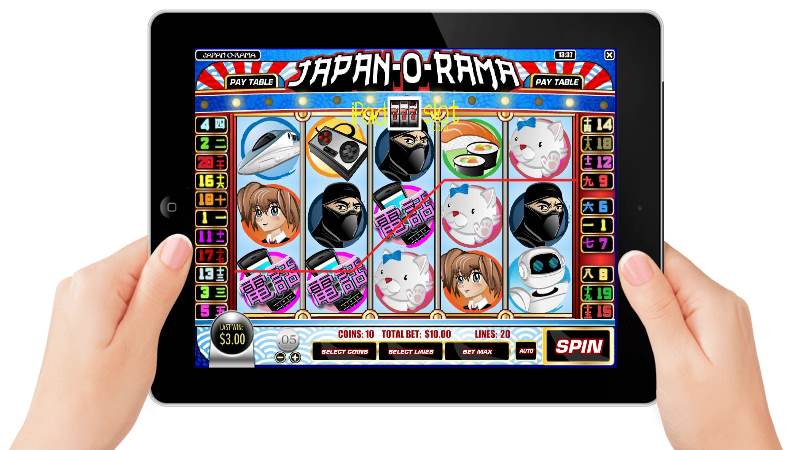 The reel symbols of the game include typical Japanese characters such as Geisha Girls, Samurai, Sushi, Sumo Wrestlers and many more. 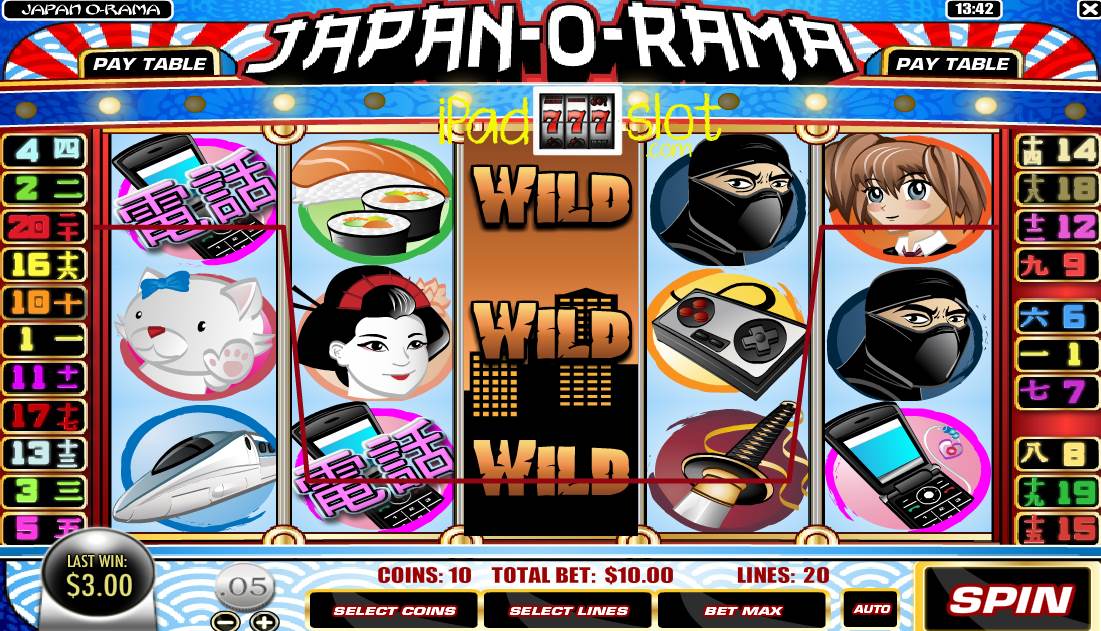 Japan-O-Rama pokies machine game is one of the most entertaining games created by Rival Gaming thus far. It portrays Japan in an innovative fashion like never before in a slot game. Play this game for free or real bucks from our iPad casino guides. We give this slot a rating of 6.8 from 10 points in our scorecard.

Mystic Fortune Habanero Slot Game Guide Mystic Fortune Slot Game Review The Habanero 5 x 3 reel slot game Mystic Fortune comes with 25 paylines and it's themed about China. Slot Layout The culture ...
Golden Lotus RTG Slot Game Review The RTG Golden Lotus is yet another China-themed slot game, and it has reels of 5, pay lines of 25 and a jackpot feature. Golden Lotus Slot Guide A Chinese ga...
Soldier of Rome Barcrest Free Slots App Soldier of Rome is an innovative action themed iPad and iPhone compatible slot game which comes from the SG Interactive stable of fine Barcrest games. As you wo...
Ellen’s Road to Riches Free Slot Game App Below we talk about just a few of the features of this app, this is a really cool social casino set-up and we review some of the best features of the app. In ca...
Pearl River Ainsworth Slot Game App Review Pearl River is an aquatic-themed slot game from the Ainsworth stable of super pokies. This slot has a number of elements that make it appealing. First of all, i...
Cash Express More Chilli Slot Free Play Guide Cash Express More Chilli is a fun game from Aristocrat which comes with a Mexicana theme. Mexicans are known for their love for chilli and in this online slot m...
Jackpot Reef Hunters Free Slots Guide Jackpot Reef Hunters is an online slot machine from Aristocrat comes with an aquatic theme. Instead of fishing for dinner, players in this slot game will be fis...
Sugar Pop iPad Slot Game Review and Free Play Those that are already addicted to Candy Crush will be thrilled with this new slot game from Betsoft. Sugar Pop is a 3D slot game that is one of the most colour...
Zorro the Tale of the Lost Gold Review & Fr... Did you know the character, "Zorro" one of the most popular heroes in Mexican and American folklore that has been themed into movies, comic books TV shows and g...
Fortune Falcons Wild Respins Free Ainsworth Slot As the name suggests, Fortune Falcons Wild Respins is a slot release from Ainsworth focused on incredible the wild respins feature bonus round. Fortune Falcons...
Crystal Cash Ainsworth Free Slot App Guide Crystal Cash is a big riches themed slot game created by the Ainsworth company. The slot was primarily played as a land-based slot machine but due to the popula...
Golden Eagle IGT Slots Game Guide The eagle is one of the most sacred animals in the world and most religions and cultures regard an eagle highly. In Asia, the eagle symbolizes courage, strength...
Aristocrat Zorro Free Online Slot Game Guide The Zorro online slot game is powered by Aristocrat Technologies, it features a variety of twists and turns in the bonus features that we keep you entertained a...
Solar Disc Free IGT Slots Game Solar Disc is a game from IGT which comes with an Aztec theme. This slot was first created for land-based casinos but after having seen how popular it was in la...
Volts and Bolts Shuffle Master Free App Guide Just as you can expect by just reading the title of this SG Interactive powered slot game from Shuffle Master, your adventure in Volts and Bolts will be nothing...
Ainsworth Jade Emperor King Strike Free App Guid... Jade Emperor King Strike is a progressive slot game which comes from the Ainsworth stable of brilliant free and real money pokies machines. This Asian themed sl...
Bunny Eggs IGT Slots Game Guide IGT brings us this Easter themed slot where some cute little bunnies offer you a set of yummy Easter eggs, also some impressive rewards can be had while on your...
Capital Gains Free AGS Slot Game Guide AGS is one of the very best game developers  of slot machines for brick and mortar casinos in the USA. One of the game developer’s trademark slot machines found...
IGT Black Widow Free Slots Play & Review The "Black Widow Slot" game is a unique and interesting IGT social iPad pokie that can be played at the Double Down Casino for FREE - yes that's correct no mone...
Fat Choy Choy Sun Online Slot There is a saying which states that too much of anything is bad. Ardent believers of this saying state that too much of food can be a bad thing – well, this is ...
Tags: Asian themed slots, Japan-O-Rama, Rival free app, Rival free iPad pokies, Rival free iPad slots,