Rocket Fellas Inc is an adventurous slot created by the game studio Thunderkick. It is a high-variance slot game with 5 reels, four rows, and 30 fixed paylines. You can really immerse yourself in the gameplay thanks to its interactive and bright design and numerous bonus features.

The style of this slot is cartoonish, with dwarves that have brightly colored beards and precious gems in funky colors. The design of the slot is a diamond mine with rocks and wood scaffold on both sides of the game board.

The main attraction are the four miners, and each of them is animated as they land on the reels. The dwarfs are mining for gemstones, and they are using barrels of explosives and rockets to do a quick hit and run. 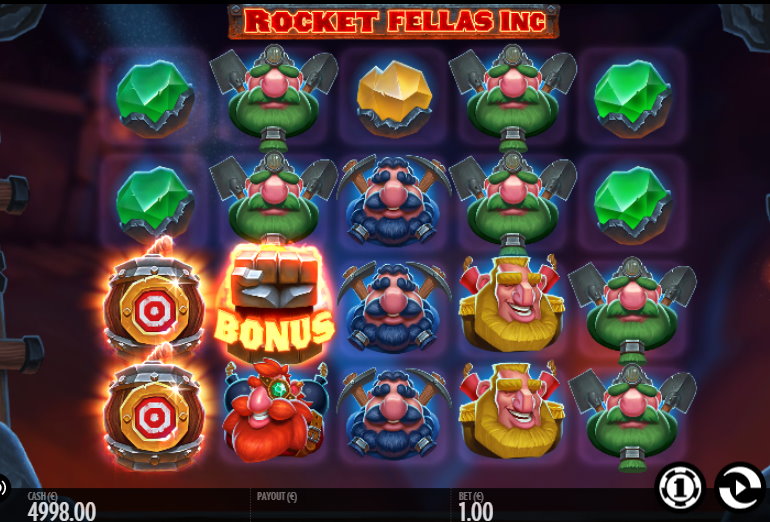 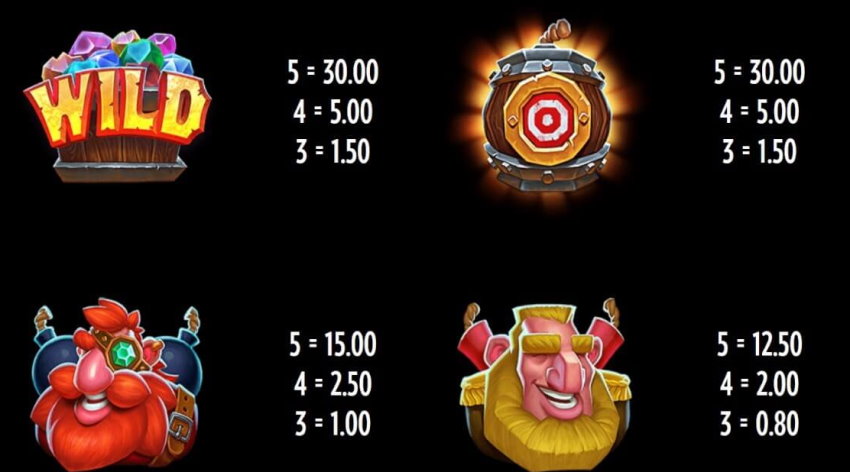 This slot has a great 1970 funk soundtrack. Its bouncy music makes the game even more appealing and you can groove to the rhythm of the music while you place your bets.

The Wild symbol is represented by the mining card filled with shiny rocks, and it can replace all of the other symbols except the scatter symbol. Landing five Wild symbols will reward you 30 times your bet.

The Rocket features appears on the left reel and it will convert symbols into wilds. If there is a barrel in the same row as the Rocket symbol, the Rocket will also transform the barrel into a wild symbol, alongside other barrels on the same reel. 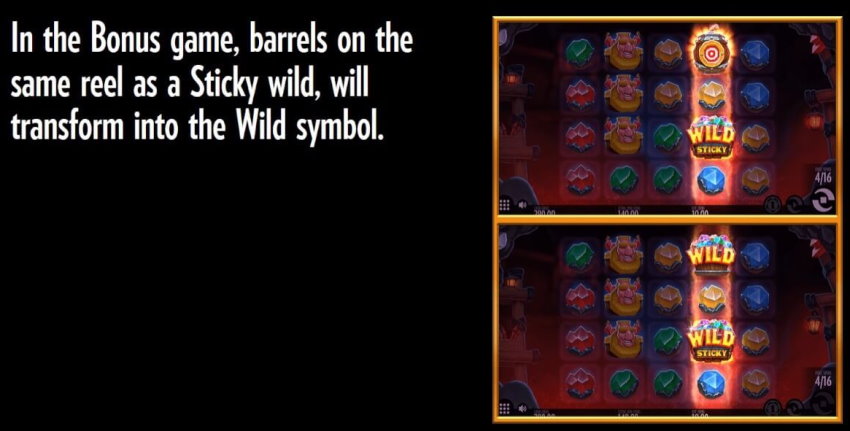 With the Hot Reels feature, the Barrels located on the same reels as the Sticky Wilds change into Wilds and increase your prize.

Rocket Fellas Inc has a minimum bet of $0.10, and a maximum bet of $100 per spin. Payouts are up to 732,500 times your stake. The game’s RTP is 96.10%, which can be helpful to extend those mining expeditions. Although an RTP of 96.10% might not blow your socks off, combined with a high volatility, you should be happy with the rewards you get from this slot.

If you want to play more games by Thunderkick, try Barber Shop Uncut, a slot famous for its Inwinity Spins, a decent RTP, and a great bonus round. Another great slot by Thunderkick is Wild Heist at Peacock Manor, which is a very interesting mix between a Pink Panther themed slot and Oliver Twist styled characters.

You may also want to explore Babushkas by Thunderkick which offers prizes of up to 390x your stake. If  you enjoy the mining theme, then you’re surely going to like Gold Miners, a slot released by Mr. Spotty, that provides a double-up round, lucrative wild payouts, and free spins. 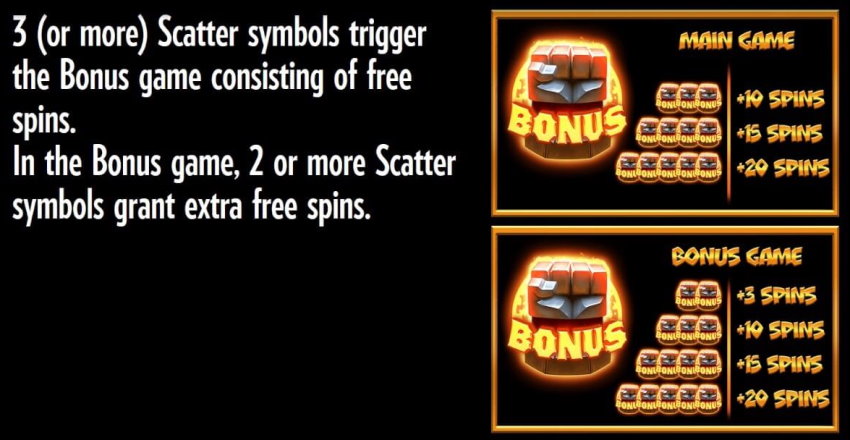 We loved that Rocked Fellas Inc offers above average paylines, straightforward gameplay, and the wild-rich bonus feature. Although the game has a comparatively low maximum win, it makes up for it with its exciting concept and its hilarious characters.

Rocket Fellas Inc’s animations, design, graphics, and music are greatly done, and the game offers some incredible features like the Hot Reels, Sticky Wilds, Barrel Symbols, and Free Spins. So, make sure you give this slot a try!

Microgaming Highlander Free Slot Guide Highlander is a branded slot game which comes from Microgaming. Based on the widely popular Christopher Lambert movie set in the Scottish Highlands, players loo...
Safari Spirit Ainsworth Free Mobile Slot App Safari Spirit is an online slot game from Ainsworth which comes with a African wildlife theme. Players playing this online slot machine can expect to be virtual...
Ghostbusters Slots Free Game by IGT Review Ghostbusters is a branded game which comes from the IGT stable of amazing iPad slot game apps. This slot is a game adaptation of the popular movie series which ...
Fairy Queen Novomatic Free Slot Game Guide Slots offer players an opportunity to escape the daily struggles of the world and find comfort in a virtual world where everything is perfect and there are no s...
Noah’s Ark IGT Slots Free Play Guide From Sunday school, elementary school or even during those cold winter nights when our dads and moms used to tell us bedtime stories. So you have probably heard...
Gold & Dragon Free Slots Game Guide Gold & Dragon is an oriental themed slot game from IGT. The game is one of the newly released progressive games from the IGT stable which comes with four pr...
Girls With Guns Frozen Dawn iPad Slot Free &... Developed by Microgaming the Girls with Guns – Frozen Dawn slot for iPad game is based on a heroine theme, nothing but chicks with big weapons. In this game, pl...
Free Play Lightning Blast Sunset Ace Slot Guide Lightning Blast Sunset Ace is an Aristocrat powered free online slot machine. Falling under Aristocrat’s massively popular ‘Lightning Blast’ series of awesome p...
Da Vinci Diamonds Dual Play Free Version Da Vinci Diamonds Dual Play is a five-reel iPad slot game from IGT that gets 40 pay lines for the players to enjoy. The game has a 5x6 format that allows the pl...
Bubble Craze Slots Game Guide Bubble Craze is a popular iPad slot machine game developed by the famous developers of this era IGT gaming. The game possesses aqua-based natural phenomenon cal...
Aristocrat More Chilli Emerald Edition Free Slot... Crank up the heat in this deliciously diabolic Mexicana themed online pokies game from Aristocrat, Australia’s number 1 gaming brand with roots in land based ga...
Motorhead NETENT Free Slots App Guide Motorhead is a branded slot game which comes from one of the world’s most renowned game developers i.e. NETENT. This online slot machine is based on the popular...
Lady of Egypt Williams Slot Casino App Lady of Egypt is an ancient Egyptian themed slot game which comes from the SG Interactive stable of fine Williams games. This online slot game is unique in many...
Wealthy Monkey Free Konami Slots Game App Wealthy Monkey is an orient themed slot game developed by Konami which primarily focuses on the monkey as you might have deduced from the title already. Players...
Silver Lion by Lightning Box Free Play Guide Silver Lion is an  slot game developed by Lightning Box. This is a 5 reel game that offers 1024 ways of winning. Players are provided with an opportunity to tak...
Amazon Temple Free Slots Game Review The Amazon from tales we hear from those who had the privilege to visit the place is a huge jungle with densely populated trees, evergreen vegetation and also a...
Reel King Free Spin Frenzy Slots App Reel King Free Spin Frenzy is a "back to basics" fruit themed iPad slot game from the Novomatic. This video slot app is one the best in the Reel King slot serie...
The Lovely Outlaws Free High 5 Games Slot Game The Lovely Outlaws is a High 5 Games powered slot that comes with a wild west theme. Normally, wild west themes feature male characters but that’s not the case ...
The Huntress Aristocrat Slot Free Play Guide The Huntress is an free online slot machine which comes from the Aristocrat studio. Just as can be deduced from the title, this online slot machine does come wi...
Dream Date Slot Game Guide Dream Date Slot Game Review Dream Date is an online slot which comes from Microgaming. This game comes with a dating theme as per the title. To start perfec...
Tags: Rocket Fellas Inc,