Sacred Guardians is a awesome animal themed slot game from Aristocrat. This is a 4 level progressive game which features some cute animals on the reels. Anyone looking to play Sacred Guardians can easily do so by playing the game either on their desktop computers or on their mobile devices as the game is fully compatible on mobile devices running on Android, Windows and iOS operating systems at the Cashman casino on facebook. You might see this game also at your local gaming club or casino for some real moolah action.

This game comes with six reels and 80 paylines. A mist filled landscape acts as the background of this iPad slot game. 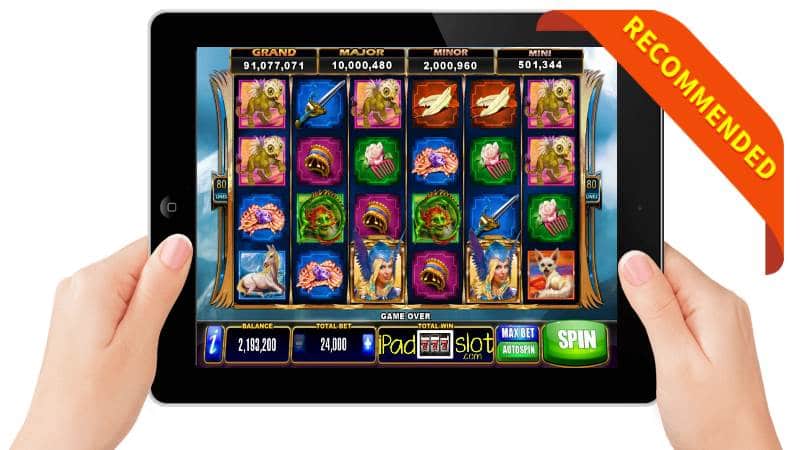 ** The Aristocrat Sacred Guardians slot game might be available to play for free fun or real cash on your iPad, iPhone, Android, Windows device, PC or Mac. Just take a look at our online casino guides here. **

When playing Sacred Guardians, players will find the following symbols on the reels: the Sacred Guardians game logo, lady clad in blue, green clown icon, a lion, a horse, a cat, a sword, a drum, feathers, rake, and a red and white piece of cloth.

Sacred Guardians is an entertaining Aristocrat iPad slot game which appeals to all types of players be it low rollers or high rollers. This slot gets an 8.3 point rating out of 10 points in our game review.

IGT Wishwood Free Slot Game Guide Wishwood is a mythical themed slot game which comes from the IGT company. In this mythical world, players can simply make a wish and whatever they wish for will...
Cayetano Gaming Asian Riches Slots Game Guide Asian Riches by Cayetano Gaming is a classic example of how modern slot machine games has risen up the popularity charts with iOS players. The game, based on As...
10 Top Asian Inspired Free or Real iPad, Android... When it comes to slot games, there is one game collection which is undoubtedly the biggest collection (theme wise) i.e. Asian themed slots. Virtually, all game ...
Portomaso Gaming Sushi Booshi Mushi Free Slots R... Sushi Booshi Mushi, no it is not a Japanese recipe if that's what you are thinking and it's a mouthful of a game name that's for sure. Instead this is a recipe ...
Midnight Soiree Free IGT Slots Game Guide Midnight Soiree is an online slot machine which comes from the IGT company. This game comes with a masked ball theme and as such, players looking forward to try...
Aristocrat Polynesian Pearl Free Slots Guide Are you looking forward to try out a fun tropical themed game? Well, if yes, then this free iPad slot game will be quite apt for you. "Polynesian Pearl" is a...
Tokidoki Lucky Town Free Slots by IGT Tokidoki Lucky Town is a branded iPad casino game which has rows of 3 and reels of 5. Simone Legno in association with IGT developed this casino game. The Tokid...
Wealthy Monkey Free Konami Slots Game App Wealthy Monkey is an orient themed slot game developed by Konami which primarily focuses on the monkey as you might have deduced from the title already. Players...
Wonder 4 Jackpots Free Slots App Guide Wonder 4 Jackpots is an innovative game from the Aristocrat stable and it can be played online for free at the Heart of Vegas casino or for real cash at your fa...
Gold & Dragon Free Slots Game Guide Gold & Dragon is an oriental themed slot game from IGT. The game is one of the newly released progressive games from the IGT stable which comes with four pr...
Wild Lepre’Coins Slots by Aristocrat Free ... "Wild Lepre'Coins" by Aristocrat is truly inspired by classic Irish folklore and its unique culture. Thus you will notice a lot of greenery on the pokies reels ...
Quickspin Dragon Shrine Slots Game Guide Dragon Shrine is a iPad slot dedicated to dragons that are often themed into scores of slot games. And yes, you guessed it right, it belongs to the Chinese them...
Aristocrat Portal Fortunes Aztec Relics Free Slo... Portal Fortunes Aztec Relics is an Aristocrat powered online slot machine that comes with an Aztec theme. Players who love Aztec  themed games will enjoy this a...
Spellcast NetEnt Free Slot Game Review Spellcast is a popular game widely present in online casinos. This is the creation of NetEnt. This game has 5-reels, 3-rows, 20-pay lines and a unique feature. ...
Preview of the Flowers NETENT iPad Slots Game With Flowers, iPad players will enjoy a flowery themed game that is packed with features. The game from NETENT is fun in free play and a real money version and ...
Cashbull Free Slots Game Guide The title of this slot really does say it all, this game is all about cash. When playing this Aristocrat powered slot game, players can expect to find on the re...
Lord of the Ocean Novomatic Free Slot Game Guide Lord of the Ocean is a unique slot game that comes from the Novomatic company. As players may probably deduce from the game’s title, the game comes with an aqua...
Fu Nan Fu Nu Free AGS Slot Game Guide The oriental theme is one of the most popular genres among slots players. Its crystal clear to see the reason why this is the case as the oriental theme allows ...
Cleopatra Plus Slots Game Guide Cleopatra Plus is an iPad compatible slot game by IGT Gaming whose theme is based on the Egyptian Queen and the time of her rule. The game comes up with as much...
NextGen Tianlong Slots Game Review The Dragon is a sacred symbol in the oriental way of culture because it is thought to be lucky for the people. This iPad slot machine has been developed jointly...
Tags: Aristocrat free iPad pokies, Aristocrat free iPad slot app, Aristocrat free iPad slots, Aristocrat Free Slot App Article Tags, Sacred Guardians Slots,