Casino game players know that when it comes to slot games there is one icon that has the power of transforming the player’s fortunes quickly due to its magnificent magic i.e. of the scatter symbol. The scatter symbol is the symbol which is responsible for triggering many bonus rounds in games, on some occasions it carries the game’s highest payout and on many other games, it has the capability to pay both for winning combinations originating from the left and those originating from the right (but not that many).

In this version Aristocrat pays tribute to this special symbol nicely. To start one’s adventure in this iPad slot game, players simply need to spin the game’s five reels that come with 20 super winning paylines.

The background of this slot game depicts nighttime, there is a half moon dimly illuminating the reels and some owls eerily staring at the player. The reels of the slot are covered by a solid purple colour. 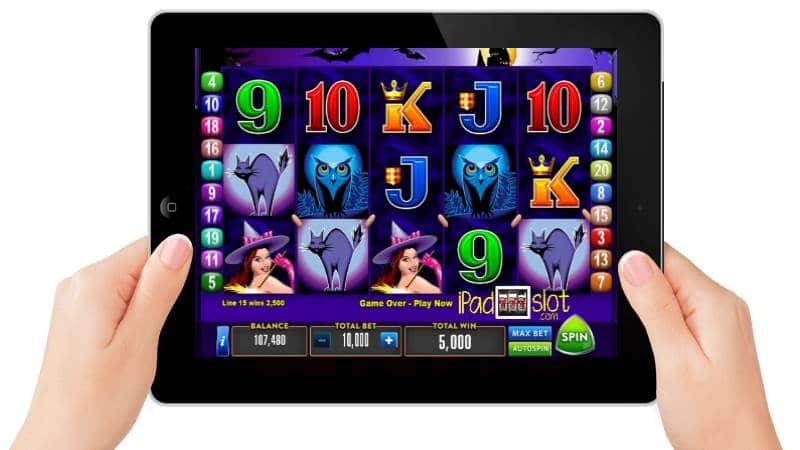 The symbols on the reels in this game include an owl, a black spider, a scarecrow, a bull, a pumpkin and a witch. There are also traditional card symbols.

Scatter Magic II is a iPad slot game that pays homage to the original version very well. With super scatter symbols and as such all winning combinations in this game operate in a way that all scatter wins operate in i.e. they pay both from left and from the right. This game gets a 7.5 point rating out of 10 points in our Aristocrat iPad slot reviews.

2Can Free Aristocrat Slots Game 2Can Free Aristocrat Slot Review Embark on a journey through the exotic jungle forests on the reels and unlock the hidden treasure bonuses Aristocrat has creat...
Aristocrat Wonder 4 Stars Slots Free Play Guide "Wonder 4 Stars" is an exclusive Multi-Play masterpiece from Aristocrat that can be played for free on an iPad or for real money at many casinos around the rock...
Moon Festival by Aristocrat Slots app for iOS There are a lot of slot games with Oriental themes that have been published by Aristocrat, and Moon Festival certainly calls to mind slot games like 50 Dragons ...
Dragons Myth Slots by Rabcat Free Play Guide The Dragons Myth iPad compatible slot is powered by Rabcat software platform and features 5 reels and 20 paylines. It takes you on an exciting journey of a brav...
Rawhide Slots by Konami Free Play Version Rawhide is a western themed iPad compatible slot game from Konami which can be played for free or real cash at our select casinos. Though this game comes with t...
In the Shells IGT Slots Game Guide This is another nautical themed slot game from IGT developed in the same genre as other water and ocean themed slots from the same developer. Quick Start Guide...
Fu Dao Le Bally Tech Free Slot Game Guide Fu Dao Le is an oriental themed iPad slot game that comes from Bally Technologies. When playing this game, players will be love the stunning graphics of the Chi...
Triple Cash Wheel Bally Free Slot App Retro themed old school slots are a favourite of many casino players. In this slot game, Bally decided to give fans of retro-themed slots something different th...
Grand Bazaar by Ainsworth Free Slot Game Review Do you really like the classic old tales of the Arabian Nights, for example, Aladdin or Ali Baba & the 40 Thieves? Well, if yes, then "Grand Bazaar" will be...
Fortunes of Atlantis Aristocrat Free Mobile Poki... Fortunes of Atlantis is an free mobile pokies app game by Aristocrat that is inspired by the sunken city of Atlantis. This mythical civilization & its cultu...
Aristocrat Portal Fortunes Aztec Relics Free Slo... Portal Fortunes Aztec Relics is an Aristocrat powered online slot machine that comes with an Aztec theme. Players who love Aztec  themed games will enjoy this a...
Prosperity Lion PG Soft Online Slot Review PROSPERITY LION QUICK START GUIDE One of the most celebrated Asian Emperors; Jiang Nan once narrated one of his dreams. In his narration, he said that a huge l...
Wheel of Fortune Triple Stars Free Slots Game Ap... Wheel of Fortune Triple Stars is a iPad slot game app is meant for the high rollers as the game is all about class and good living. It does not take much for th...
Captains Fortune IGT Slots Free Play Review Captain Jack Sparrow has captured the hearts of many folks both old and young due to his witty, cunning and funny behaviour on set. Since the debut film of the ...
Dancing Drums Shuffle Master Free Slot App Dancing Drums is a exciting and colourful Asian themed iPad slot game app from the SG Interactive stable of Shuffle Master games. With the symbolic red and gold...
Konami China Mystery Slots App Game Guide Asian themed slot games are a favourite of many and in an attempt to provide even more great oriental themed games to casino players, Konami has developed this ...
Book of Maya Novomatic Free Slots Game App Book of Maya is an Aztec themed slot game developed by Novomatic. This slot game traces the adventure of an ancient explorer who travelled the world in search o...
Sacred Guardians Slots Free Play Guide Sacred Guardians is a awesome animal themed slot game from Aristocrat. This is a 4 level progressive game which features some cute animals on the reels. Anyone ...
Crazy Cows iPad Slot Game Free Preview The barnyard is full of action and players will be sure to collect some great payouts from Crazy Cows by Play’n Go. This iPad slot game is super exciting and wa...
Wheel of Fortune Double Diamond Free Slots Guide Wheel of Fortune Double Diamond is one of the games from IGT which comes with a retro theme though it was created in the era of old school slots. This iPad comp...
Tags: Aristocrat free iPad pokies, Aristocrat free iPad slots, Aristocrat Free Slot App Article Tags, Scatter Magic 2 Free Slots,