So Much Sushi Slots by Microgaming Guide

With reels of 5, rows of 3 and paylines of 25, So Much Sushi is a Japanese game that depicts food habits and culture of the people of Japan. It is developed by Microgaming, which creates a mystic environment of Japan in the game along with some eye candy food treats as the theme. If you like some Japanese food delights in your casino gaming then you also must try the Sushi Booshi Mushi slot.

This game is based on the preparation of food, and it depends on the highest food that a person can make in a single slot. The pay here is impressive, and it is a bit different and exotic from the otherwise standard game available in slots. 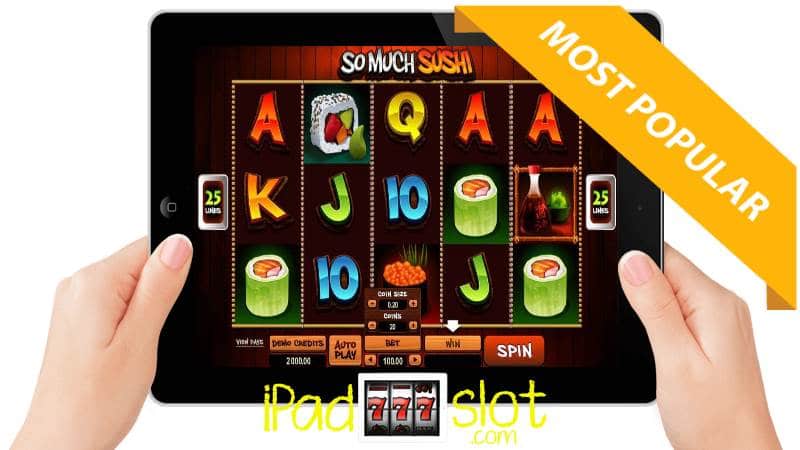 ** The So Much Sushi Microgaming slots game might be available to play for free fun or real cash on your iPad, iPhone, Android, Windows device, PC or Mac. Just take a look at our online casino guides here. **

There are some slot plays, which are focused on the wars and fantasies such as lotuses, frogs or heroines, etc. But this slot game is entirely different and exciting to be a part of.

Base game symbols and paytables

This is a above average Microgaming iPad slot game that can be played for free or real money. Not just the reel symbols, but some of the scatter symbols in the game can also help you earn a maximum of up to 64,000 coins in in just one spin. We rate this game a 7.5 from 10 points in our score sheet.

Quick Hit Ultra Pays Sun Dragon Free Slot App For players who have been in the business for quite some time now, the mere mention of ‘Quick Hit’ will mean one thing to most casino players i.e. Bally. The Ba...
Shogun of Time Microgaming Slot Game Review Shogun of Time Slot Game Review Shogun for Time is game which comes from the Microgaming company. This slot machine comes with a Japanese fighter theme. Pla...
Aristocrat New Year’s Treasure Free Slots Game New Year’s Treasure is an Chinese themed free slot game which comes from the Aristocrat stable. This game does pay homage to the colourful Asian New Year celebr...
Dragon Emperor Free Play Aristocrat Slots Guide Are you ready to embark an exclusive gaming adventure by exploring the hidden treasures of the mysterious Dragon Emperor? Well, if yes, then the Aristocrat "Dra...
The Amazing Big Top Gold Free Slot Game Review This carnival themed free iPad slot game from Aristocrat Gaming takes one to a carnival for some gaming excitement under the big top. Inside the carnival, playe...
Wolf Gold Slots by Pragmatic Play Review Wolf Gold is a 5 reel, 25 paylines video slot from Pragmatic Play who have released quite a number of quality games for online casino players. In essence, it in...
Crazy Cows iPad Slot Game Free Preview The barnyard is full of action and players will be sure to collect some great payouts from Crazy Cows by Play’n Go. This iPad slot game is super exciting and wa...
Big Red 2 Free Slots Game Review Classic slots are a favourite of most gamers and in this slot, Aristocrat Gaming fuses elements of classic slots and also elements of modern video slots in brin...
Money Heat by Ainsworth Free & Real Play Gu... One more amazing creation from the developers at Ainsworth is a 5-reel iPad and iPhone slot game with 30 pay lines. Apart from providing profitable wins, the ga...
Sumatran Storm Slots Game Guide This is one of many IGT’s animal-themed slots. Sumatra is an island found near Indonesia where one can find a lot of tigers and other wild animals. The objectiv...
Captain Quid’s Treasure Quest IGT iPad Pokies Fr... Are you ready to encounter a pirate ship and through it take some treasures home? You can do this in IGT’s Captain Quid’s Treasure Quest iPad free slot. This is...
Caribbean Kitty by IGT Slots Game Guide Caribbean Kitty is an animal themed slot game from IGT. This progressive slot game primarily focuses on cats, therefore, when spinning the reels of this slot, p...
African Dusk Mr. Cashman Free Slots Guide African Dusk Mr Cashman is an African themed game focusing primarily on African wildlife. This is an Aristocrat powered video slot game which comes with five re...
Amazons Diamonds Novomatic Free Slot Game Guide Amazons Diamonds is an above average Novomatic powered slot game which comes with a western theme and a good balance of bonus and free spins features. AMAZONS ...
Glitter Gems by Ainsworth Free & Real Play ... Glitter Gems exciting iPad compatible slot machine game by Ainsworth gaming, it's a spectacular example of how to engage players in a eye candy theme which Ains...
The Voice Free IGT Online Slot Game Guide The Voice is one of IGT’s best branded slot games to hit the casino floor in land casinos as well as at online sites. The game is based on the popular music tal...
African Simba Free Novomatic Slot Game Guide Africa is a beautiful continent that’s blessed with a lot of thick forests, stunning mountains, vast stretches of plains, magnificent waterfalls and above all, ...
Valkyrie Fire Barcrest Free App Review Valkyrie is a Norse mythology themed iPad and iPhone compatible slot which comes from the SG Interactive stable of Barcrest games. This slot has a special focus...
Free 50 Dragons iPad & iPhone Pokies Game 50 Dragons is one of the most popular genres of online slot games that truly focuses on the mysterious east. This online slot game is developed by Aristocrat an...
Miss White Free Slots Game Review IGT in this game rekindles the tale of Snow White, one of the most popular legends to have ever been told. Miss White slot game emulates the earliest Snow White...
Tags: Asian themed slots, Microgaming android free pokies, Microgaming android free slot, Microgaming free app, Microgaming free iPad pokies, Microgaming free iPad slots, Microgaming iPhone free pokies, Microgaming iPhone free slot, So Much Sushi Slots,