Most of the time when an animated sitcom is released, its meant for the younger generation. However, this is the exact opposite of the South Park TV show. South Park is an animated sitcom developed mainly to cater for the older generation as it lays bare the intricacies and often protected information about popular politicians as well as other celebrities. If you don’t like TV shows that follow the norm and ones that say many things of the rude and crude nature then South Park is not for you.

Realizing just how popular the cartoon sitcom is with the older’ish generation, Net Entertainment decided to come up with a branded South Park slot game which they named South Park Touch slot. To learn more about this slot, continue reading this review. However, before we jump into the full details, just remember that this slot comes with five reels and 25 paylines of pure fun and South Park humor that we all know and love. If you like this slot you should also try the Family Guy game. 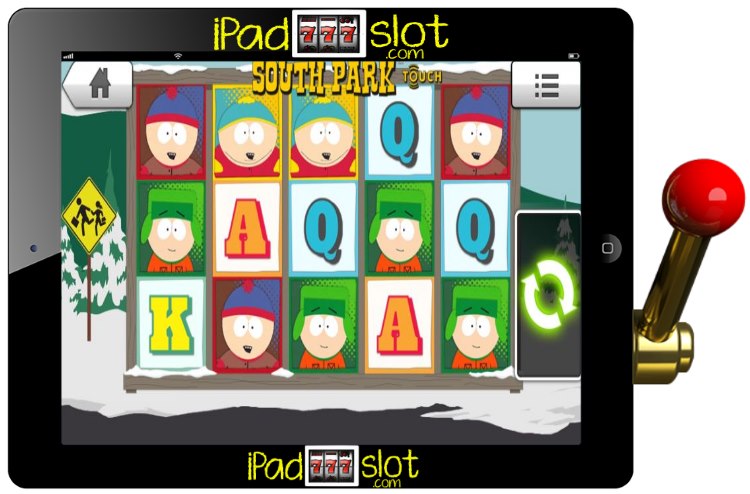 The background of this slot game depicts an animated sidewalk themed from the TV show nicely. The reel section is covered by a brown colour.

About South Park the Show

This animated series is not for the little ones that’s for sure. Just so you know its main purpose in life is to offend as many people as possible as it portrays the adventures and lives of the main characters of Stan, Kyle, Kenny and Cartman who live in a Colorado town.

The show has taken the piss out of the likes of Saddam Hussein, Osama bin Laden, politicians like Donald Trump, Sarah Palin and many famous people like Michael Jackson, Tom Cruise, Justin Bieber, Lorde, Ben Affleck, Bono,Britney Spears, Paris Hilton, Will Smith, Oprah, John Travolta and even Jesus himself has been featured on the show, but not in a good way ?.

South Park the show has been running since the year of 1997 and was created by Trey Parker and Matt Stone. It’s rated for mature audiences and adult themes.

South Park Touch is a pretty simple iPad, iPhone and Android slot to understand and play, but it’s a very entertaining slot game overall. This slot gets an 8.5 point rating out of 10 points in our NETENT iPad, Android and iPhone slot game guides.

** Great news for you! the South Park slot machine game that we have reviewed right above is available to play for free on your iPad, iPhone, Android, Windows device with or without an app install, or play free on your PC or Mac. Just take a peek at our FREE games page here. **

Desert Spirit IGT Free Slot Game Guide Desert Spirit from IGT is a slot game that takes you to the Southwest, players get up close with native Americans on the reels. Fast Start Desert Spirit IGT Fr...
Ellen DeGeneres Show Have a Little Fun Today Fre... After acquiring the exclusive rights to develop Ellen DeGeneres branded slots, IGT moved fast to develop as many Ellen themed slots as possible and this is one ...
Mild Rockers Lightning Box Free Slot Game Guide Mild Rockers is an iPad compatible slot which comes from the Lightning Box stable. This game comes with a clubbing theme meaning that as players spin the reels,...
Secrets of Stonehenge Free IGT Slot App Many folklore books are full of stories and legends about mysterious creatures and societies of the past. While its great to learn about the past legends from b...
American Dad! Free Online Slot Game Guide The American Dad! TV show has been nicely themed into this free slot game from Playtech. This 40-payline and 5 x 3 reeled branded game is going to keep you smil...
Free Play Wolf Run Hot Roulette Slots by IGT Wolf Run Hot Roulette is an animal themed iPad slot game. Specifically speaking, this is a wolf themed game as its primary focus is on wolves. Players of IGT sl...
Heidi’s Bier Haus WMS Free Slot App Heidi’s Bier Haus is German and when translated to English it means the house of beer. As such, from the title of this online slot machine players can get an id...
Dragon’s Temple Free Slots by IGT The culture of the Orient is full of dragons and so is the casino floor chocked with dragon genre games. This game is based on dragons in a big and exciting way...
Crystal Slipper Free Slots Game Review This is a fairy tale themed slot game from IGT. This slot is one of those slots from IGT that comes with a storyline. The story centres on Cinderella, her story...
Aristocrat Mighty Cash Safari Free Pokies Game Mighty Cash Cash Safari comes from the Aristocrat stable. This online slot machine falls under the Mighty Cash series widely known for rolling out top quality p...
Jewel of the Arts IGT Slots Game Guide Jewel of the Arts is a Japanese slot game developed by world renowned game developer IGT. The primary focus of this game is exploring the artistic side of Japan...
Gold Coin by IGT Free Slots Game Guide Gold Coin slot game is a great addition for players from IGT. This is a retro-themed slot game which mixes features from past slot games and features from moder...
Pharaoh’s Fortune Slots by IGT Free Play Guide Pharaoh’s Fortune is one of IGT’s premier classic casino games based on the ancient Egyptian culture, and history of the country featuring the times of sphinx a...
Fire Wolf II Free AGS Slot Game Guide The AGS powered Fire Wolf II is a sequel to the highly popular Fire Wolf slot. Just like its predecessor, this game can be described as an awesome release. If y...
Mystic Moon Big Hit Bonanza Ainsworth iOS Free S... Mystic Moon Big Hit Bonanza is a magic-themed slot game that comes from the Ainsworth company who make all the must play pokies (slot) machines. As players spin...
Big Catch Novomatic Slots Game Preview Big Catch is a nautically themed iPad slot game app which comes from the Novomatic company. In this game, players can expect to encounter different species of a...
Top Spot Barcrest Slots Free App Top Spot is an XOX themed iPad slot game developed by SG Interactive and it's from the Barcrest pokies studio. This online slot machine app does not differ much...
Big Red 2 Free Slots Game Review Classic slots are a favourite of most gamers and in this slot, Aristocrat Gaming fuses elements of classic slots and also elements of modern video slots in brin...
Shooting Stars Online Slot Review Shooting Stars Online Slot Game Review The title of this slot will have you thinking about everything cosmic and celestial but alas, there is nothing like that...
Jewels of India Free High 5 Games Slot Guide The land that lies between the Arabian Sea and the Bay of Bengal is home to vast riches as well as fertile lands. That land, of course, is modern-day India. So ...
Tags: Best NETENT slots, NETENT Android slots, NETENT android slots free, NETENT free pokies, NETENT iOS free slot app, NETENT ipad pokies free, NETENT iPad slot, NETENT iphone pokies free, NETENT iphone slot free, NETENT pokies, NETENT pokies app free, NETENT slot app, NETENT slot app free, NETENT social pokies, NETENT social slots. NETENT android pokies free, South Park, South Park slot app,