Sushi Cuties by Booming Games is a fun iPad slot machine game, which offers a great payout spread over beautiful and appealing characters. The game contains 30 payout lines, with a unique 7 reels setup.

The slot layout of the games is based on a popular food dish of Japan, aka Sushi. The developers have ensured to make this Japanese cuisine look extremely appealing with an amazing theme and background music that’s pretty cool also.

Sushi Cuties contains a great collection of reel symbols, where all of them are based on the famous Japanese culinary characters, with Sushi leading the way in the graphics theme.
** Sushi Cuties by Booming Games app and / or similar slot games may be available to play on your iPad, iPhone, Android, Windows device, PC or Mac. Just take a peek at our FREE GAMES PAGE HERE. ** 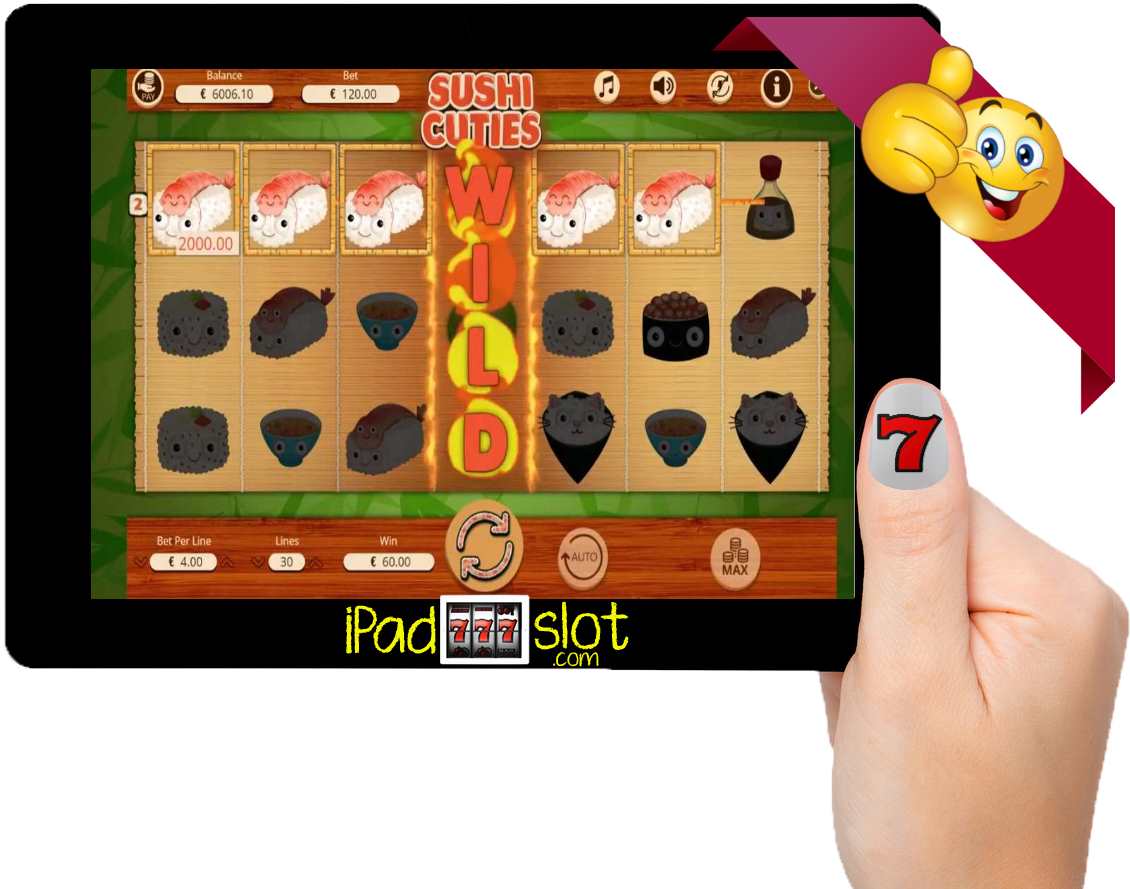 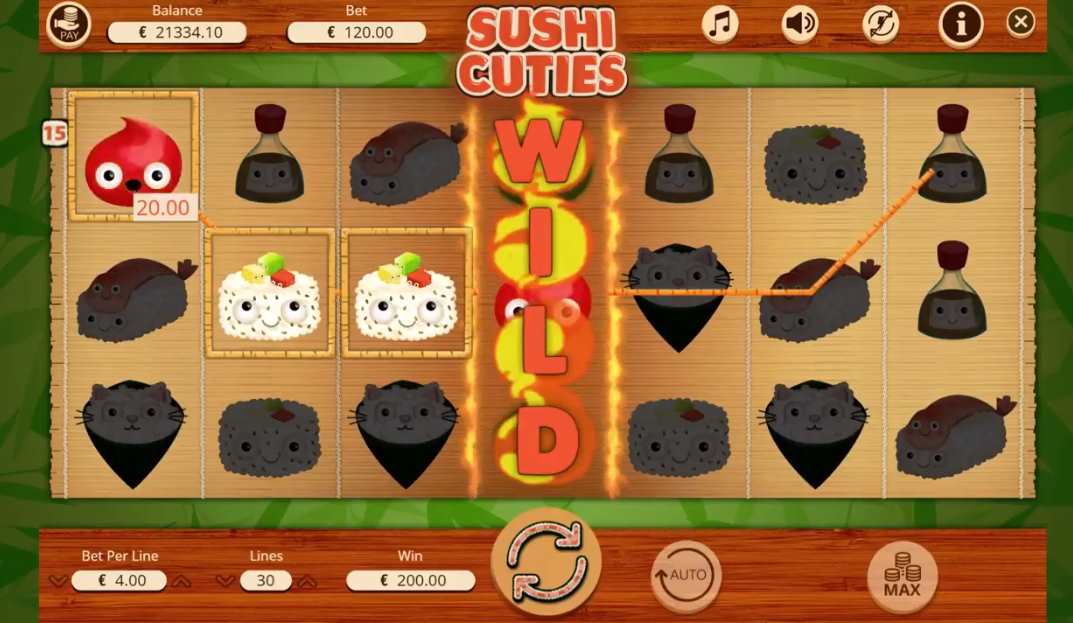 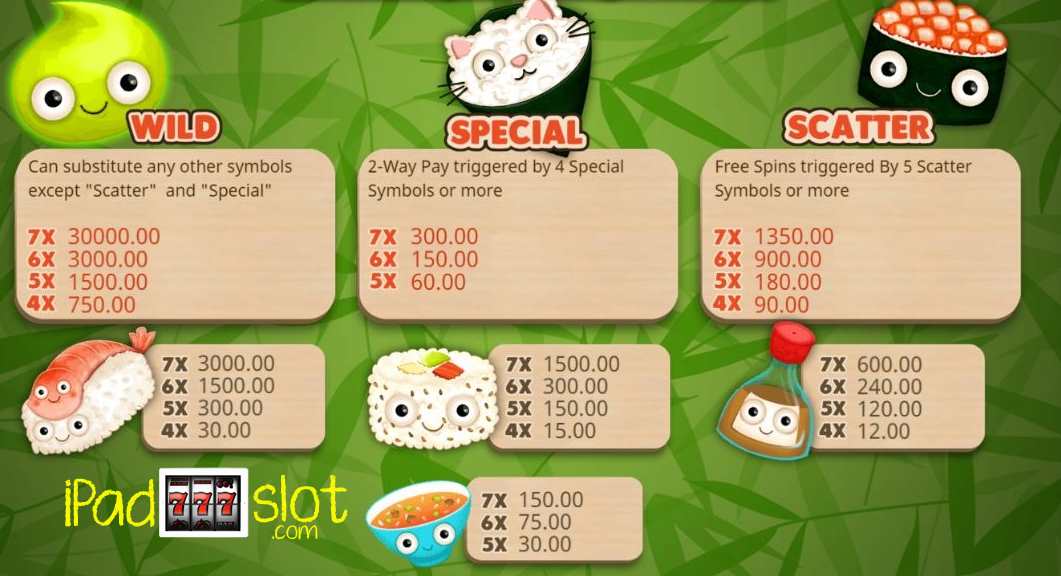 Sushi Cuties is yet another slot machine game app from Booming Games which has targeted players with a Far East genre in this release. The theme as well as every other gaming aspect are relative to that of the the Japanese culture. This game gets a rating of 5.8 in our review, it’s just ok overall and personally we have many better games to play on our site.

Big Catch Novomatic Slots Game Preview Big Catch is a nautically themed iPad slot game app which comes from the Novomatic company. In this game, players can expect to encounter different species of a...
Michael Jackson King of Pop Bally Free Slot Game... This is a branded slot game created by Bally Technologies which relives the life of the great music icon aka, Michael Jackson. Expect to hear the most popular M...
Champion of the Track iPad Slots Review Champion of the Track is a stunning iPad game from Net Entertainment. The game offers 30 paylines and can be played for great bet amounts that range from bets o...
Bally Ra & the Scarab Temple Free Slot Guid... The ancient Egyptian theme has been used by game developers for decades now. Due to the high number of ancient Egyptian themed slot games released each year, on...
Portomaso Gaming Sushi Booshi Mushi Free Slots R... Sushi Booshi Mushi, no it is not a Japanese recipe if that's what you are thinking and it's a mouthful of a game name that's for sure. Instead this is a recipe ...
GameArt Guardian Lion Slots Review With rows of 3, reels of 5 and pay lines of 10 in total, this game is worth playing for all iPad slot casino lovers. The pay lines are fixed, and it cannot be c...
Weird, Wicked & Wild Free Play Pokies Guide Weird, Wicked and Wild is a free online pokies machine which comes from the Aristocrat company. The title of this online slot does by all means gives the player...
Jade Tiger Ainsworth Free Slots App Jade Tiger is an Asian themed slot game with a particular focus on Asian animals including the tiger. When spinning the five reels of this Ainsworth powered slo...
Soul Queen Quad Shot Free Play Guide Love is in the air in this Ainsworth powered iPad slot game. Soul Queen Quad Shot comes with a romance theme. It's not just the stunning symbols on the reels th...
Magic Flower Deluxe Free Aristocrat Pokies Game Magic Flower Deluxe is a online slot machine from the Aristocrat company. This game comes with an oriental theme of an Asian village setting. The Magic Flowe...
Samba De Frutas Free Play iPad Slots Samba De Frutas is one of the popular IGT creations. This game provides a wonderful theme, which sports the South American culture of Samba Dance, and the chara...
Phoenix Princess GameArt Free Slots Review The Asian themed Phoenix Princess is an engaging iPad slot from GameArt. The 5 reels and 20 pay lines game has a layout that helps in playing the bonus feature ...
Yokozuna Clash Free Slot Review The Yokozuna Clash Slot is set to be the ultimate battle of sumo wrestlers on the reels, with the lucrative chance of winning some handsome rewards. It is set i...
Kawaii Dragons by Booming Games Guide Kawaii Dragons is a 5-reel and 25 payout line supported fun slot machine game, which assures to show dragons in the most beautiful light. Developed by Booming G...
Roman Tribune Konami Free Slots App Guide Roman Tribune is an ancient Rome themed iPad slot game by Konami. The main focus of this game is on the tribunes, this special group that’s was tasked with over...
Western Belles by IGT Free Slots Game Guide IGT gaming technology introduces the players with Western Belles. This is a cowboy-themed iPad slot game, which is backed with a brilliant background graphics a...
NextGen Tianlong Slots Game Review The Dragon is a sacred symbol in the oriental way of culture because it is thought to be lucky for the people. This iPad slot machine has been developed jointly...
World of Ripley’s Believe It or Not Free Slot Ga... World of Ripley’s Believe It or Not is a Spin Games release. This is a branded slot game which is based on the highly popular Ripley’s Believe It or Not televis...
Konani Free Slots App Lotus Land Review Lotus Land is an oriental themed slot game developed by world-renowned Japanese game developer Konami. The primary focus of this slot is on animals that are wid...
Spartacus Call to Arms Williams Slot Free App For players who have played Spartacus: Gladiator of Rome, you will realise that there are many similarities between that game and Spartacus Call to Arms; this i...
Tags: Booming Games iPad slot, Booming Games slot app, Sushi Cuties slot,