Thai Sunrise by NextGen Gaming is a virtual journey to Thailand and allows the players to witness some of the most regular scenes to be found in a Thai city like temples, lotus flowers, tuk tuks and pretty Thai girls who are the ones that pay-out the most.

This iPad compatible slot game comprises 5 reels and spans for 25 paylines. The Thai Sunrise pokie comes up with an attractive game setup chocked full of colour and all things Thailand. However, the theme may not completely convince to that of what’s observed in Thailand, nevertheless, for the sake of slot machine games this is pretty good overall in all aspects. 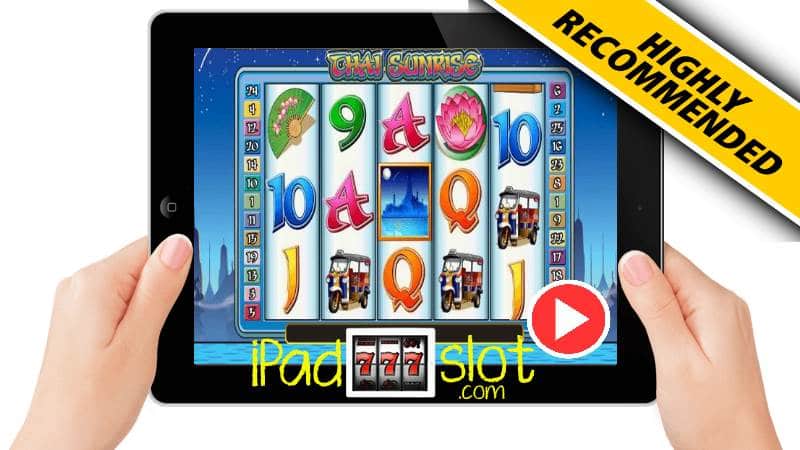 ** The Thai Sunrise NextGen slots game might be available to play for free fun or real cash on your iPad, iPhone, Android, Windows device, PC or Mac. Just take a look at our online casino guides here. ** 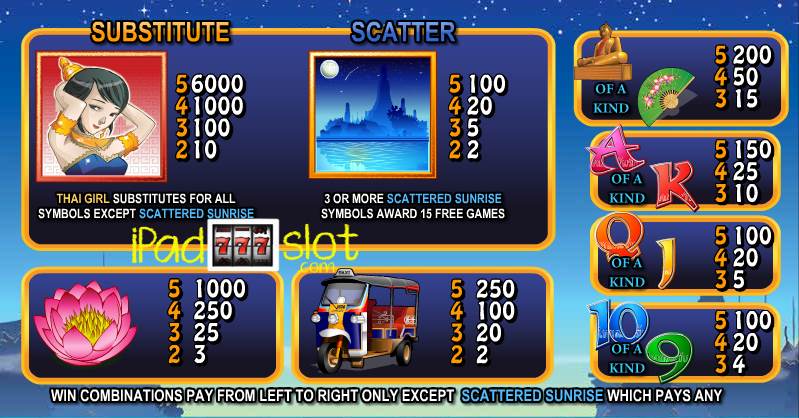 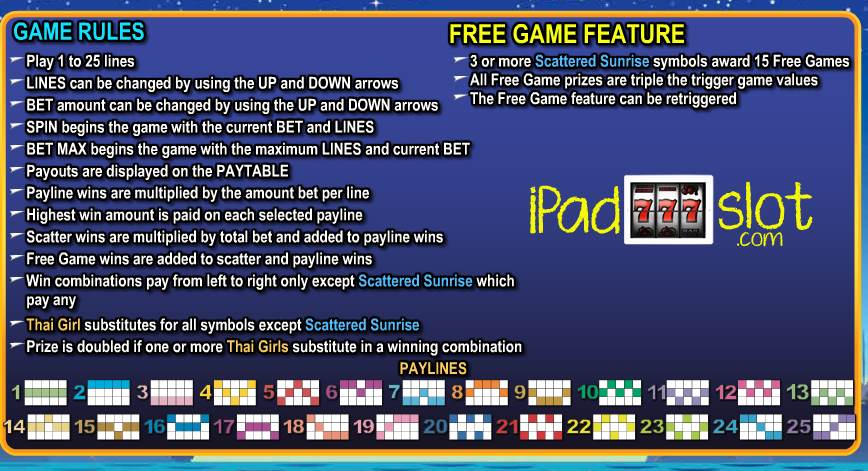 Thai Sunrise by NextGen Gaming is a fun slot machine game based on Thailand. The game particularly focuses on the culture and characters generally found in Thailand, and the developers have done a fair job in keeping up the Siam theme. We give this iPad slot a solid 8.4 from 10 in our score card.

Very Fruity Williams Free Slots App Guide The title of this iPad slot game is enough to give players a clue as to what to expect when spinning the reels of this game. Indeed, you are going to come acros...
The BullFighter Free Slots Game Guide Spain is one of the most popular country's where bullfighting is legal. However, most other countries across the globe have either explicitly or implicitly bann...
Best Free and Real Money Play Roulette Casino Ap... Think about a game of excitement, fun and possible wins, well let’s think about roulette for a bit. Though filled with excitement, the game of roulette can be b...
Play Double Diamond Slots Free Guide Double Diamond from IGT is one of the popular takes on the classic 777 style of slots. This game gets 3 reels and 1 line for the players to get across many rewa...
Lucky Angler a Snowy Catch iPad Slots Review Lucky Angler a Snowy Catch is a great slot to enjoy on your iPad or iPhone and the game is based on an ice fishing journey. Get ready to break the ice and reel ...
Wings of the Phoenix Konami Pokies Game App Wings of the Phoenix is an online slot game developed by Konami whose main focus in this pokie app is on the legendary creature i.e. the Phoenix. The Phoenix is...
Golden Dollars Free Ainsworth Slots Guide While playing at online casinos is always a fun adventure, sometimes we all remember the good old days when we would take turns to spin a mechanical slot machin...
Cash Wizard Bally Slots App Free Play Guide This is another game developed by the famous Bally Technologies. The game has a simple interface and it's a great Bally free slot app for your iOS device. It ha...
Deco Diamonds Slot Game Guide Deco Diamonds Slot Game Review Deco Diamonds is a game which comes from Microgaming. As can be deduced from the title, this slot comes with a diamond theme hen...
Cai Yuan Guang Jin Free Slot Game Guide The Chinese New Year is the most anticipated holiday in China. All year round communities and families are much consumed with their New Year preparations and wh...
Silent Movie Slots by IGT Game Guide Silent Movie is the ultimate old-fashioned iPad slot theme themed on the classic movie era from the early 19th century period. This game is a fairly popular rel...
Xing Guardian NextGen Free Slots App The Xing Guardian iPad compatible slot game brings to life the exotic fables and mythology of Far Eastern cultures and life. NextGen, the developers of this gam...
So Much Sushi Slots by Microgaming Guide With reels of 5, rows of 3 and paylines of 25, So Much Sushi is a Japanese game that depicts food habits and culture of the people of Japan. It is developed by ...
5 Elements Slots Game Guide The 5 Elements slot brings all the 5 elements of fun, pleasure, money, fortune, and luck to you. This slot is from GameArt and brings the age-old symbols of Asi...
Imperial Wealth Slots App by Konami Guide Imperial Wealth is an oriental themed slot game from Konami which celebrates Chinese traditions, power and strength. For players to start playing Imperial Wealt...
Fortunes of Atlantis Aristocrat Free Mobile Poki... Fortunes of Atlantis is an free mobile pokies app game by Aristocrat that is inspired by the sunken city of Atlantis. This mythical civilization & its cultu...
Wild Panda Free Aristocrat Pokies app The great and fun-loving Panda is viewed as a symbol of good luck in China and Asia. To the whole world; it is a gentle furry creature that needs to be treasure...
2Can Free Aristocrat Slots Game 2Can Free Aristocrat Slot Review Embark on a journey through the exotic jungle forests on the reels and unlock the hidden treasure bonuses Aristocrat has creat...
Play Free IGT Hot Roll Super Times Pay Slots The Hot Roll Super Times Pay iPad slot is a game which has been redesigned from its previous version by IGT. The game features a classic slot theme structure to...
Firehouse Hounds IGT Pokies Machine Free Play Re... Firehouse Hounds is an innovative iPad slot machine designed and powered by IGT. It is one among most popular titles from this developer and continues to garner...
Tags: Asian themed slots, NextGen free app, NextGen free iPad pokies, NextGen free iPad slots, Thai Sunrise slots,