This carnival themed free iPad slot game from Aristocrat Gaming takes one to a carnival for some gaming excitement under the big top. Inside the carnival, players can get to see all the common features that one is likely to see when visiting a carnival event.

The only common feature that players will not find at this particular carnival is the scary section as this game is all about the fun and friendly carnival features. To start one’s adventure playing this slot game, all that a player needs to do is to set in motion the slot’s five reels that come with twenty paylines. 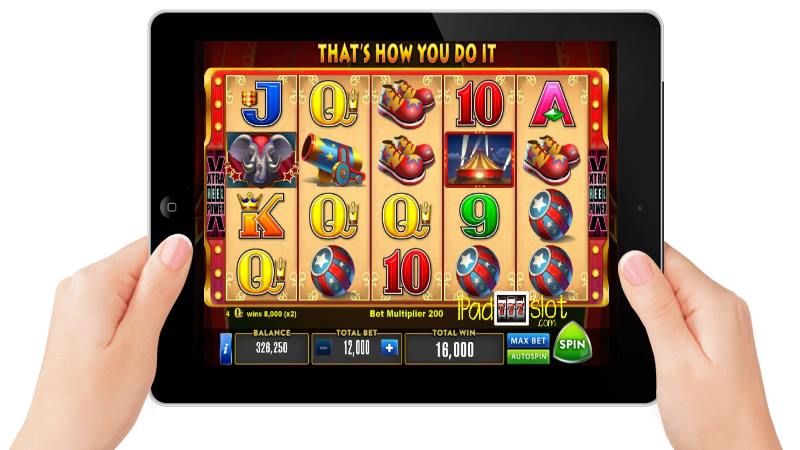 The background of The Amazing Big Top Gold showcases the entrance to a carnival room. The entrance is covered by a big red curtain that slightly opened so players can see from the outside whats inside. The reels of the game are covered by a brown colour that has some gold decorations at the top and at the bottom.

On the reels, players are going to find the following symbols: a canon, a magician’s hat, a pair of boots, a huge coloured ball, an elephant and an entry ticket. To complement these icons, there are also other low-value icons represented by traditional card symbols.

The Amazing Big Top Gold game is an entertaining free iPad slot that’s easy to understand and play. This gets out of a 10 point rating a 6.0 points score overall in our review and game guide. Not seen this game in a land casino before but i have played it for free at the Heart of Vegas casino on facebook.

How to Choose a Great Mobile Slots & Games ... There is no doubt that online gambling is booming even among slots players who like land casino gaming. Online casino software developers and casinos are always...
Candy Bars IGT Slots Free Game Guide As one can deduce from the slot’s title, this IGT powered game is all about candy. The game’s background, the symbols on the reels and even the background sound...
Aristocrat Portal Fortunes Aztec Relics Free Slo... Portal Fortunes Aztec Relics is an Aristocrat powered online slot machine that comes with an Aztec theme. Players who love Aztec  themed games will enjoy this a...
Gold Stacks Golden Seas Free Aristocrat Pokies Gold Stacks Golden Seas is an jackpot online slot machine which comes from the Aristocrat company. This free game comes with an ancient royal theme. Gold Stack...
Arctic Valor Free Microgaming Slot Arctic Valor is an game which comes from the Microgaming company. This online slot comes with a fairy theme which is blended with an arctic vibe. Quick Start A...
Mystic Moon Big Hit Bonanza Ainsworth iOS Free S... Mystic Moon Big Hit Bonanza is a magic-themed slot game that comes from the Ainsworth company who make all the must play pokies (slot) machines. As players spin...
1421 Voyages of Zheng He Free IGT Slot Game Guid... The number eight is commonly considered to be lucky in the Chinese culture, so that’s why it’s referenced multiple times inside the game. Anyways, here are some...
Weird, Wicked & Wild Free Play Pokies Guide Weird, Wicked and Wild is a free online pokies machine which comes from the Aristocrat company. The title of this online slot does by all means gives the player...
Cluedo Who Won it? iPad Slots Free Play Guide Cluedo – Who won it? slot machine from IGT is an interactive suspense and crime themed game that is a cracker. It is based on a popular board game that goes by ...
Cash Spin Free Bally Slots App Game Guide Cash Spin Slots made by Bally is one of the most simple slot games out there, so make sure you grab the free Bally iOS or Android slot app and get playing. Ther...
NETENT Aloha Cluster Pays Free Slots Game Guide Aloha Cluster Pays is powered by Net Entertainment, a leading entity in the online gaming industry. This online slot machine comes with a tropical theme that is...
Tigress By Aristocrat Free Game Play Guide This wonderful slot game takes the players into the heart of South East Asian jungle where you will discover the ferocious wild beast the royal creature tigress...
Novomatic 13 Slot Game Guide & Free Play Op... 13 is a mystery-themed online slot machine powered by Novomatic. When playing the game, players will realize that the number ‘13’ is inscribed on a brown door a...
Aristocrat Fortune Fleet Free Slot Guide Voyages of discovery are always a great proposition for adventurers, when on voyages of discovery they will get to forget about the world they live in for some ...
The Lost Temple Slots by Zeus Play Guide This iPad and iPhone compatible slot called The Lost Temple, takes you towards the hills of Tibet where the monks are waiting for you. If you are successful in ...
Cleopatra IGT Slots Free Play & Review The Cleopatra slot is a brilliant game from IGT and since its release over 25 years ago the game has drawn millions of attention a played in over thousands of c...
Book of Oz Slot Game Guide Book of Oz Slot Game Review Book of Oz is an 10 payline online slot machine which comes from Microgaming. For those who are into fairytale books or movies, odd...
Super Sevens IGT Free Slot Game Guide Super Sevens is a classic online slot machine from IGT which is a bit unique from other classic titles. This is yet another great "sevens" themed game from IGT ...
The Lovely Outlaws Free High 5 Games Slot Game The Lovely Outlaws is a High 5 Games powered slot that comes with a wild west theme. Normally, wild west themes feature male characters but that’s not the case ...
Pearl River Ainsworth Slot Game App Review Pearl River is an aquatic-themed slot game from the Ainsworth stable of super pokies. This slot has a number of elements that make it appealing. First of all, i...
Tags: Aristocrat free iPad pokies, Aristocrat free iPad slots, Aristocrat Free Slot App Article Tags, The Amazing Big Top Gold Free Slots,