The Great Winaldo is a iPad slot game inspired by the world of magicians and illusionists. Created by IGT you are assured of some fun either online for free or for real money at your local land casino if you seek out this slot machine.

When you load the game but before you start spinning the reels, the background will be covered by circus style decorations. However, after the screen with the reels load, you will see a background that’s covered by a solid red colour.

The reels of the game are covered by a bluish colour that changes from time to time depending on the symbols covering a certain position on the reel. 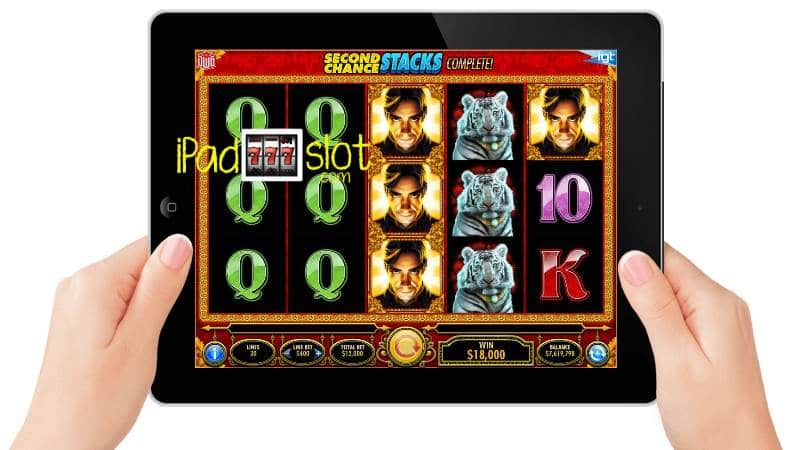 Symbols on the reels include a magician, a female assistant to the magician, a Siberian Snow tiger, a magician’s hat and a pair of doves. There are also traditional card symbols consisting of number 10, an Ace, Jack, Queen and King. 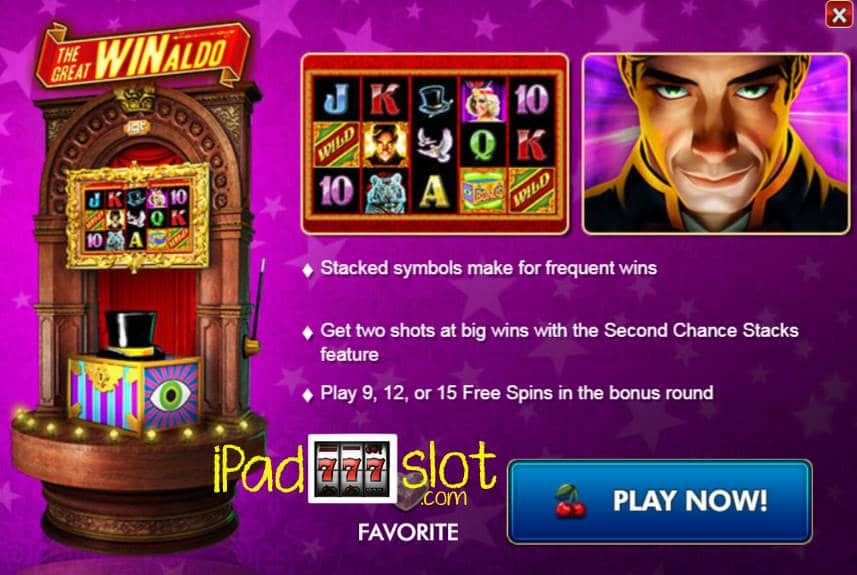 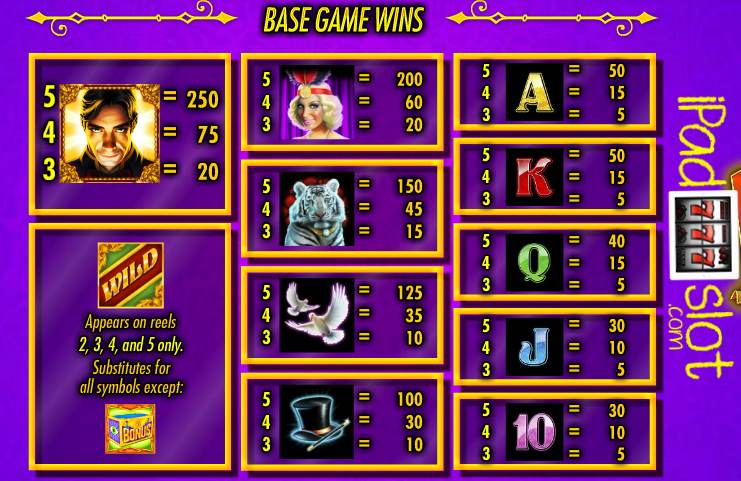 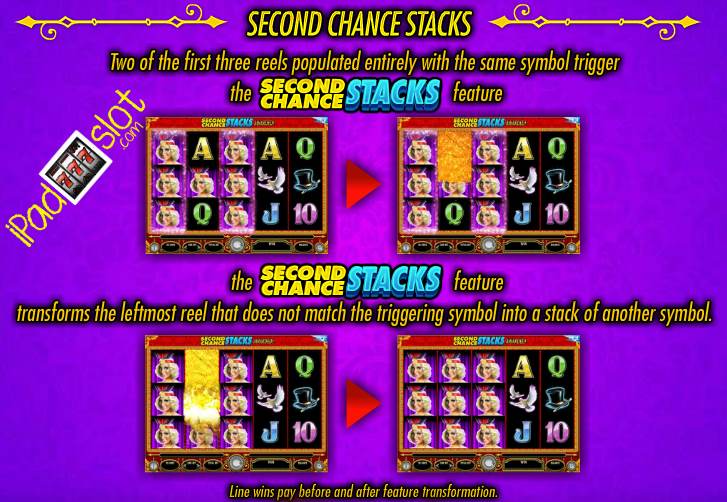 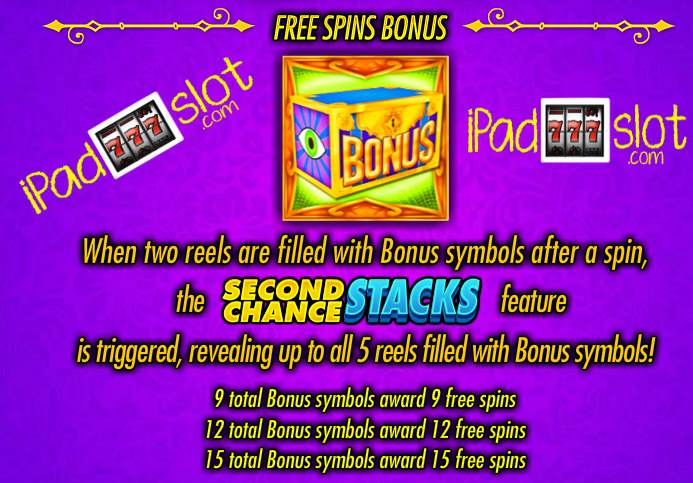 The Great Winaldo iPad casino slot game does not have high payouts during the base game but once you activate the bonus features, you will be able to enjoy entertaining bonus games that come with some excellent rewards. This game gets a 7.5 point rating out of 10 points in our Great Winaldo review.

WEST JOURNEY TREASURE HUNT FREE SLOT GUIDE Powered by Vault and developed by High-5 Games, West Journey Treasure Hunt is a 5-reel slot game with 40 bet ways to win. WEST JOURNEY TREASURE HUNT SLOT GUIDE...
Ainsworth Action Dragons Slot Review & Free... The Action Dragons game is the appealing Ainsworth social free iPad slot that is currently being offered at the Players Paradise Casino. The game features a mys...
High 5 Games Princess of Paradise Free Slot Guid... Princess of Paradise is an online slot machine powered by High 5 Games. The game comes with a jungle theme and basic set of bonuses. Princess of Paradise slot ...
Action Jack Free IGT Slot Game Guide Action Jack is an adventure-themed slot game which comes from the IGT stable. In this online slot machine, players will join Jack on his voyage of discovery to ...
Red Hot Tamales IGT Slot Free Play Guide Red Hot Tamales is an online slot machine from IGT which comes with a food theme. For those who might not know, Tamales is a Mesoamerican dish made of dough in ...
IGT 777 Sizzling Hot Roll Free Slots This is a game from the good old days but it's still an entertaining slot from IGT plus it's iPad and iPhone compatible. This game is pretty simple, it doesn’t ...
Heidi’s Bier Haus WMS Free Slot App Heidi’s Bier Haus is German and when translated to English it means the house of beer. As such, from the title of this online slot machine players can get an id...
Basic Instinct Online Slots Preview Basic Instinct, a video slot game from iSoftBet, is based on the hugely popular movie and offers amazing ways to win. The game features 243 ways to win and is p...
Elephant King Slots by IGT Game Guide Elephant King is a awesome game made by IGT and is good to play on your iPad or iPhone from our casino guides. It was released in about 2017 ish' for online and...
The Love Guru Online Slots Game Guide The Love Guru is a themed video slot that is presented by iSoftBet. This game is based on a popular movie from 2008 starring Mike Myers as Guru Maurice Pitka an...
Rhino Rush Free Aristocrat Pokies Game Animal themed video slots are very common in casinos today, everyone loves Big Red and Buffalo but what makes Rhino Rush unique from other titles is the sleek d...
Bruce Lee Online Slots Game Preview Fancy a little Kung Fu with your online slots fun? Bruce Lee is one of the best themed slots that can be enjoyed at online casinos that use iSoftBet software. T...
Dragon’s Law Free Slots App by Komani Guide Dragon’s Law is an Asian themed slot game developed by Konami aimed at quenching the unending thirst of Asian genre slot games among players. This Asian themed ...
Forbidden Dragons WMS Slots Casino App Forbidden Dragons is an iPad, iPhone and Android slot game app which comes from the SG Interactive stable of terrific games. The game was originally created for...
Cayetano Gaming Asian Riches Slots Game Guide Asian Riches by Cayetano Gaming is a classic example of how modern slot machine games has risen up the popularity charts with iOS players. The game, based on As...
Lion Festival Boosted Celebration Free Konami Sl... The Lion Festival Boosted Celebration is an Asian themed slot game from the Konami stable. This online slot game pays tribute to the Lion Dance, a festival that...
Phoenix Fantasy Slots By Aristocrat Free Play Gu... The magnificent bird, Phoenix has been already portrayed in a wide variety of mythologies. Taking this into consideration, this online slot game features the ap...
Jungle Monkeys Free Ainsworth Preview Jungle Monkeys is a iPad slot game from Ainsworth gaming technology. It is a five reel video slot with 100 paylines. It comes with the 5x3 that is a standard fe...
Wild Splash Slots by Aristocrat Free Play Guide If you are an avid fan of Aristocrat iPad slot games and you're also looking to try out a simple yet elegant game, then "Wild Splash" will be an appropriate cho...
5 Dragons Pokies Free Play & Game Guide Rev... In the 5 Dragons iPad pokies game from Aristocrat you can experience the might and majesty of these mythical reptilian creatures in one slot laden with eye cand...
Tags: IGT free app, IGT free iPad pokies, IGT free iPad slots, The Great Winaldo Free Slots,