The Voice is one of IGT’s best branded slot games to hit the casino floor in land casinos as well as at online sites. The game is based on the popular music talent show seen all over the world which goes by the same name i.e. The Voice. You can play this game for free fun or real money at the most popular IGT online casinos.

The talent show brings different aspiring artists to compete against each other for the chance to land recording deals. To learn more about this uniquely themed slot game, players need to continue reading this review for all the tips to winning big on The Voice pokies machine. Just remember, this online slot machine comes with five reels and 40 paylines of IGT pokies excitement. 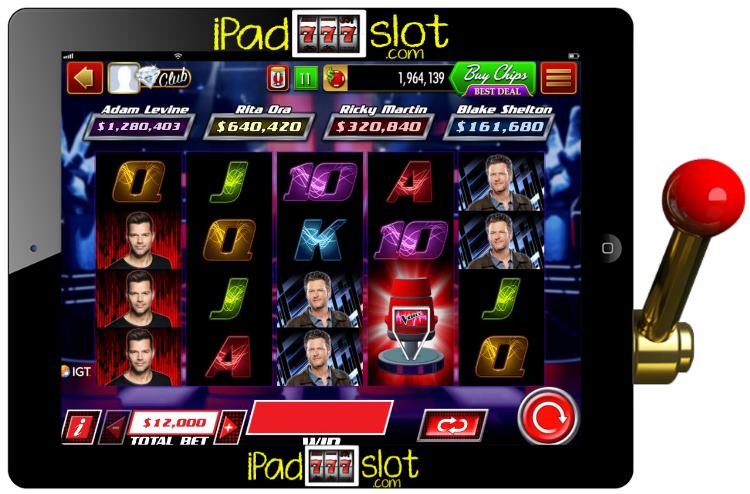 The background of this slot game depicts the inside of the arena in which The Voice (TV production) is hosted. A solid black colour covers the entire reel section so it looks like the TV show set in great detail. 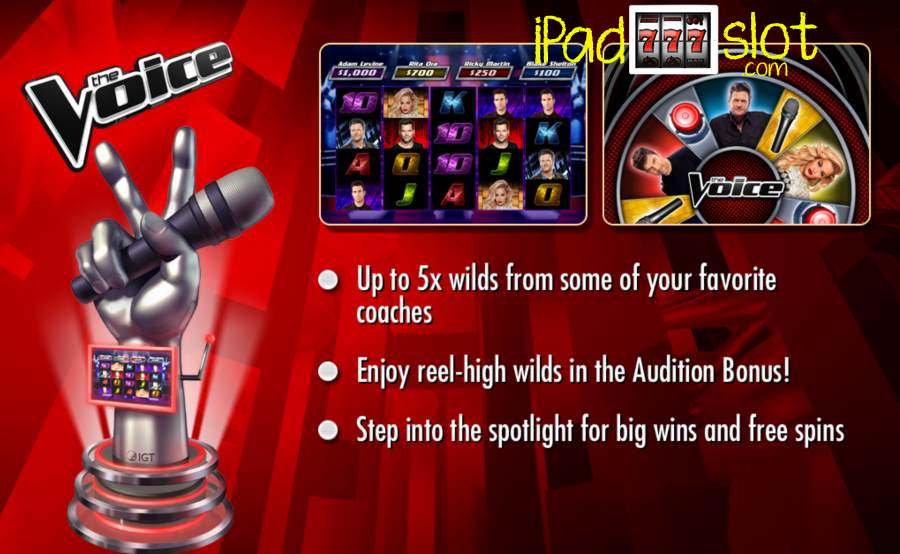 When spinning the reels of The Voice, players will encounter the following symbols on the reels: The Voice contestants and traditional poker symbols. 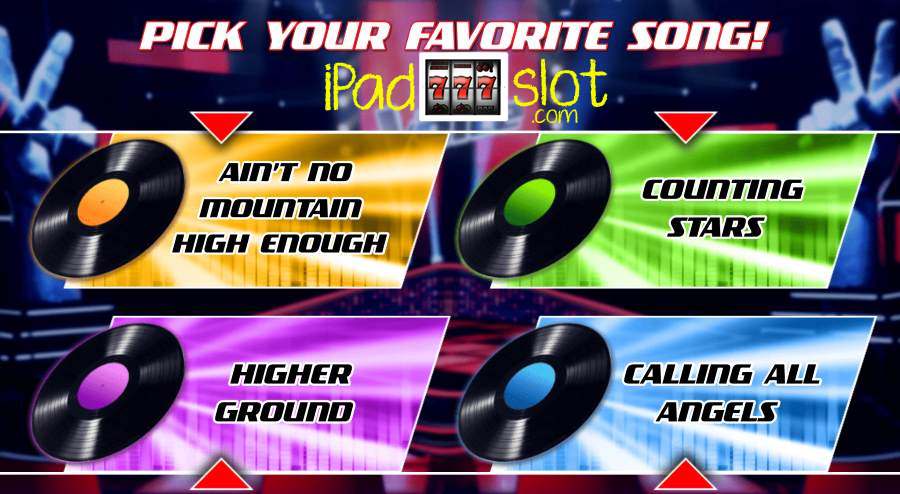 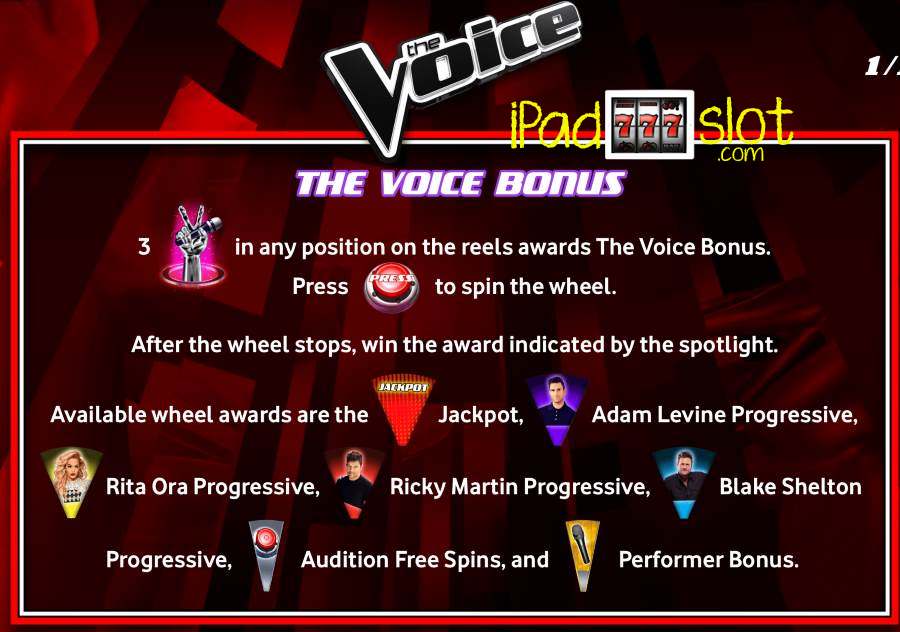 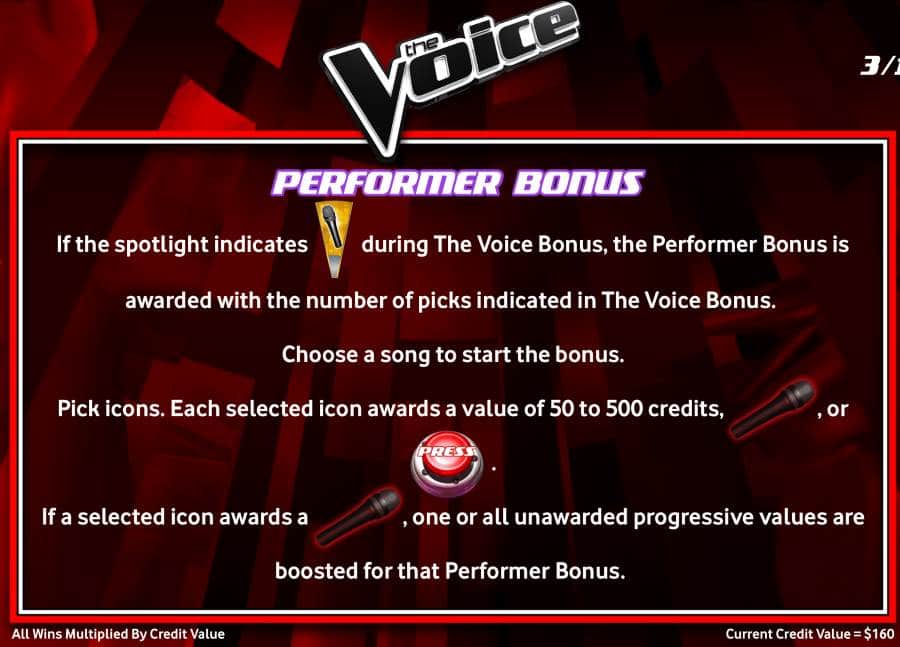 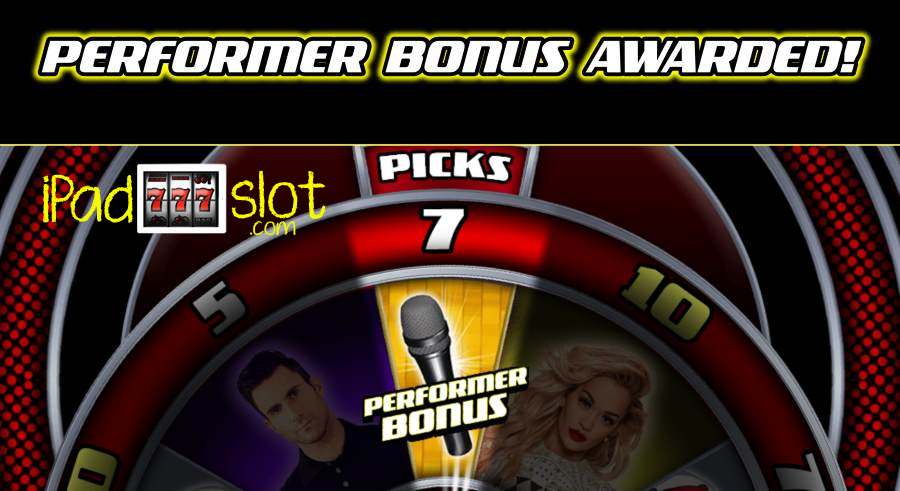 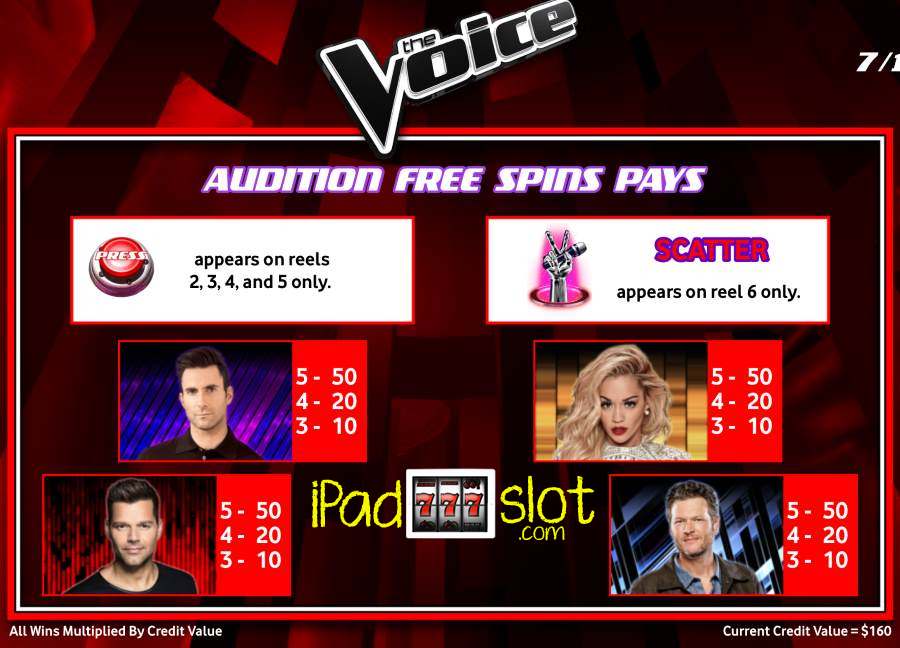 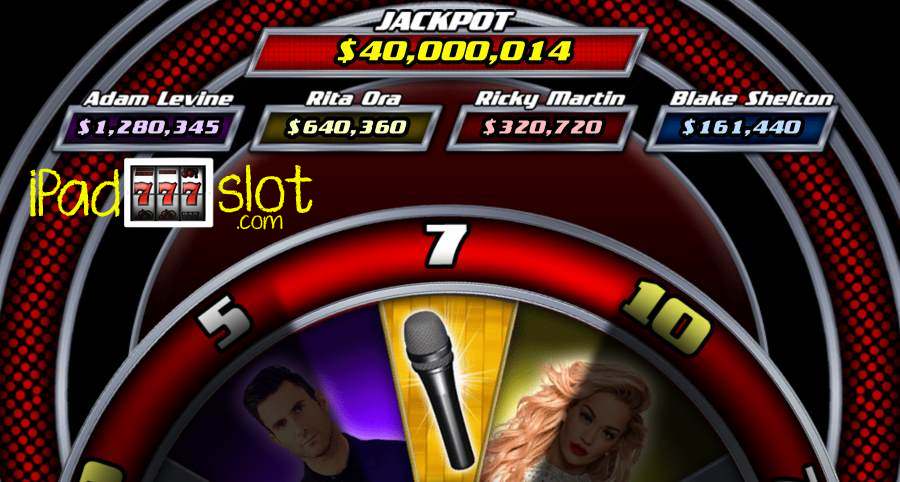 The Voice is an incredible slot game which comes with a nice assortment of bonus rounds including four highly lucrative progressive jackpots to be won. This game gets a 9.4 point rating out of 10 points so you really gotta give this IGT slot a go for free or for some real casino pay-outs.
** Just so you know The Voice IGT Slot machine game may be available to play for free on your iPad, iPhone, Android, Windows device with or without an app, or on your PC or Mac. Just take a peek at our FREE games page here. **

Huge Slots Win on The Voice Below

About The Voice TV Show

“The Voice” can be seen on TV all over the world, it’s available in more than 60 different countries who offer their own localised format of the hit talent show. It was first produced in the Netherlands in the year of 2010, well the rest is history and it’s one of the most watched TV franchise shows on the rock

The Voice can be seen in countries like Australia, Thailand, France, Brazil, China, Finland, Canada, Germany, Norway, Russia, the UK and of course the USA just to mention a few. Some countries even have a version called The Voice Kids and The Voice Senior.

The show’s general blueprint has four stages of competition: the first stage begins with the blind auditions, the second is the battle round, the third is the knockouts stage and lastly the live performances stages of the competition.

The judges on The Voice are made up of superstar figures in the music industry with the likes of Ronan Keating, Kelly Clarkson, Boy George, Seal, Keith Urban, Ricky Martin, Adam Levine, Mariah Carey and Sir Tom Jones of just a few sitting in the big red chair over the years.

How each stage of The Voice works

During the first stage of the blind auditions, the decisions from the four judges sitting in the big red seat turned backwards are based only of the voice of the competitor and not on looks. The judges hear the singers perform, but they don’t get to see them in any way.

If a judge or judges likes the artist’s voice, he or she presses a big red button and the judges chair will turn so that they can see the contestant. If more than one judge presses their button, the contestant can choose which judges they want to be with for coaching. If no judges turn their chair the competitor is on the way home.

Once the teams are selected from stage one the battle is on well and truly. Judges turned coaches will now use their skills to develop their team of musicians to the best of their ability.

During the battle stages the coaches will place two of their team members head to head to perform the same song right together in front of a full studio audience.

The coach has the brutal decision and must choose which of team will go through to the next round of competition, but the losing artist of each battle is available to be snapped up by any another coach who may want them on their team. Each coach has only two steals available during the battle stages.

At the end of the battle stages, only the best members of each team remain, and they then proceed to the knockout stages. The artists once again will be teamed up again with a team member, they find out only minutes before performing who they are going to be compared with. The musician can each choose their favourite song to sing, while their competition watches and waits for their turn. Their coach will choose the winner of each knockout and the artist not picked will be sent on their way and goodbye for the season.

In the live performance stages of The Voice, the best artists from each of the four teams will compete against each other during a live telecast. The TV viewers will cast a vote to save their most loved musicians and the two performers with the lowest amount of caste votes will be sent on their way out the door. In the end, only one musician will remain in these rounds and they will be awarded the “The Voice” trophy and a nice cash prize to boot.

Well that’s about it, as you can see the format of The Voice is very easy to understand and as such it’s one of, if not the most popular music competition shows about. Other shows in this genre are American Idol, The X Factor and the “Got Talent” series.

Crystal Slipper Free Slots Game Review This is a fairy tale themed slot game from IGT. This slot is one of those slots from IGT that comes with a storyline. The story centres on Cinderella, her story...
Free Play Guide Golden Zodiac Slots Game In your wildest dreams, what do you dream of? Whether its accumulating wealth, going on a worldwide trip or just finding happiness in your life, you can learn i...
Aristocrat Mighty Cash Outback Bucks Free Pokies... Mighty Cash Outback Bucks is an slot machine powered by Aristocrat. This game is the latest one in the ‘Mighty Cash’ slots series that is very popular both onli...
Fu Star Free Lightning Box Free Slot Game App Fu Star is an online slot machine which comes from the Lightning Box stable. This online slot game comes with an oriental theme and as such, when spinning the r...
Golden Night Bird Free Aristocrat Pokies Game Golden Night Bird is an online slot machine created by the Aristocrat company, it can be played for free fun online or at select casinos for real money exciteme...
Texas Tea Free Online Slot Game Review The title of this IGT slot game will mean different things to players from different regions. For slot players not resident in Texas or surrounding areas, the h...
Enchanted Unicorn Slots Game Guide This is a fantasy themed slot from IGT which takes you into a mythical forest that is full of unicorns, mushrooms and some lovely flowers. Your adventure in thi...
Aristocrat Buffalo Free Play Pokies Guide Buffalo is one of the most popular free iPad slots that Aristocrat Gaming has ever developed. Even though it has been around for quite some time in land casinos...
Day of the Dead by IGT Free Play Slots & Re... The "Day of the Dead Slot" game is a compelling Mexican Halloween-themed IGT social iPad slot that can be played at the Double Down Casino. The game theme perfe...
Bally Quick Hit Super Wheel Wild Red Free Play G... Quick Hit Super Wheel Wild Red comes from the Bally / SG Interactive company. The game comes with a retro theme and as such, gamers looking to play this online ...
Island Eyes Free IGT Slots Game Island Eyes is an online slot machine which comes from the IGT company. Island Eyes is an adventure-themed game that takes the player deep inside a thick forest...
Turtle Treasure Slots by Aristocrat Free Play &#... The deep blue sea is filled with wonders, starting from magnificent wildlife to the lost treasures. Thus, as a player, you will explore the beautiful coral reef...
Showdown Saloon Free Microgaming Slot Game Guide Showdown Saloon is a game from Microgaming which comes with a rather awesome theme. As such, when spinning the five reels of this slot, the player will be see r...
100 Pandas Slots by IGT Free Play 100 Pandas is the most amazing free iPad poker machine by IGT and brings you excitement and possibly bundles of cash also along the way. This game consist of 5 ...
The $100,000 Pyramid Free IGT Slot Game Guide The $100,000 Pyramid online slot machine is a game from the IGT company and was first released for land casino players in 2001. This online slot machine is a ga...
Sushi Yum Yum Free IGT Slot Game Guide Sushi Yum Yum is an online slot machine which comes from the IGT company. As one can deduce from the title, this game is food-themed and it pays homage to sushi...
White Wizard Free Play Slots Game Guide White Wizard is a aweome fantasy genre iPad compatible slot game from the Aristocrat stable. The game is inspired by the tales of witches and wizards. Though wi...
Aristocrat Wild Fortune Serengeti Stampede Slot ... Wild Fortune Serengeti Stampede is a progressive online slot that is powered by Aristocrat. The mere fact that is a progressive game makes it a great propositio...
Kitty Glitter Slots Mobile Free Play Version If you need a pleasant distraction when you are feeling a little bored, then you need to lay your hand on the five reel, 30 pay line, Kitty Glitter online slots...
Blazing Goddess Lighting Box Games Free App Guid... Blazing Goddess is an online slot machine which comes from the Lightning Box stable of awesome pokies. This online slot machine comes with a Polynesian theme as...
Tags: IGT free Android pokies, IGT free Android slot app, IGT free app, IGT free iPad pokies, IGT free iPad slots, IGT free iPhone pokies, IGT free iPhone slot app, The Voice free pokies, The Voice free slots,