This wonderful slot game takes the players into the heart of South East Asian jungle where you will discover the ferocious wild beast the royal creature tigress. The deep jungles of South East Asia still remain to be one of the most untouched and unspoiled areas of wilderness. Thus, as a player, you can take a sneak peek into this wilderness via this free iPad slot game from Aristocrat.

This slot game is basically portrayed against the theme of native wildlife and its symbols are also the perfect reminiscent of the exotic wildlife. The spectacular creatures include the red panda, an alligator, a tropical bird, and the tigress herself. Now, reveal the key game features and enjoy a smooth & seamless gaming experience.

This game rewards the players in coin denomination if they hit a winning combination. All lines are played at a line cost of 50 coins. You will need to choose your total bet prior to starting a new game. Total bet = Line Cost * Bet per Line. After placing a bet, use the Spin button to spin the reels in motion.

The fundamental game icons of this slot game is truly inspired by the wildlife of South East Asia that includes the red panda, an alligator, a tropical bird, a man, and the tigress herself.

Apart from these symbols, you will also find the bonus symbols, i.e. the wilds and the scatters. The wild symbol of this game is depicted by the green Diamond symbol. This icon appears only on second, third, and fourth reels respectively. Also, the diamond icon replaces any other game symbols, except the scatters.

The scatter symbol of this game is depicted by the Moon symbol. This beautiful Moon symbol also triggers the Free Spins round.

Other than that, you may also encounter several card symbols during your game play experience. However, these classic card symbols result in a relatively lower payout.

This game provides you an excellent bonus feature with which you will have more probability of winning exciting rewards. With three scattered Moon symbols, you will be offered 7 free games.

Furthermore, during the free games, the Tigress icon can appear during any pay line and results in a lucrative payout as defined below :

In terms of payout, this game will certainly provide you a truly rewarding experience. Obviously, the top-paying symbol is the beast herself. With five ferocious Tigress symbols, you will win a grand payout of 500 coins. 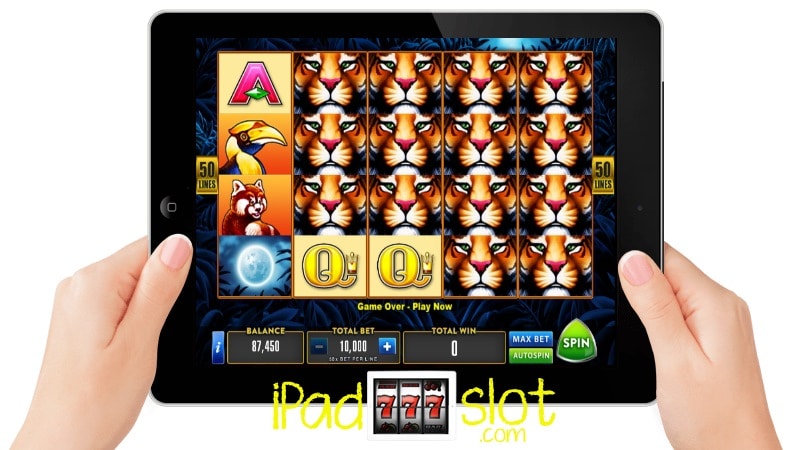 The standard payout structure is described below :

If you are really excited to explore the exotic Asian jungle, then this slot game will be quite apt for you. With its extravagant design, innovative graphics, rewarding bonus features, and a bunch of interesting symbols, you will have a wonderful gaming experience with it as you will with most Aristocrat games for iPad at the Heart of Vegas casino. Have not seen a real money version online for tigress just yet.

Quick Hit Ultra Pays Sun Dragon Free Slot App For players who have been in the business for quite some time now, the mere mention of ‘Quick Hit’ will mean one thing to most casino players i.e. Bally. The Ba...
Aristocrat Goblins Gold Free Slots Game The title of this Aristocrat slot game does reveal what the players are going to find when they start playing this game. On one hand, the slot has a magic theme...
Konani Free Slots App Lotus Land Review Lotus Land is an oriental themed slot game developed by world-renowned Japanese game developer Konami. The primary focus of this slot is on animals that are wid...
Aristocrat Mighty Cash Outback Bucks Free Pokies... Mighty Cash Outback Bucks is an slot machine powered by Aristocrat. This game is the latest one in the ‘Mighty Cash’ slots series that is very popular both onli...
Buffalo Inferno Aristocrat Free Play Slot Game Aristocrat casino software developers have a vast range of classic themed online slot machine games. Their games are easy to play and they are built with elegan...
Rocket Fellas Inc Free Slot Game Guide Rocket Fellas Inc Review Rocket Fellas Inc is an adventurous slot created by the game studio Thunderkick. It is a high-variance slot game with 5 reels, four ro...
Girls With Guns Frozen Dawn iPad Slot Free &... Developed by Microgaming the Girls with Guns – Frozen Dawn slot for iPad game is based on a heroine theme, nothing but chicks with big weapons. In this game, pl...
The Huntress Aristocrat Slot Free Play Guide The Huntress is an free online slot machine which comes from the Aristocrat studio. Just as can be deduced from the title, this online slot machine does come wi...
Queen of the Skies Spin Games Slot Review Queen of the Skies Slot Review Amelia Earhart is among the early heroines whose legacies live way longer than ten times their lives. She is the first woman kno...
Fu Nan Fu Nu Free AGS Slot Game Guide The oriental theme is one of the most popular genres among slots players. Its crystal clear to see the reason why this is the case as the oriental theme allows ...
Wicked Tales Dark Red Free Slot Game Guide Wicked Tales Drak Red is an online slot machine which comes from the Microgaming company. This online slot machine comes with a fantasy theme and as such, playe...
IGT Shamrockers Eire To Rock Free Slots Game Gui... IGT got in sync with modern players needs when they released Shamrockers slot machine. It is a cool 5 reeled machine that features 20 fixed paylines. It is musi...
Wolf Rising By IGT Slots Free Play Review Wolf Rising is a standard IGT creation that's been about for over 15 years now, the free iPad slot portrays a beautiful layout and standardized gaming platform ...
Six of the Best Free Aristocrat Mobiles Pokies G... On this page we have six of the best Aristocrat pokies to play on a mobile like an iPad, iPhone or an Android gadget. These are the ones that you must take a sp...
Konami Wonder Rose Free Slots App Review Wonder Rose is a free or real money enabled fairytale themed iPad slot game which comes from the Konami app stable. In this game, players meet a beautiful lady ...
NETENT Dazzle Me Pokies Game Guide Dazzle Me is a gem themed online slot powered by one of the leading game developers in the world, that is, Net Entertainment. The game comes with a unique reel ...
Motor Harley Davidson Freedom Tour Free Slots Gu... To some, these two iconic words ‘Harley Davidson’ quickly ring a bell while to some, these two words may be completely new. If you find yourself on the latter s...
Icy Gems Microgaming Slot Game Guide Icy Gems Slot Game Review Icy Gems is a nice slot game which comes from Microgaming and we rate it as a must play game for real money gaming. Icy Gems comes...
Twilight Spirit Aristocrat Free Slots By just watching movies and films that depict life back in the day, many people conclude that life in days gone by was better, happier, and easier well no annoy...
Lucky Angler a Snowy Catch iPad Slots Review Lucky Angler a Snowy Catch is a great slot to enjoy on your iPad or iPhone and the game is based on an ice fishing journey. Get ready to break the ice and reel ...
Tags: Aristocrat free iPad pokies, Aristocrat free iPad slots, Aristocrat Free Slot App Article Tags, Tigress free slots,