There are very few (if any) movies that are as universal like the Titanic flick that was produced by James Cameron. Titanic is a 1997 movie which is a fictionalized account of the biggest ship that had ever been constructed in it’s day before it went down to the bottom of the ocean.

The original movie starring Leonardo DiCaprio as Jack and Kate Winslet as Rose is full of everything from action, adventure, drama and romance. When spinning the five reels that come with 25 paylines in this Bally Technologies game adaptation of the Titanic film, players can expect to experience hot action and adventure on the high seas, but watch out for those big ice cubes 🙂

Note that its possible to play the game on your mobile so grab your iPad, Android or iPhone now. This slot is very well crafted from the movie and includes lots of drama and action on the game reels and the excitement from the movie is built into the bonus features very nicely.

** The Bally Titanic and / or similar slot games may be available to play on your iPad, iPhone, Android, Windows device, PC or Mac. Just take a peek at our FREE GAMES PAGE HERE. ** 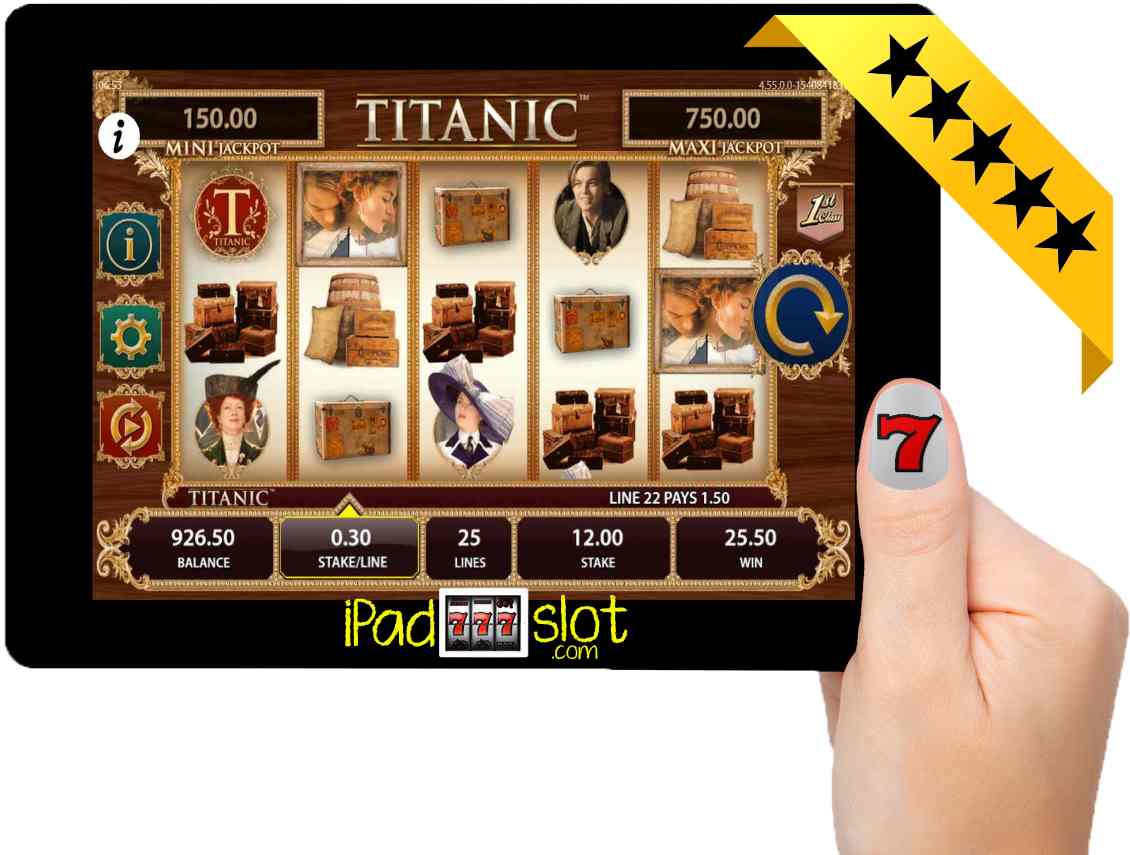 A wooden wall provides the background graphics of this slot which is rather plain but suits the theme of time gone by. The reel section is covered by a white colour so it’s nice and clean looks wise.

The symbols that players will find on the reels in the game include The ‘T’ icon, characters in the movie, a wagon, pair of gloves, a watch, suitcases, wooden treasures and a treasure chest. 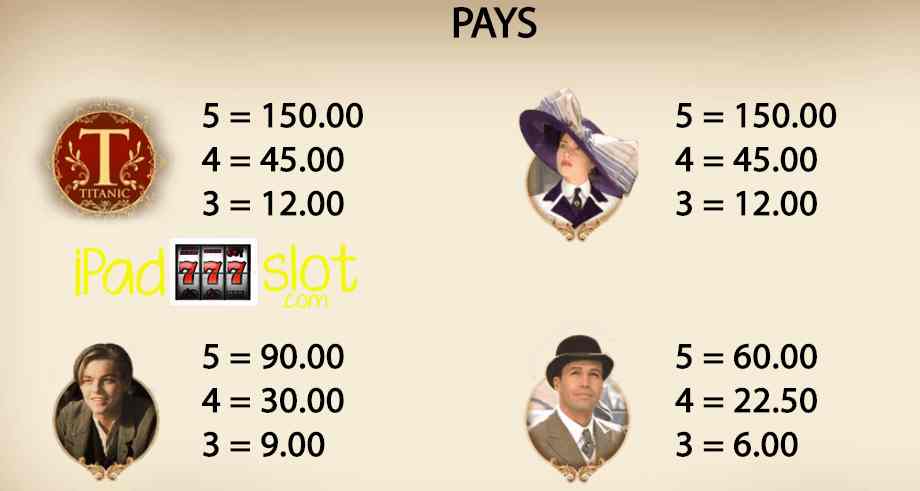 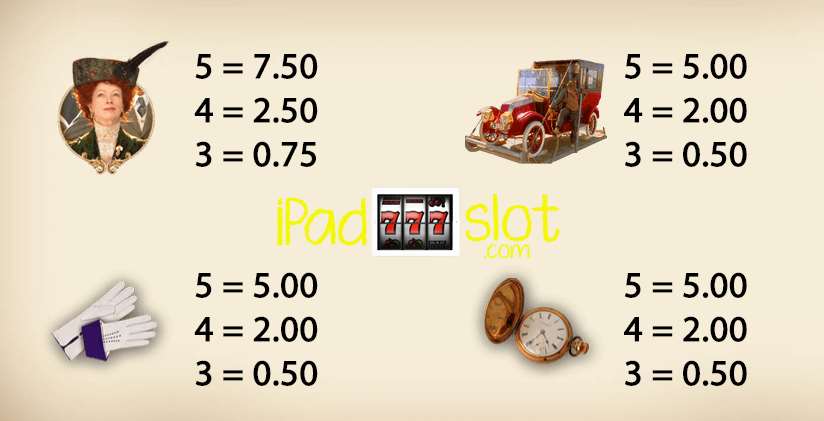 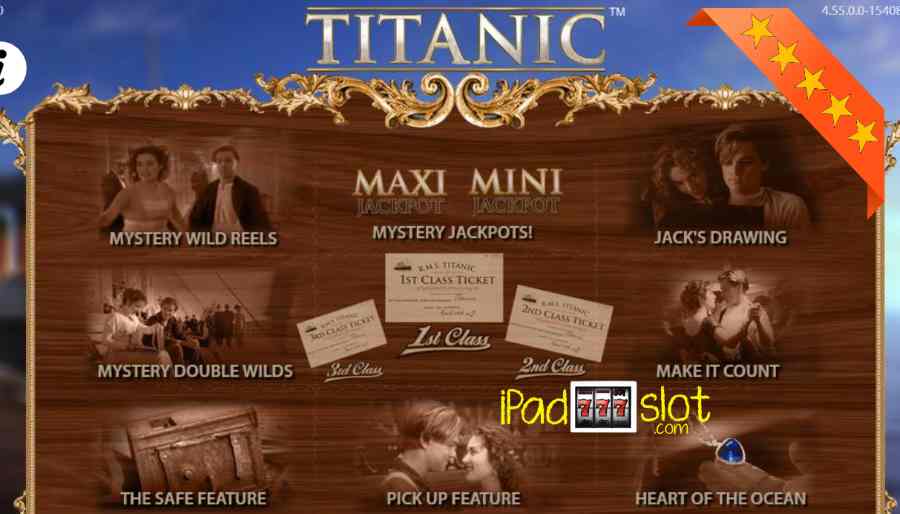 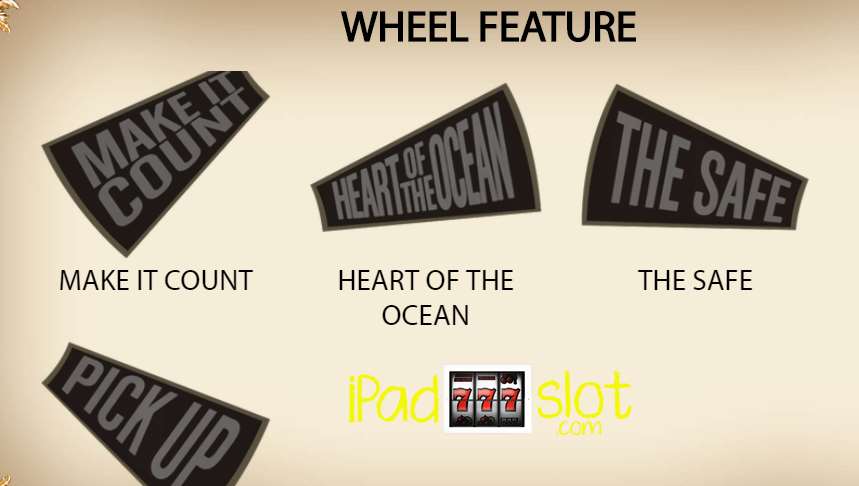 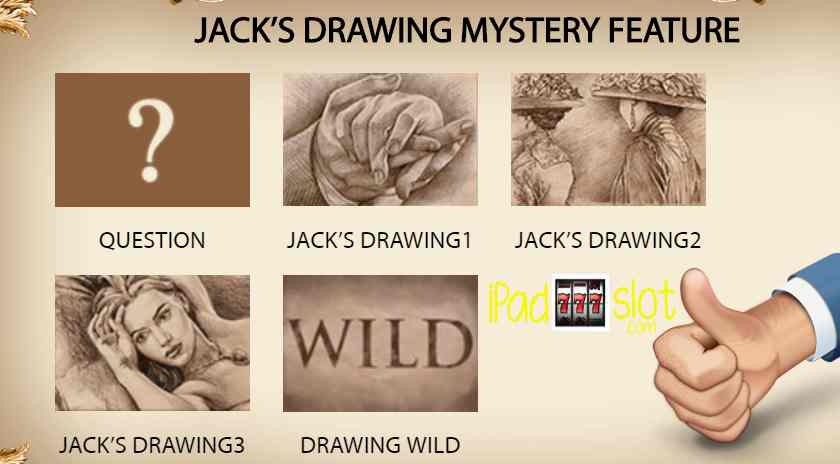 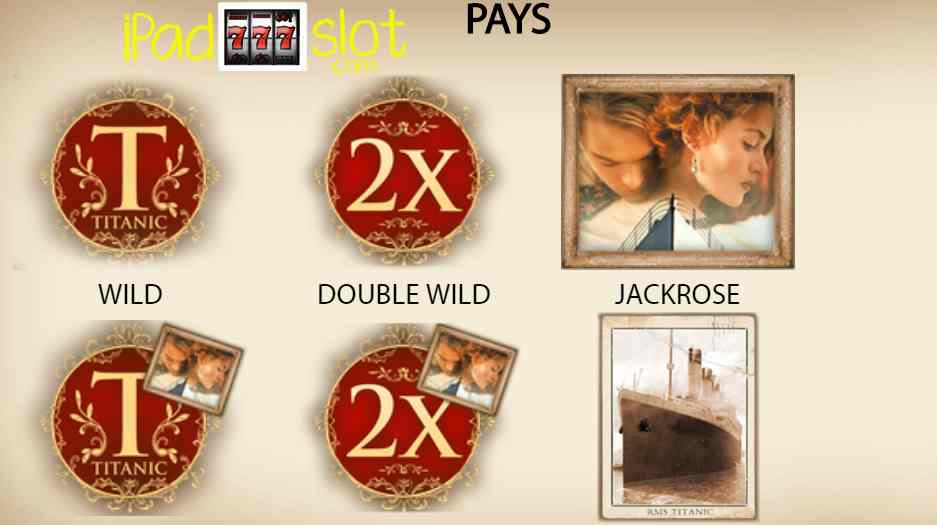 Titanic is quite an entertaining iPad slot game which comes with numerous bonus rounds, if you liked the movie from 1997 then you will love this game. Out of a 10 point rating, this slot gets a 9 point rating in our guides on the most popular Bally slot apps. 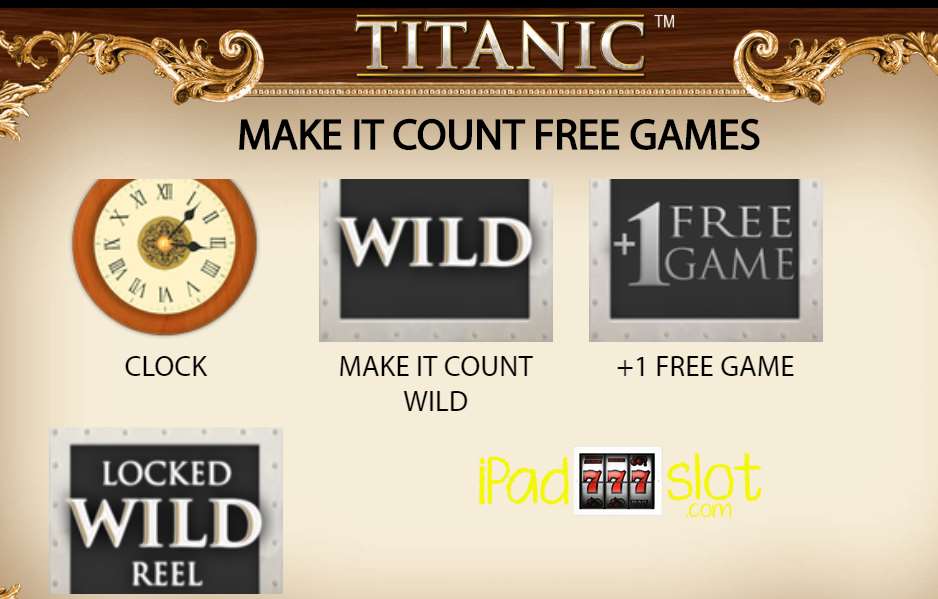 About the Titantic Movie – All You Need to Know

The RMS Titanic was a UK passenger ship on her maiden voyage from Southampton to New York City. A 17 year old rich girl falls in love with a kind but poor gifted 20 year old artist named Jack aboard the luxurious “unsinkable” Titanic cruise ship. Jack Dawson (Leonardo) won the cruise ticket from a poker game. What could possibly go wrong on this cruise? Well plenty of course!

Konani Free Slots App Lotus Land Review Lotus Land is an oriental themed slot game developed by world-renowned Japanese game developer Konami. The primary focus of this slot is on animals that are wid...
Sumatran Storm Slots Game Guide This is one of many IGT’s animal-themed slots. Sumatra is an island found near Indonesia where one can find a lot of tigers and other wild animals. The objectiv...
Lightning Link Tiki Fire Pokies (Slot) Free ... Lightning Link Tiki Fire is an online pokie machine developed by Aristocrat. This online slot machine comes with a fire theme as you guessed. Not only will play...
Mr Cashman Magic Eyes Free Pokies Game Mr Cashman Magic Eyes is an online slot machine which comes from the Aristocrat company. One word from the game’s title i.e. ‘Magic’ does reveal the theme of th...
Medieval Money Online Slot Review Medieval Money Slot Review Featuring 4 bonus rounds, IGT has gone all out with a comical recreation of the dark ages involving a series of free spins, massive ...
Ainsworth Flash Cash Free Pokies Guide What greets the eye is a substantial display of vivid imagery powered by high definition graphics and an impressive bold theme when playing Flash Cash pokies. I...
Nordic Heroes by IGT Slots Game Guide Nordic Heroes is a unique game developed by IGT, which focuses on fantasy warfare along with having a layout, which closely resembles pokers. The game layout is...
Golden Knight Free High 5 Games Slots Golden Knight is a Royal themed online slot machine that comes from the High 5 Games company. Players looking to enjoy the game ought to know that they will be ...
Lion Festival Boosted Celebration Free Konami Sl... The Lion Festival Boosted Celebration is an Asian themed slot game from the Konami stable. This online slot game pays tribute to the Lion Dance, a festival that...
Ainsworth Rich n’ Wild Slots Free & R... Here is another fun slot from the house of Ainsworth that promises to unearth the treasures from the forests of Mexico. This Mexican rainforest themed slot take...
Cosmic Fortune iPad Slots Review Cosmic Fortune is the newest iPad slot to be released by NetEnt and it is surely a great game to play for real money. The game is based on an alien invasion and...
Crazy Goose Free IGT Slot Review In this comical spin on animated animals, you are given the opportunity to explore the farm life over 5 reels and 100 ways to win big. The vast amount of paylin...
Disco Spins iPad Slot Game Free Play & Revi... Put on your bright clothes and take a trip back in time too enjoy the 80's era with Disco Spins, an iPad slot created by Net Entertainment. This game is fully t...
Miss Kitty Gold Free Slots App Guide Miss Kitty Gold is an pussy cat anime-themed game from the Aristocrat stable of awesome iPad and iPhone compatible slot games. This is a simple but elegant game...
Arctic Dreaming Free Slots Game Guide In this Aristocrat powered slot game, you get to visit the Arctic region and experience how it feels to survive in extremely cold regions that themed into the g...
Fortune Teller iPad Slot Machine Review Learn your fortune when playing a great video iPad slot from Net Entertainment. Fortune Teller is a game entirely based on fortune telling and with this game, t...
Caribbean Kitty by IGT Slots Game Guide Caribbean Kitty is an animal themed slot game from IGT. This progressive slot game primarily focuses on cats, therefore, when spinning the reels of this slot, p...
Preview of the Flowers NETENT iPad Slots Game With Flowers, iPad players will enjoy a flowery themed game that is packed with features. The game from NETENT is fun in free play and a real money version and ...
Six of the Best Free Aristocrat Mobiles Pokies G... On this page we have six of the best Aristocrat pokies to play on a mobile like an iPad, iPhone or an Android gadget. These are the ones that you must take a sp...
IGT 777 Sizzling Hot Roll Free Slots This is a game from the good old days but it's still an entertaining slot from IGT plus it's iPad and iPhone compatible. This game is pretty simple, it doesn’t ...
Tags: Bally free app, Bally free iPad pokies, Bally free iPad slots, Titanic pokies game app, Titanic slot game app,