This is one of the many IGT branded slot games which educates while at the same time providing you with the best in terms of gaming entertainment. This slot is based on one of the most talked about stories in Greek Mythology i.e. the story of Troy, the city where the finest things on earth were found and where the world’s wealthiest people lived.

Your quest to find your own riches in this iPad slot will start when you spin the game’s 5 reels that come with a massive 1024 ways to win some awesome pay-outs. 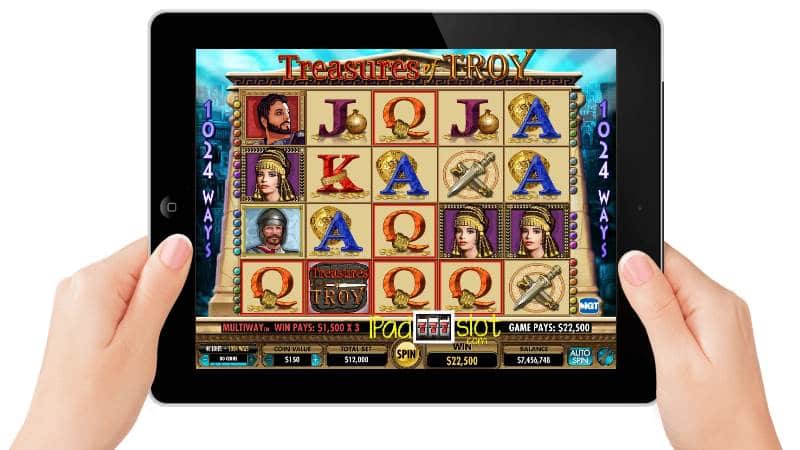 The background of this slot depicts an ancient Greek village exposing the architectural brilliance of Greek structures. 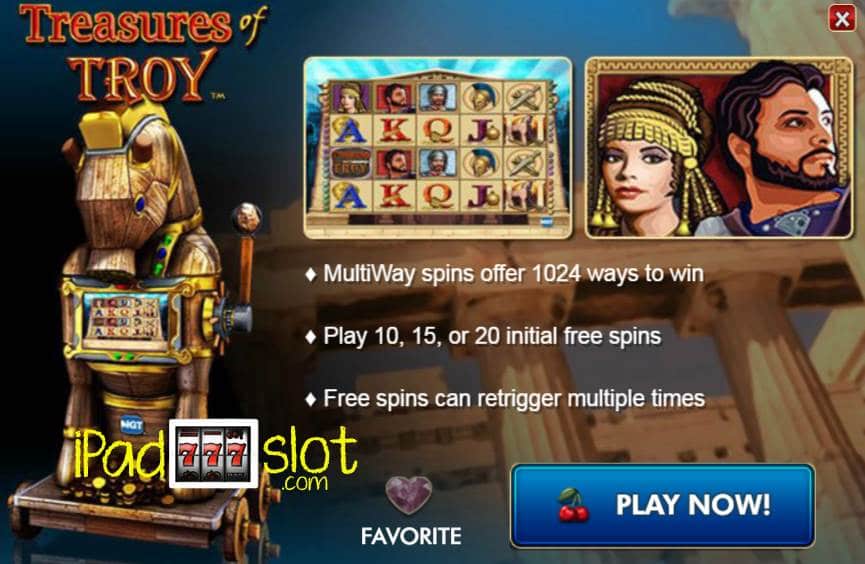 The reels of this slot resemble an ancient Greek building. The symbols on the reels include an Achilles sword, Menelaus, Helen of Troy, Paris of Troy, the game logo, and a steel combat helmet. The game also features traditional poker symbols namely A, J, Q, and K. 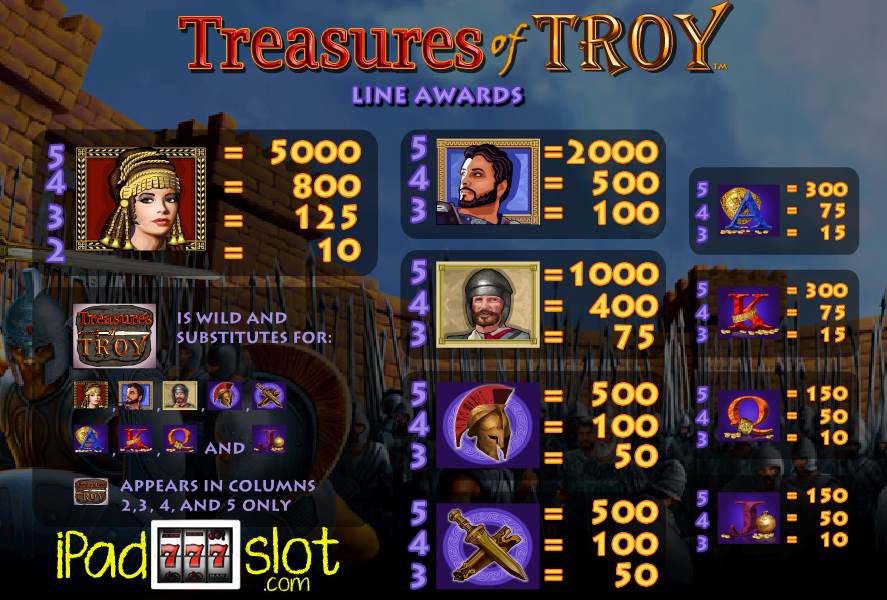 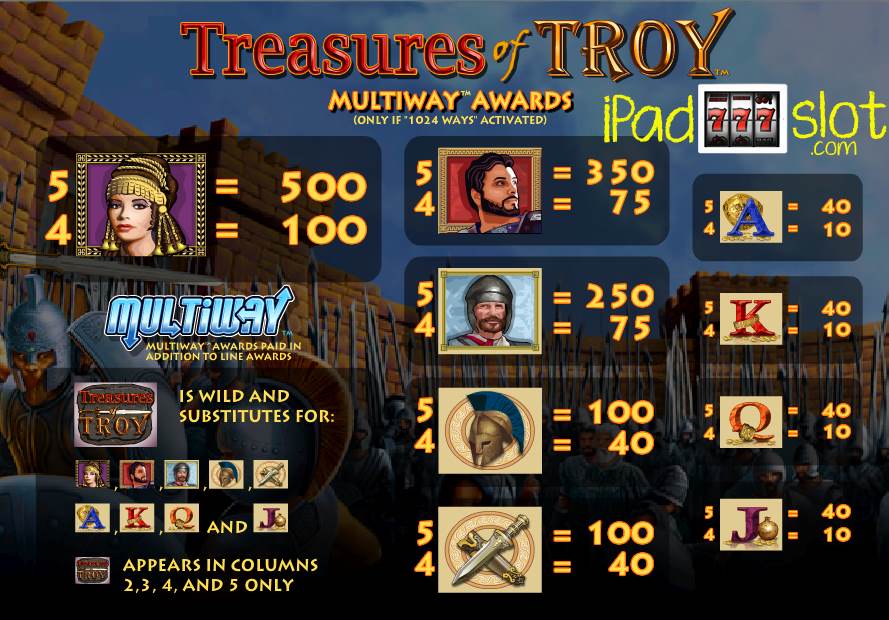 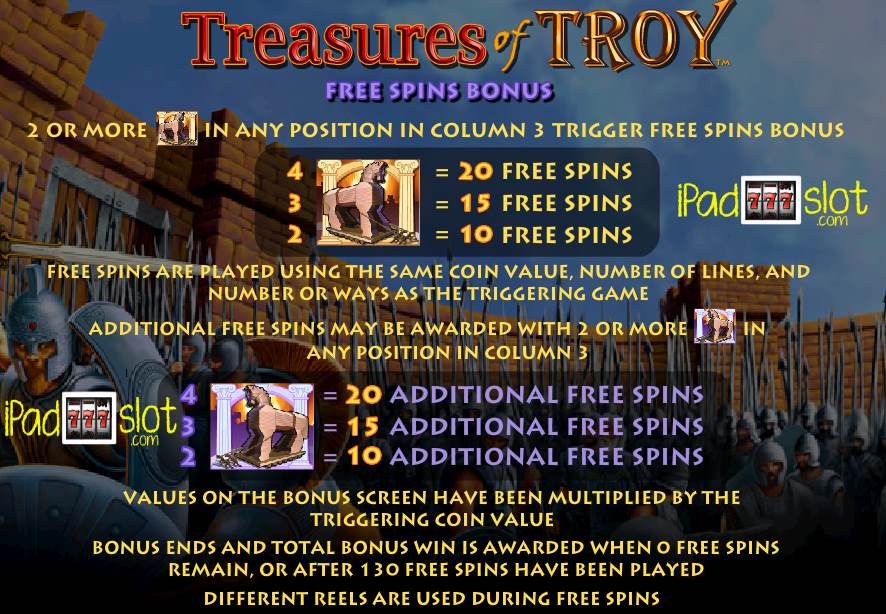 The city of Troy was known for its riches and this Troy branded game stays true to his reputation by offering some excellent rewards in both the base game and the free spins bonus game. This iPad slot gets an 8 point rating out of 10 points in our Treasures of Troy review guide.

Choy Sun Doa Slots Free Play Guide Choy Sun Doa features to be the finest slots that is developed by Aristocrat with Asian flavours in the theme. The name of this game literally means "God of Pro...
Bookie of Odds Free Microgaming Slot Game Guide Bookie of Odds is a horse race vibed slot machine developed by Microgaming. If you like pokies machines like Spring Carnival then this is your must play game. ...
Wolf Run Slots Game By IGT Free Play Guide Wolf Run is a Wolf-themed slot game from IGT. The game has 5 reels and 40 pay lines. The players can get to bet on a minimum coin size of 1 and this can go up t...
Aztec Goddess Free Slots Game Guide Ancient Mexican history is dominated many tales of the Aztec empire and culture. Aristocrat Gaming in this slot developed a game which retraces this history whi...
Lightning Storm Dolphin Treasure Free Pokies (Sl... Lightning Storm Dolphin Treasure is an Aristocrat online slot game that comes with an aquatic theme. When spinning the five reels of this online slot machine, p...
An Evening With Holly Madison Pokies Review NextGen has created a new and exciting themed video slot for iPad casino players that will surely entertain for hours. An Evening with Holly Madison is a 25 pay...
Microgaming Asian Beauty Free Pokies Review Asian Beauty by Microgaming is a popular iPad compatible slot machine game, which comes up with a great interface and theme line. With 243 paylines and spanning...
Legend of Shangri La Online Slot Guide The Legend of Shangri La is a NetEnt slot game, which has a unique cluster pays ways to win along with 6 reels. With the main game theme based on monks and Budd...
Wolf Moon by Aristocrat Free Slots app If you are ready to have a good time gaming and seeing abundant wildlife in reservation then it’s an ideal time to spin the reels of Wolf Moon. The game is slot...
Wheel Of Fortune On Tour by IGT Free Play Guide Wheel of Fortune on Tour is a slot machine game, which is the direct gaming adaptation of a very popular TV show of America, Wheel of Fortune hosted by Merv Gri...
In Bloom Free Slots by IGT Guide In Bloom is a unique and light flower themed free iPad slot game app from IGT. The has gets 5 reels, 3 rows, and 40 pay lines and a host of bonus games and feat...
Jesters Fortune Slots Free Play Guide Jesters Fortune is a carnival-themed iPad slots game from Aristocrat that comes with five reels with 25 paylines. Entering the Jesters Fortune carnival can be f...
Twilight Spirit Aristocrat Free Slots By just watching movies and films that depict life back in the day, many people conclude that life in days gone by was better, happier, and easier well no annoy...
100 Pandas Slots by IGT Free Play 100 Pandas is the most amazing free iPad poker machine by IGT and brings you excitement and possibly bundles of cash also along the way. This game consist of 5 ...
Red Hot Wild Free Barcrest Slots Guide In recent times, 3 reel slots have lost their popularity a bit thanks to all the fancy games in the market with all the wiz bang graphics. However, SG Interacti...
Zombie Hoard Free Microgaming Slot Game Guide Zombie Hoard is an online slot which comes from the Microgaming company. As one can deduce from the title, this pokies machine comes with a horror theme chocked...
Ainsworth Rio Riches Stacked Up Free Aussie Styl... Ainsworth powered Rio Riches Stacked Up slot game comes with a carnival theme. While the carnival theme on its own is enough to entice players, this slot offers...
Phoenix Fantasy Slots By Aristocrat Free Play Gu... The magnificent bird, Phoenix has been already portrayed in a wide variety of mythologies. Taking this into consideration, this online slot game features the ap...
Genies Riches By Aristocrat Free Play Guide If you are a slot game lover who often prefers to try out Aristocrat iPad games, then Genies Riches will be a perfect gaming option for you to have a crack on. ...
Mega Boy iSoftBet Slots Guide There is competition between slots developers to release different casino slots. Granted, slots developers are exploring all available options to bring out casi...
Tags: IGT free app, IGT free iPad pokies, IGT free iPad slots, Treasures of Troy Free Slots,