Triple Red Hot 777 is a iPad slot machine game which provides players an altogether experience of real life slot games found in casinos of Las Vegas. Developed by IGT, this slot game has 3 reels and 5 winning payout lines. The game has a varying RTP from 93.01 to 96.53% depending on the version you play.

Triple Red Hot 777 slot machine game is a great example of how IGT has turned the tables of slot machine games by providing extreme scoring features in a classic featured game. The main characters in the game are the set of casino 7 and other related characters. 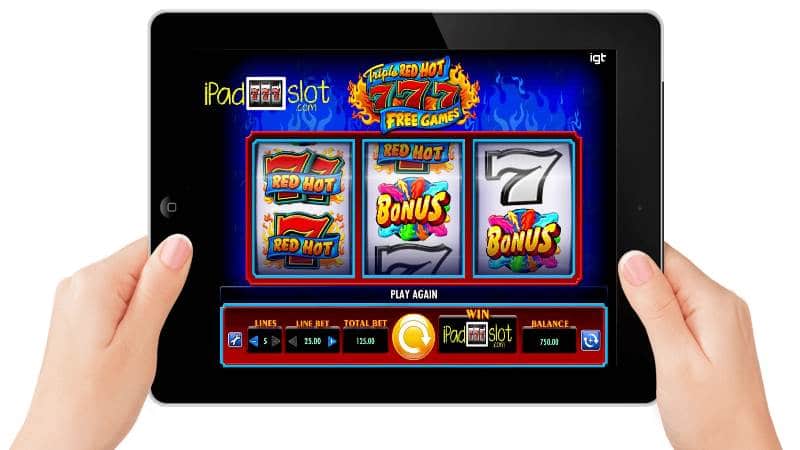 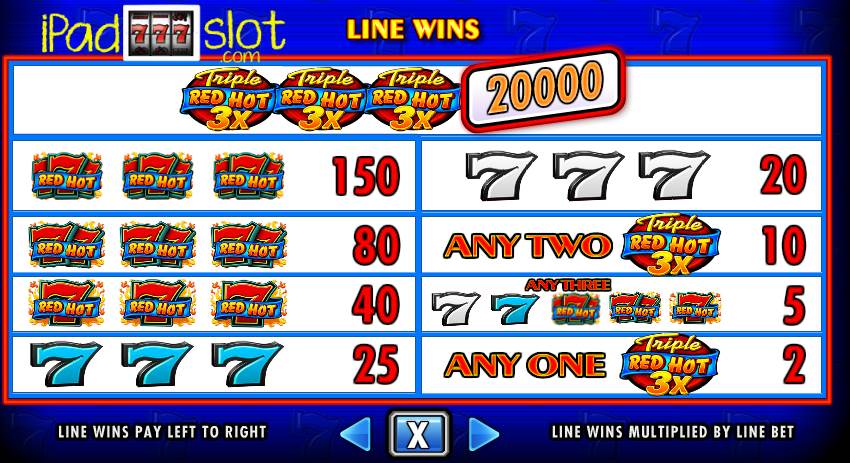 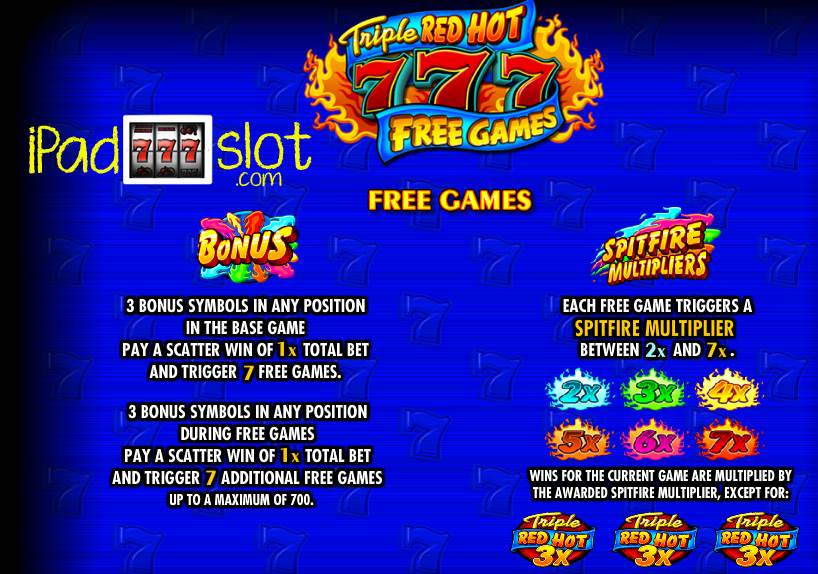 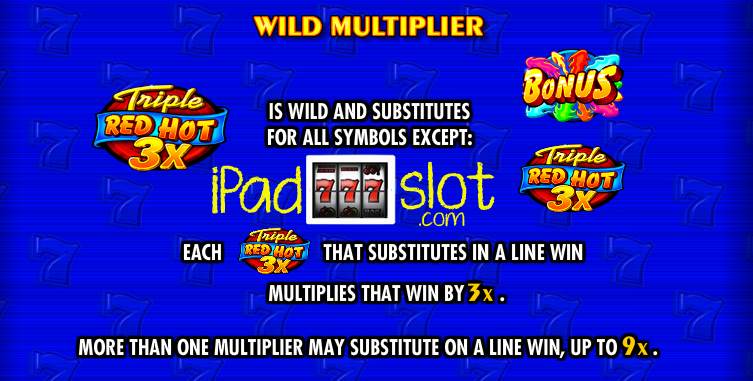 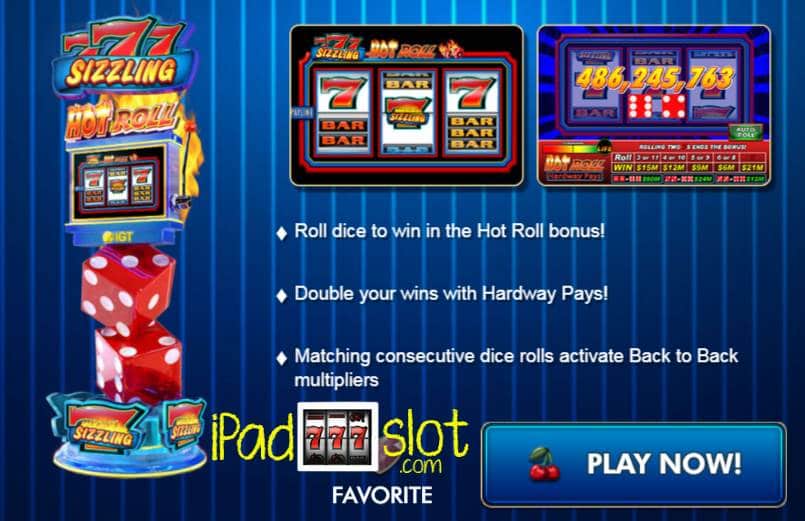 Triple Red Hot 777 is a Las Vegas themed iPad slot and it’s one of the more popular games from IGT. The game contains features such as Wilds, Spitfire Multipliers, Scatters and all these symbols assure the real money punters will have no problems in getting a few nice pay-outs. We personally like old school games in a simple genre so we score this a 8.4 points from 10.

Jungle Monkeys Free Ainsworth Preview Jungle Monkeys is a iPad slot game from Ainsworth gaming technology. It is a five reel video slot with 100 paylines. It comes with the 5x3 that is a standard fe...
Aristocrat Peacock Riches Free Slot Game Guide If beauty, the orient and money make the perfect combination, then Aristocrat has developed the perfect 5 reeled video slots game for you to play for free onlin...
Safari Spirit Ainsworth Free Mobile Slot App Safari Spirit is an online slot game from Ainsworth which comes with a African wildlife theme. Players playing this online slot machine can expect to be virtual...
Mr. Cashman Jewel of the Enchantress Free Aristo... Mr. Cashman Jewel of the Enchantress is a ripper (great) pokies game app released by the well-known Aussie based slots manufacturer Aristocrat. What’s appealing...
Dragon Legend PG Soft Free Slot Guide Dragon Legend is a PGsoft powered online slot machine that’s based on two of the symbolic creatures in Asian culture, that is, the koi and the dragon. DRAGON L...
Hula Nights Free Barcrest Slots App Hula Nights is a Hawaiian themed slot game which comes from the SG Interactive Barcrest stable of must play games. In this iPad slot game, players get to take a...
Island Princess Quad Shot Free Ainsworth iOS Slo... Island Princess is an awesome Aztec themed slot game developed by Ainsworth. When playing Island Princes Quad Shot, players are taken back in time, in the Aztec...
Fa Fa Twins Free Slots Game Guide This is an entertaining and unique iPad compatible slot game from Betsoft. The slot introduces you to two twin sisters who will use their charm and magical powe...
Mr Cashman Magic Eyes Free Pokies Game Mr Cashman Magic Eyes is an online slot machine which comes from the Aristocrat company. One word from the game’s title i.e. ‘Magic’ does reveal the theme of th...
Miss White Free Slots Game Review IGT in this game rekindles the tale of Snow White, one of the most popular legends to have ever been told. Miss White slot game emulates the earliest Snow White...
Fortunium Free Microgaming Slot Review Fortunium is an online slot machine which comes from the Microgaming company This game has a vintage feel as the background sounds depict a heyday city and the ...
Lucky Count Aristocrat iPhone Pokies app (free v... This game revolves around a dreadful Dracula character where the players will experience an eerie, spooky, & gripping adventure in this free Aristocrat iPho...
Cats IGT Slots Free Play Guide Players who have visited land-based casinos to play slot games will know that one of the most popular and most played slot games is the Cats slot machine. The g...
Frankenslot’s Monster Preview A time comes when a developer releases a high quality slot machine to compete with other new slots. Frankenslot’s Monster evidences that this time came for Bets...
Book of Ra Novomatic Slots Game App Review Book of Ra is an Egyptian themed iPad slot game which was has been developed by Novomatic. This game is based on the adventures of an explorer who visited Egypt...
Jeopardy IGT Free Slots Game Review The Jeopardy iPad slot game is a branded game from IGT. The game is based on the popular NBC and ABC quiz show by the same name, that is, Jeopardy. The show sta...
Gold Coin by IGT Free Slots Game Guide Gold Coin slot game is a great addition for players from IGT. This is a retro-themed slot game which mixes features from past slot games and features from moder...
Cat Paws Slots Machine by IGT Game Review Cat Paws is a feline themed slot game developed by IGT. When spinning the reels of this slot game, players get to meet different wild cats including lions, tige...
Fu Nan Fu Nu Free AGS Slot Game Guide The oriental theme is one of the most popular genres among slots players. Its crystal clear to see the reason why this is the case as the oriental theme allows ...
Sacred Guardians Slots Free Play Guide Sacred Guardians is a awesome animal themed slot game from Aristocrat. This is a 4 level progressive game which features some cute animals on the reels. Anyone ...
Tags: IGT free iPad pokies, IGT free iPad slots, Triple Red Hot 777,