The deep blue sea is filled with wonders, starting from magnificent wildlife to the lost treasures. Thus, as a player, you will explore the beautiful coral reefs & ocean beds and peek beneath the deep water’s surface.

So, if you’re ready to delve into this deep blue ocean, then “Turtle Treasure” will certainly fulfill your pokies gaming requirements. If you like aquatic themed pokies like Dolphin Treasure, Jaws or Lobstermania then this is your go-to iPad slot to play.

This game comes as a sea theme based online slot game where it features a wide variety beautiful marine creatures, for example, starfish, clams, and the magnificent sea turtle etc. Also, you will even discover some sunken treasures, such as pearl rings, golden doubloons, and treasure chests. Now, go through this review and get ready to explore the exquisite watery paradise.

You can play free slots like Turtle Treasure by Aristocrat on an iPad, iPhone or Android devices direct from our site. 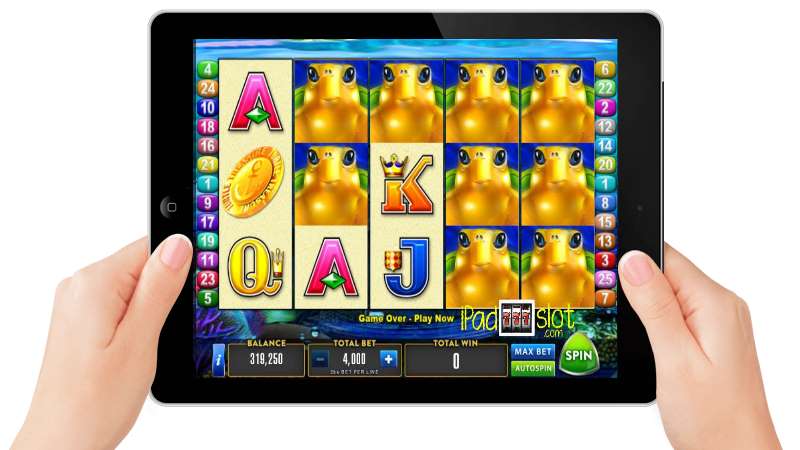 This online slot game features a straight-forward and simple gameplay where the wins are calculated in coin denomination. Here, all the lines are played at a line cost of 25 coins. Your Total bet = Line Cost * Bet Per Line. Choose your total bet prior starting the game and then use the Spin button to spin a reel. 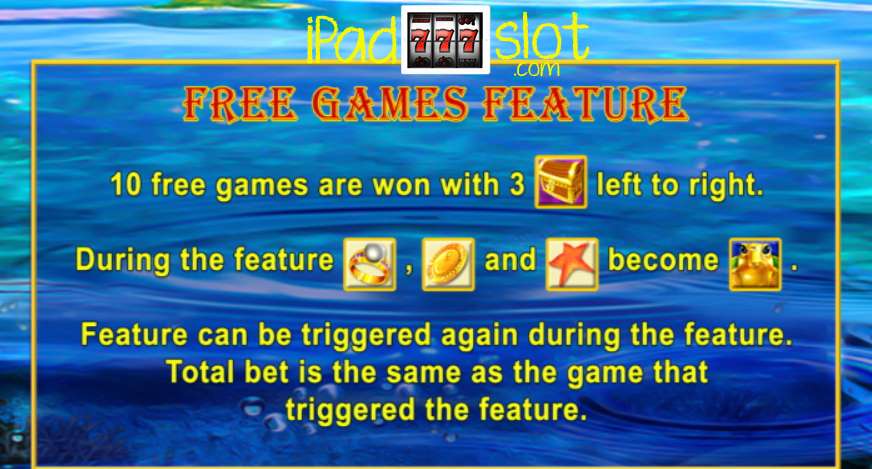 This is a fairly average Aristocrat iPad slots game overall as it’s a bit dated, play it free at Heart of Vegas or play many other Aristocrat games for real money online from our casino reviews.

Rainbrew Online Slot Guide Rainbrew is an online slot machine which comes from Microgaming. This 243 ways to win 5 reel game fuses a fantasy and a magic theme thereby making it the perfec...
NextGen Tianlong Slots Game Review The Dragon is a sacred symbol in the oriental way of culture because it is thought to be lucky for the people. This iPad slot machine has been developed jointly...
Pharaoh’s Fortune Slots by IGT Free Play Guide Pharaoh’s Fortune is one of IGT’s premier classic casino games based on the ancient Egyptian culture, and history of the country featuring the times of sphinx a...
Jackaroo Jack Lightning Box Free iOS and Android... Jackaroo Jack is an online slot machine which comes from the Lightning Box stable. This iPad, Android & iPhone compatible slot comes with an adventure theme...
Crazy Cows iPad Slot Game Free Preview The barnyard is full of action and players will be sure to collect some great payouts from Crazy Cows by Play’n Go. This iPad slot game is super exciting and wa...
Aristocrat Brazil Free or Real Play Slots Guide The iconic imagery of Brazil by Aristocrat is truly exceptional. Starting from the lovely & gorgeous beaches and massive rainforests to the pageantry of Car...
Mega Boy iSoftBet Slots Guide There is competition between slots developers to release different casino slots. Granted, slots developers are exploring all available options to bring out casi...
Double Happiness Pokies App from Aristocrat (FRE... Double Happiness is a bright and lively slot game designed by Aristocrat Gaming. This is a 5 reel and 25 pay-line online slot. The design is based on an Asian t...
Book of Oz Slot Game Guide Book of Oz Slot Game Review Book of Oz is an 10 payline online slot machine which comes from Microgaming. For those who are into fairytale books or movies, odd...
A While On The Nile Free Slots Guide A While On The Nile online slot game is developed by NextGen Gaming. It is a 5 reel and 50 pay-line slot that is iPad ready to go. This game is rich in color an...
Best Free and Real Money Play Roulette Casino Ap... Think about a game of excitement, fun and possible wins, well let’s think about roulette for a bit. Though filled with excitement, the game of roulette can be b...
Royal Spins by IGT Free Slots Guide The light hearted fruity slots theme bring an element of character to what one can imagine royalty to have been like back in history. Another fine free pokies g...
Celestial King Free Bally Slots App Guide Celestial King is an SG Interactive powered slot game from Bally which comes with five reels and 25 paylines. Designed with an Asian theme, playing this game yo...
Twilight Spirit Aristocrat Free Slots By just watching movies and films that depict life back in the day, many people conclude that life in days gone by was better, happier, and easier well no annoy...
In the Shells IGT Slots Game Guide This is another nautical themed slot game from IGT developed in the same genre as other water and ocean themed slots from the same developer. Quick Start Guide...
Riches of Ra Slots Game Guide Riches of Ra takes players on an exciting journey and the game is all based on the Egyptian Sun God, Ra. It is one of the more popular iPad pokies offered by Pl...
Betsoft More Gold Diggin Free iPad Slot Review One of the latest and most innovative iPad slot games to date, More Gold Diggin pokies by Betsoft introduces a fresh twist to slot games by incorporating stunni...
Monopoly Bring The House Down Barcrest Free App It's time to ‘bring the house down’ and take all the money in this SG Interactive powered slot game from the Barcrest Studio of popular online free and real mon...
Joe Blow Gold Free Aristocrat Pokies Game Guide Joe Blow Gold is an Aristocrat powered online pokies machine machine. This slot comes with a mining theme so if you like Where's the Gold then this is your game...
Dollar Eagle Slot Game Free Play Guide Dollar Eagle is an free online slot machine which comes from the Aristocrat company. This online slot fuses two themes i.e. an animal and wealth theme, it's a b...
Tags: Aristocrat free iPad pokies, Aristocrat free iPad slots, Aristocrat Free Slot App Article Tags, Turtle Treasure free slots,