Wheel Of Fortune On Tour by IGT Free Play Guide

Wheel of Fortune on Tour is a slot machine game, which is the direct gaming adaptation of a very popular TV show of America, Wheel of Fortune hosted by Merv Griffin. The game features how the players ride their luck, win rounds after rounds, and win some prizes and big jackpots.

The general configuration of the game suggests 5 reels and 30 paylines with maximum payout being 2500X as the winning wager. The bet per line ranges from 1 to 200 and consequently, the maximum bet coin that is spent is 10000 coins. With a theoretically high RTP of close to 96.60%, the game welcomes the players to a completely new world of scoring coins and jackpots.

Since the game is based on the real time game show; lower-valued symbols of the game occupy some of the final positions, and they offer nothing more than a modest amount of 250 coins at maximum. 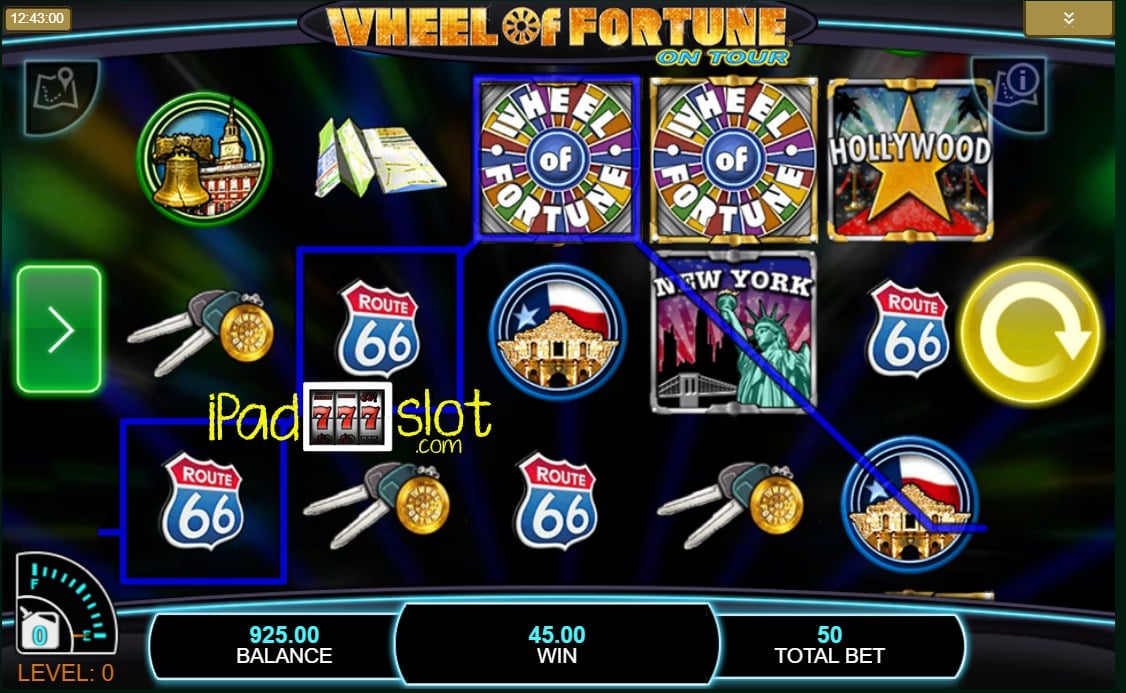 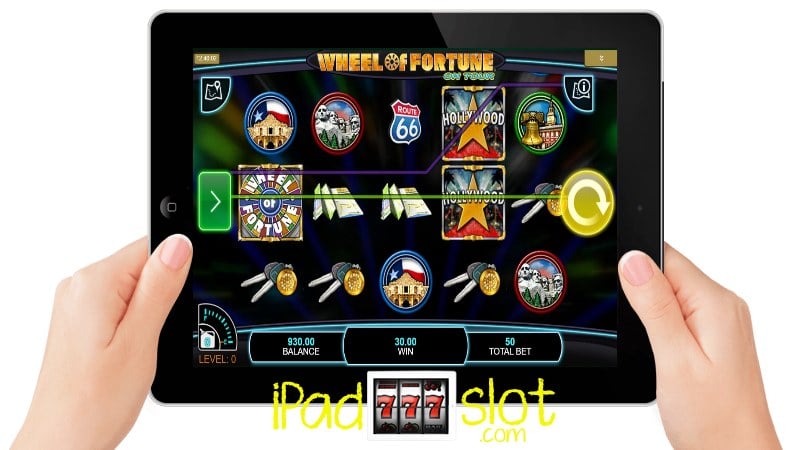 They start up with Level Up Plus feature, which gifts the player various types of jackpot and free spin awards. The feature shows up a fuel meter and when the meter is full, it promotes the player to next level, where on every level, the awards bonus levels range as the following.

This feature requires the players to spin the fortune wheel at a separate screen. The rewards are possible payoffs, and these are determined at the end of each rounds after spin. Summarizing Wheel of Fortune on Tour

Wheel of Fortune on Tour is a full feature-studded online slot machine game created by IGT, with many bonus symbols and features. Wilds and bonus symbols play a huge part in the game resulting wins quite often than usual. Overall, this is a fun-filled slot machine game for all types of gamblers to enjoy on iPhone or iPad devices for free or cash.

Miss Kitty Gold Free Slots App Guide Miss Kitty Gold is an pussy cat anime-themed game from the Aristocrat stable of awesome iPad and iPhone compatible slot games. This is a simple but elegant game...
Titans of the Sun Theia iPad Pokies Review and F... Titans of the Sun Theia is an incredible iPad pokies game that's powered by Microgaming. It was released in October 2015 and is centered on Greek mythology, so ...
Phoenix Fantasy Slots By Aristocrat Free Play Gu... The magnificent bird, Phoenix has been already portrayed in a wide variety of mythologies. Taking this into consideration, this online slot game features the ap...
Fortune Teller iPad Slot Machine Review Learn your fortune when playing a great video iPad slot from Net Entertainment. Fortune Teller is a game entirely based on fortune telling and with this game, t...
Shamans Dream Free Aristocrat App Review & ... With Shamans Dream, you will step into the fascinating world of Native America & discover the most sacred & oldest traditions. This is another online vi...
Triple Diamond By IGT Free Play Guide For those who love playing iPad slot machine games, we are pretty sure that you may have tried almost everything, from the more complex slots with 40+ play line...
Top 2021 Free or Real Money iPad, Android &... Below you can see a few samples of our free slots available on our site for iPad, iPhone and Android devices. These are all free play games from IGT, High 5 ...
Pixies Of The Forest Slots Game Guide Pixies of the Forest, the slot game from IGT shall take the players to a fantasy-filled world where pixies rule. The game gets 5 reels and 99 pay lines for the ...
Book of Ra 6 Deluxe Novomatic Free Slots App Book of Ra 6 is an Egyptian themed iPad slot game from Novomatic which is the latest addition to the Book of Ra slots series. Though this slot is the latest add...
Get Clucky Free IGT Slot Review & Game Guid... Play your way through an eggciting IGT gaming experience which has been designed on 5 reels and 20 paylines which sports a number of fantastic features includin...
Wheel Of Fortune Triple Extreme Spin Free App Ga... Wheel of Fortune Triple Extreme Spin is a popular iPad game developed by IGT. This is one of the top-quality slot machine games in the Wheel of Fortune series. ...
Free Play Wolf Run Hot Roulette Slots by IGT Wolf Run Hot Roulette is an animal themed iPad slot game. Specifically speaking, this is a wolf themed game as its primary focus is on wolves. Players of IGT sl...
Crazy Rich Asians Slot Preview, Where to Play Re... Aristocrat has partnered up with Warner Bros. Consumer Products to develop and release the Crazy Rich Asians slot machine for casino punters. The Crazy Rich ...
Hotter Than Hot Slots by Ainsworth Free & R... Hotter Than Hot is a classic example of how Ainsworth gaming has moved in the range of developing superior online iPad player slot  games. With a game as challe...
Dolphins Pearl Deluxe Novomatic Free Play Guide Marine life is the central theme of Dolphins Pearl Deluxe online slot as you expect, and players who love a slot game that leans more towards these beloved sea ...
Balloonies iPad Pokies Machine Review & Fre... Would you mind a trip down memory lane? Of course you wouldn’t. Remember balloons and how elated you felt playing with them in your toddler days. Nowadays, kids...
Aristocrat Red Baron Free Slots Guide Do you know "Red Baron" - the famous German fighter pilot? This legendary & fearsome character ruled the skies from his cockpit in a red bi-plane during Wor...
Dolphin Treasure Gold Free Aristocrat Pokies Are you ready for more fun than the original Flipper themed pokies game loved by millions around the world? ok well check-out the Dolphin Treasure Gold slot mac...
Aristocrat Brazil Free or Real Play Slots Guide The iconic imagery of Brazil by Aristocrat is truly exceptional. Starting from the lovely & gorgeous beaches and massive rainforests to the pageantry of Car...
Big Red 2 Free Slots Game Review Classic slots are a favourite of most gamers and in this slot, Aristocrat Gaming fuses elements of classic slots and also elements of modern video slots in brin...
Tags: IGT free app, IGT free iPad pokies, IGT free iPad slot, Wheel Of Fortune On Tour free slots,