Wheel of Fortune Triple Extreme Spin is a popular iPad game developed by IGT. This is one of the top-quality slot machine games in the Wheel of Fortune series. It keeps up to its name and offers a plethora of high-scoring rounds in the form of a awesome free spin feature as you would expect from the big wheel slot favourite game.

The game contains 5 reels and multi-directional paying schemes with 720 ways to win big. Its bet amount ranges from 50 to 2500 and all these come with a RTP of 95% to 97% depending on where you play it. You should also take a look at the Wheel of Fortune on Tour and the Wheel of Fortune Ultra 5 Reels slots. 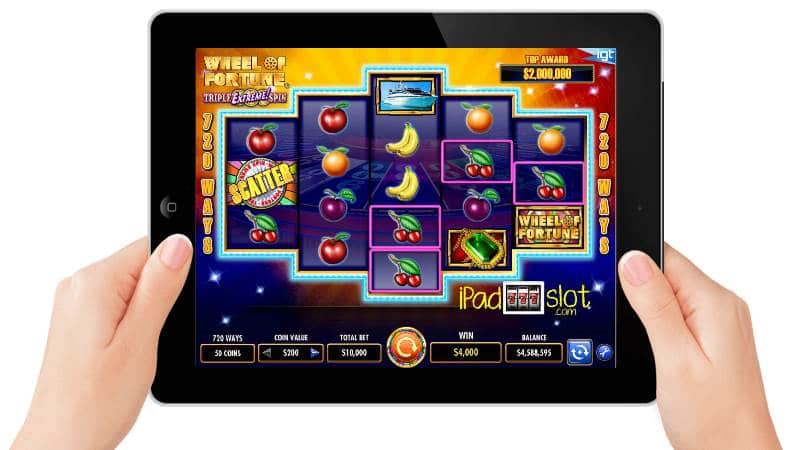 Wheel of Fortune Triple Extreme Spin is a premier slot machine game that features characters based in Las Vegas and contains some of the typical images and symbols.

The highest paying generic symbol is the Wheel of Fortune image, which pays out the highest amount followed by a Yacht, Gem, and a Car in this segment. All these symbols are backed with low-pay symbols such as apple, cherries, orange, plums, and banana. 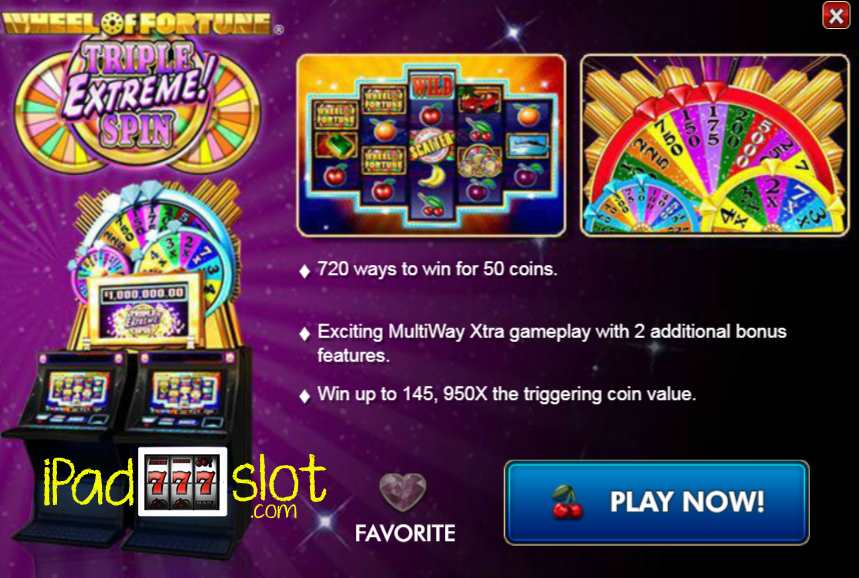 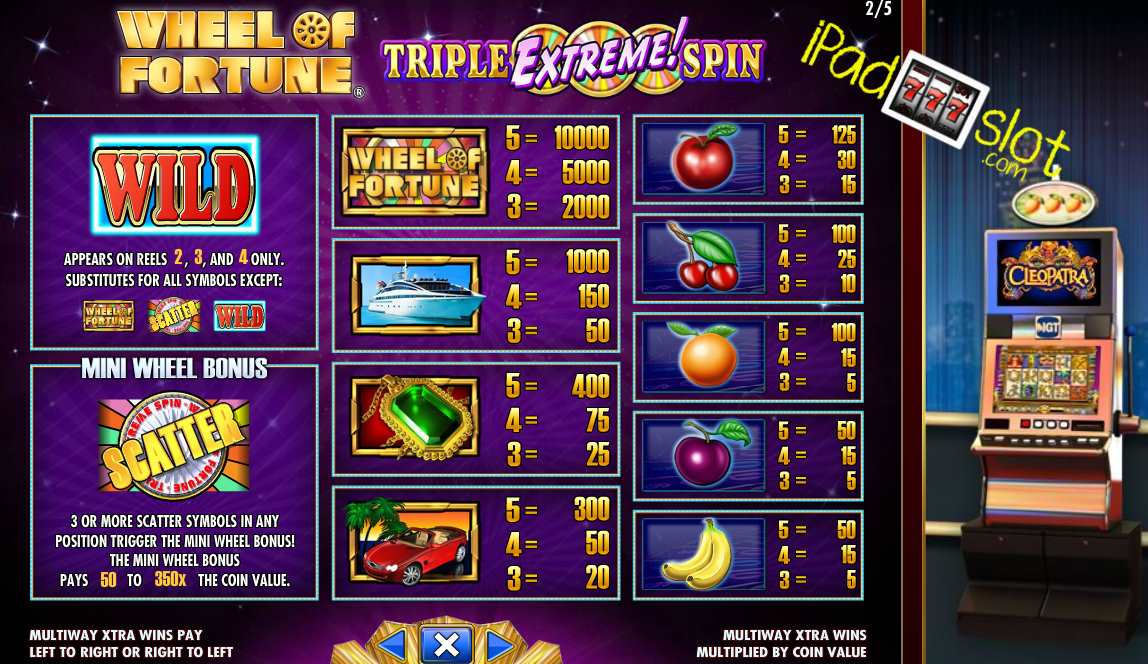 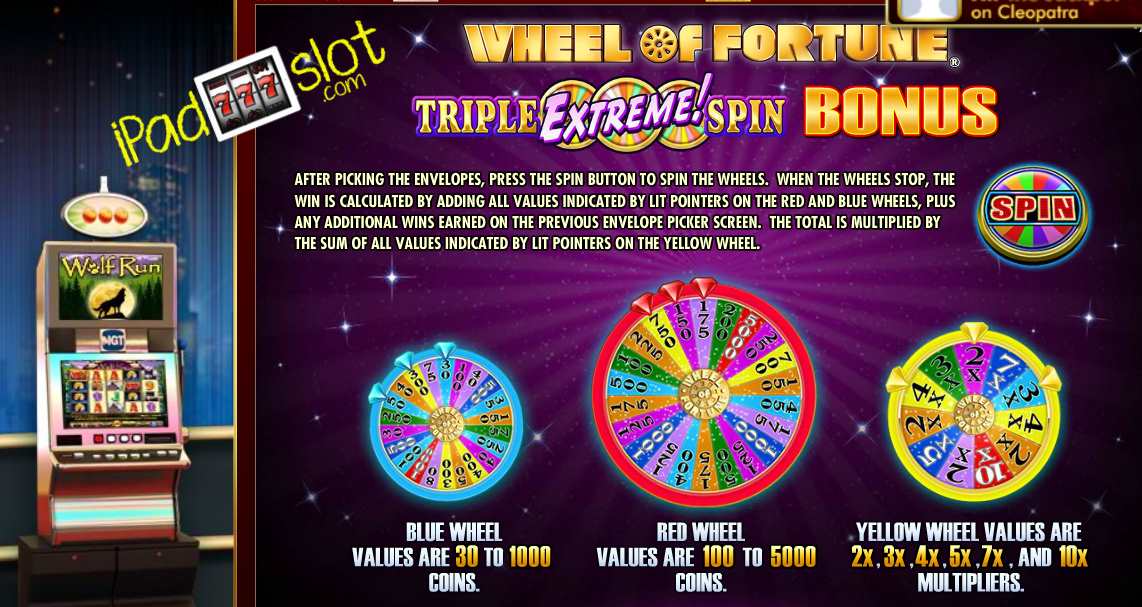 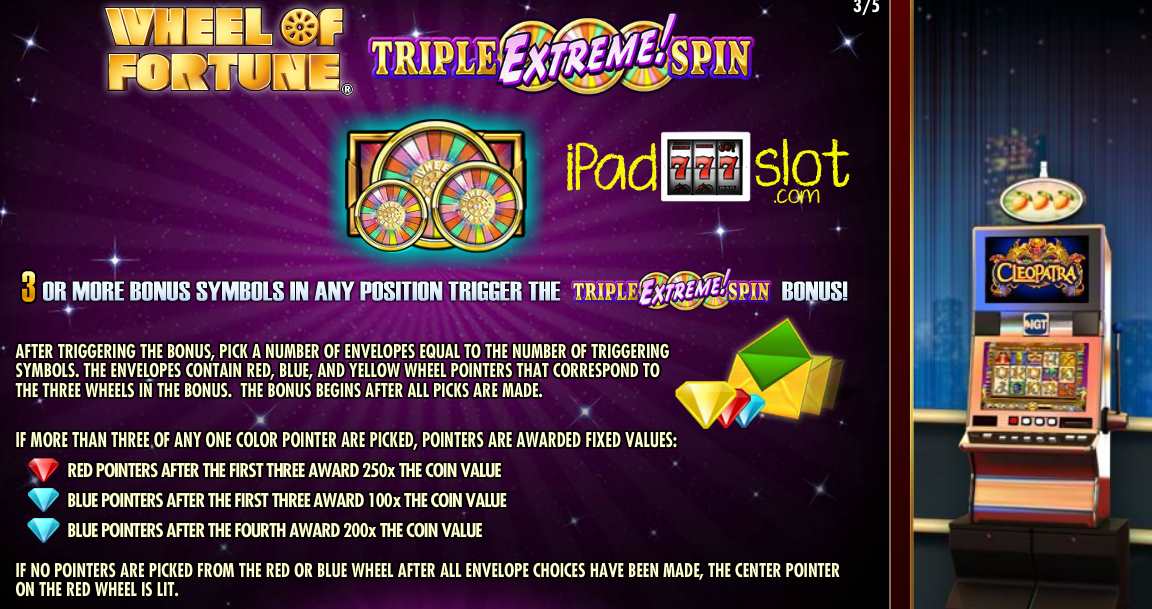 Wheel of Fortune Triple Extreme Spin is one such game from IGT which gives the hit TV show a great adaption. We give this iPad slot a 9 from 10 points in our review and you can play it for cash or for free social coins from our casino reviews page that has heaps of IGT online slot gaming sites.

Monopoly Roulette Tycoon by Williams Games Monopoly Roulette Tycoon is a game from SG Interactive, It's actually from the Williams game development studio of awesome games. It fuses two games into one, w...
Mr. Money Bags Free Slots Game Guide The title of this slot game reveals it all, this is a classic game with a wealth theme. The player is introduced to a very wealthy but also generous man called ...
Mild Rockers Lightning Box Free Slot Game Guide Mild Rockers is an iPad compatible slot which comes from the Lightning Box stable. This game comes with a clubbing theme meaning that as players spin the reels,...
Mystic Moon Big Hit Bonanza Ainsworth iOS Free S... Mystic Moon Big Hit Bonanza is a magic-themed slot game that comes from the Ainsworth company who make all the must play pokies (slot) machines. As players spin...
Da Vinci Diamonds Online Slots Game Review This iPad slot is one of the games that IGT designed having seen the huge success that the Da Vinci slot machine had achieved in land-based casino popularity. T...
Oceans of Beauty Free Slots Game Have you ever wondered about what rests at the bottom of the ocean like remnants of the Titanic or other lost ships, but what other bits and bobs rests on the b...
Weird, Wicked & Wild Free Play Pokies Guide Weird, Wicked and Wild is a free online pokies machine which comes from the Aristocrat company. The title of this online slot does by all means gives the player...
Lucky Larry’s Lobstermania 2 Free Play & Re... Lucky Larry’s Lobstermania 2 is yet another animal-themed online slot game made by IGT. The game possesses a theme of marine world of lobsters and their lives u...
Gold & Dragon Free Slots Game Guide Gold & Dragon is an oriental themed slot game from IGT. The game is one of the newly released progressive games from the IGT stable which comes with four pr...
Sherlock Holmes: The Hunt for Blackwood Free Slo... Sherlock Holmes: The Hunt for Blackwood is an online slot machine from the IGT company. This game adaptation is from the movie which goes by the same name altho...
Monopoly Bring The House Down Barcrest Free App It's time to ‘bring the house down’ and take all the money in this SG Interactive powered slot game from the Barcrest Studio of popular online free and real mon...
Flaming Dice EGT Slot Game Review Flaming Dice is all about throwing the dice on the reels and hopefully getting some cool rewards in return. EGT used two concepts in developing this slot game, ...
Free Play Lightning Blast Twilight Tundra Slot G... Lightning Blast Twilight Tundra comes from the Aristocrat company. If you love the Lightning Link free or real money slots then this pokies machine is your go-t...
IGT Fishing Bob Free Slots Guide As you can deduce from the slot title, this IGT powered iPad compatible slot is all about fishing. You need to join Bob on his fishing adventure if you want to ...
Quickspin Gold Lab Free iPad Slot Review Gold Lab is a science-based free iPad slot game developed by Quickspin. This is 5 reel and 25 pay-line iPad pokie. Players are taken into a scientific laborator...
Hercules High and Mighty Barcrest Free Slots App The SG Interactive Barcrest powered Hercules High and Mighty is a iPad and iPhone compatible slot game which pays tribute to the Greek mighty warrior aka Hercul...
Pharaoh’s Tomb Novomatic Free Slot Game Guide According to Egyptian history, Pharaohs during their time were among the world’s most powerful and wealthy individuals in the land. However, when they died, Pha...
Goldify IGT Slots Game Review & Guide This is a Greek-themed iPad slot game from IGT that's pretty awesome overall. Goldify is based on the tale of King Midas who is widely believed to have been cur...
Helen of Troy Aristocrat Free Slots Game Guide It's time to embrace the old when you play this Aristocrat powered video slot. Set in medieval Europe where Helen of Troy was one of the most feared but wisest ...
Pearl River Quad Shot Ainsworth Free Slots App Pearl River Quad Shot is a Chinese themed game. This Ainsworth powered pokie primarily focuses on the majestic and beautiful Pearl River. As such, when spinning...
Tags: IGT free app, IGT free iPad pokies, IGT free iPad slots, Wheel Of Fortune Triple Extreme Spin Free slots,