When it comes to slot games, different players have different reasons as to why they play. Some simply love the entertainment element which they get from spinning the reels while others are attracted by the wins or bonus features that different iPad slot games offer.

If your motivation for playing slot games is inspired by the latter, then you need to start spinning the five reels of this Aristocrat powered video slot as you can earn yourself some excellent rewards in form of Wild Ameri’Coins by Aristocrat!

This game has 30 ways to win some nice rewards be them for free social coins at Heart of Vegas or for real money gaming at your favourite local Aristocrat land casino.

If you like this slot machine make sure you have a peek at the Wild Fiesta’Coins and Wild Lepre’Coins iPad compatible slots games that are just as much fun to play.

The background of this slot game depicts a huge red curtain opened halfway. The reels of this game are layerd by a cream colour as you can see below in the image. 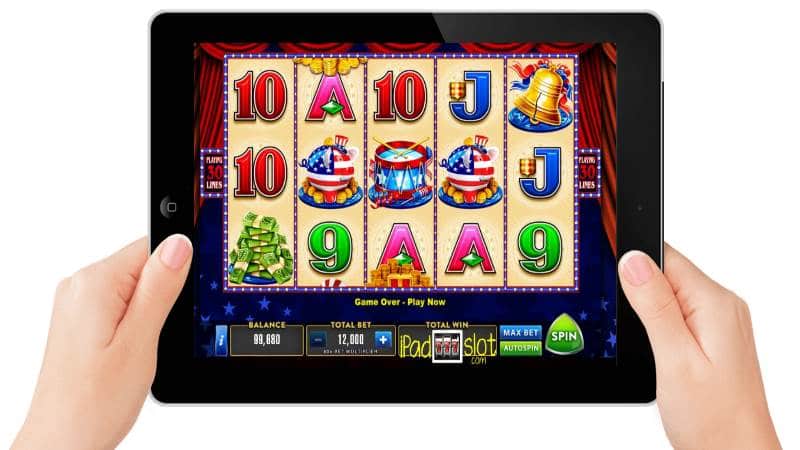 ** The popular Wild Ameri’Coins Aristocrat slot machine may be available to play for free or real moolah on your iPad, iPhone, Android, Windows device, PC or Mac. Just take a look at our online casino guides here. **

The symbols that players will find on the reels when playing this game include stacks of green cash, pot covered in American colours, a bell, a drum and traditional poker symbols.

Wild Ameri’Coins is an entertaining slot game that’s easy to understand and also to play and for our tastes the best ‘Coins genre iPad slots thus far from from Aristocrat in this theme. This game gets a 8.5 point rating out of 10 points in our how to play and win gaming guide.

Lightning Box Free Slots Fortune 8 Cat Cats are considered as one of the lucky animals in an ancient history. More so if you are from China. This slot promises to bring good luck to you in the form o...
Wheel of Fortune Double Diamond Free Slots Guide Wheel of Fortune Double Diamond is one of the games from IGT which comes with a retro theme though it was created in the era of old school slots. This iPad comp...
Lucky Little Gods Online Slot Review Lucky Little Gods is an anime-themed online slot machine which comes from the Microgaming company. Coming with an anime vibe, this, therefore means that Lucky L...
GameArt Guardian Lion Slots Review With rows of 3, reels of 5 and pay lines of 10 in total, this game is worth playing for all iPad slot casino lovers. The pay lines are fixed, and it cannot be c...
Astro Cat Lightning Box Pokies Free Play Guide Astro Cat is an online slot machine which comes with an animal theme and it's just the pokies game to play for free or real on your iPad, iPhone or Android. Thi...
Timber Wolf Deluxe Free Slots Guide Aristocrat in this slot game brings you a game which takes place inside a huge scary forest full of vicious wolfs and tigers. Set in the middle of nowhere in a ...
Wild West Free Slot by NextGen Game Guide Wild West takes players on an exciting adventure through the old time West. The game is offered by NextGen and has some high quality features that are used for ...
Piggy Jackpots IGT Slots Game Guide This IGT powered video slot is all about some cute little pigs as you can deduce from the slot’s title. Match as many fat little pigs as you can and you are gua...
Go Bananas iPad Slot Machine Review and Free Pla... Many players will go ape over Go Bananas and the entire iPad slot machine game is based on monkeys as you already worked out. The symbols that are used on the r...
Mega Boy iSoftBet Slots Guide There is competition between slots developers to release different casino slots. Granted, slots developers are exploring all available options to bring out casi...
Aristocrat Aztec Goddess Pokies Free Play Guide With Aztec Goddess slot game, you will undertake a virtual trip to the deep jungle of Mexico & discover the mysteries that are hidden beneath the mighty pyr...
The Big Easy IGT Slot Game & Guide Americans will have an easy time recognising what this slot game is based upon. However, to impart non-Americans with knowledge on what they may not have known,...
Fire Wolf II Free AGS Slot Game Guide The AGS powered Fire Wolf II is a sequel to the highly popular Fire Wolf slot. Just like its predecessor, this game can be described as an awesome release. If y...
Reel King Novomatic Slots Free App Guide Reel King is a fruit themed slot game which was developed by Novomatic who are one of the most popular slot machine companies in Europe. As most other fruit-the...
Divine Dreams Free Quickspin Slot Game Guide Divine Dreams is an Far Eastern-themed online slot machine. This online slot machine is powered by Quickspin and it comes with five reels and 243 ways to win. ...
Huangdi the Yellow Emperor by Microgaming Guide Huangdi the Yellow Emperor is a free or real money iPad compatible slot game from Microgaming and it's pretty good overall. The game has 5 reels and 25 pay line...
Cai Yuan Guang Jin Free Slot Game Guide The Chinese New Year is the most anticipated holiday in China. All year round communities and families are much consumed with their New Year preparations and wh...
Triple Diamond By IGT Free Play Guide For those who love playing iPad slot machine games, we are pretty sure that you may have tried almost everything, from the more complex slots with 40+ play line...
Book of Ra 6 Novomatic Free Slot Game Guide Some years back, Novomatic, one of the leading European software developers in the online gaming industry released the Book of Ra slot game, it became a big hit...
Rainbow Riches Reels of Gold Free Slot Guide The title of this slot game is enough on its own to lure players. Odds are, no one would want to miss a chance of spinning reels crafted out of gold! The beauty...
Tags: Aristocrat free iPad pokies, Aristocrat free iPad slots, Aristocrat Free Slot App Article Tags, Wild Ameri’Coins Free Slots,