The great and fun-loving Panda is viewed as a symbol of good luck in China and Asia. To the whole world; it is a gentle furry creature that needs to be treasured. Aristocrat used this attribute to develop a new five reels, four rows and one hundred pay lines known as the free Wild Panda pokies app for iPad. 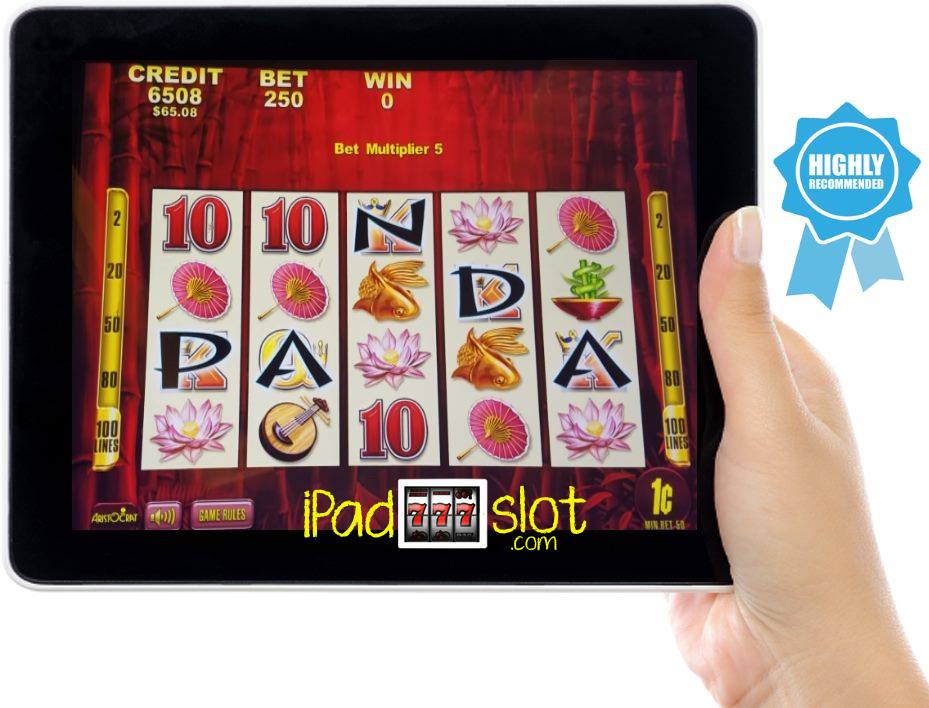 The game takes you on a wild adventure in Central China where you interact with highly protected pandas that live in the thick bamboo forest. The game exhibits a dark red background that is completed by a bamboo forest which acts as the habitat for the black and white panda.

This five reel and 100 pay line slots give you a glimpse of the serenity of the Chinese wild lands, with the canny wild pandas. The game is set in a bamboo forest terrain, and as the name suggests, the wild panda is the main character. The game comes with simple yet addictive graphics.

Nestled in a deep rich red background, the game offers a unique chance for players to enjoy ancient Chinese features brought out by Aristocrat as scatters and wilds to help you complete big wins.

The game comes with various symbols that relate to the Chinese and panda theme such as an ancient temple, a money tree, a golden medallion, a koi fish, a lotus flower, a string musical instrument and an umbrella. Little value symbols that can give you small wins on the game include letter symbol from Ace to 10. At times, the card symbols may have letters A, P, D and N on top of them.

The highest paying symbol is the temple which gives 1000 coins. The golden medallion is the scatter symbol which offers extra credits other than free spins like in other slots.

To trigger the free spins, the player is required to hit a combination that spells the word “PANDA” on the reels. When you achieve this, you are awarded five free spins.

The Panda is the wild symbol for this game, but surprisingly, it is not present in the base game but only comes into action during the free spins.

The fact that this game has 100 pay lines and features one of the gentlest creatures in the world is a plus. However, the game has an imaginative bonus feature as well as a slightly odd soundtrack. It is not suited for high rollers, but if you like Pandas, and you won’t mind small wins, this game is for you. Gran this free iPad Aristocrat pokies app at the Heart of Vegas casino today.

Aristocrat Cashman Fever Hot Chocolate Slot Free... Cashman Fever Hot Chocolate is an online slot machine which comes from the Aristocrat company. The title of this online slot machine does reveal all when it com...
Gold Stacks Golden Seas Free Aristocrat Pokies Gold Stacks Golden Seas is an jackpot online slot machine which comes from the Aristocrat company. This free game comes with an ancient royal theme. Gold Stack...
Stinkin’ Rich IGT Free Slots Guide Stinkin' Rich from IGT is a unique game that has a theme of rich aristocratic people with the players getting a chance to get access to their monies. The game g...
Diamond Tower Lightning Box Free Slot Guide Diamond Tower is an online slot machine produced by Lightning Box which comes with a wealth and fancy pants theme. This game will introduce players to the glitz...
Pompeii Slots app for iPad Casino Players The best way to play and win on Pompeii iPad slot game has been asked many times before, their is no sure way but our guide may help you in the quest to win big...
Dragon Fury Slots by Gaming1 Review Yes this is yet another game in the genre of "Dragons", it seems every second Asian slot features this theme in the design. The Dragon Fury iPad compatible slot...
Exotic Cats Microgaming Slot review Exotic Cats Online Slot Game Review Exotic Cats is an online slot from the Microgaming company. As players can probably tell from the title, this game is all a...
Wild Ameri’Coins Free Slots Game Guide When it comes to slot games, different players have different reasons as to why they play. Some simply love the entertainment element which they get from spinni...
Shanghai Beauty by Microgaming Slots Review Beauty enchants wherever you are in the country of China, be it the food, the local sights or the women. One such beautiful slot is a Shanghai Beauty iPad slot ...
Imperial Wealth Slots App by Konami Guide Imperial Wealth is an oriental themed slot game from Konami which celebrates Chinese traditions, power and strength. For players to start playing Imperial Wealt...
Crown Of Egypt Free IGT Slots Guide Crown of Egypt from IGT is an Egypt-themed game slot that has people falling in love with it due to the classic symbols and features that are IGT awesome. The f...
Spellcast NetEnt Free Slot Game Review Spellcast is a popular game widely present in online casinos. This is the creation of NetEnt. This game has 5-reels, 3-rows, 20-pay lines and a unique feature. ...
Flying Horse Free Slot by Ainsworth Guide Introducing a fun creation from Ainsworth which is Australia’s leading pokie gaming software developer, this Flying Horse game provides you with bonus rounds, s...
Aristocrat Red Baron Free Slots Guide Do you know "Red Baron" - the famous German fighter pilot? This legendary & fearsome character ruled the skies from his cockpit in a red bi-plane during Wor...
Polar High Roller Free VGT / Aristocrat Slot Polar High Roller is an online slot machine produced by the VGT company which is a part of Aristocrat. The slot comes with a classic design as it has only three...
Microgaming Ninja Magic Free Slots App Guide Ninja Magic by Microgaming is a Ninja-themed iPad slot machine game which has some of the most entertaining bonuses and prize money rewards to be found at onlin...
GameArt Dragon King Free Slots Review This fantastic iPad compatible slot machine called Dragon King consists of 5 reels and 50 pay lines. GameArt attracts fans of iPad casinos games with Asian them...
Golden Knight Free High 5 Games Slots Golden Knight is a Royal themed online slot machine that comes from the High 5 Games company. Players looking to enjoy the game ought to know that they will be ...
Aristocrat Lightning Blast Pacific Princess Free... Lightning Blast Pacific Princess is an online slot machine powered by Aristocrat. This game falls under the ‘Lightning Blast’ range of pokies, an Aristocrat ser...
Best Free and Real Money Play Roulette Casino Ap... Think about a game of excitement, fun and possible wins, well let’s think about roulette for a bit. Though filled with excitement, the game of roulette can be b...
Tags: Aristocrat free iPad pokies, Aristocrat free iPad slots, Aristocrat Free Slot App Article Tags, Wild Panda Free iPad pokies, Wild Panda Free iPad slots,