Wild Tooth is an animal themed slot game from Aristocrat. The game takes the player right inside a huge forest with some tall mountains. For spotting animals of the same kind in sets of three or more the player is rewarded excellently. However, when the player spots the tall mountains they are in for a great treat as the mountains in this game are the special icons which reward the player generously (well hopefully).

In order to start your adventure playing Wild Tooth, the player simply needs to spin the five reels of this game that come with 5 paylines. The background of this slot game depicts a huge mountain at dawn. A solid blue colour covers the entire reel section nicely. 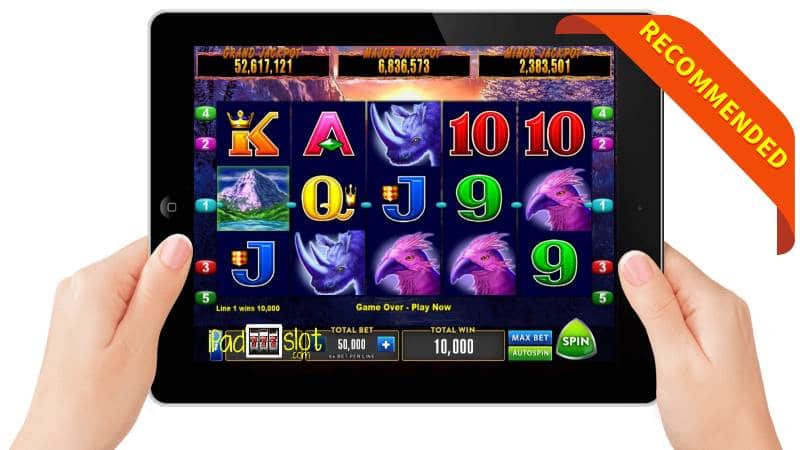 ** The Wild Tooth Aristocrat slots game might be available to play for free fun or real cash on your iPad, iPhone, Android, Windows device, PC or Mac. Just take a look at our online casino guides here. **

The symbols that players will find on the reels when playing this game include an elephant, a buffalo, a bird and some traditional card symbols. 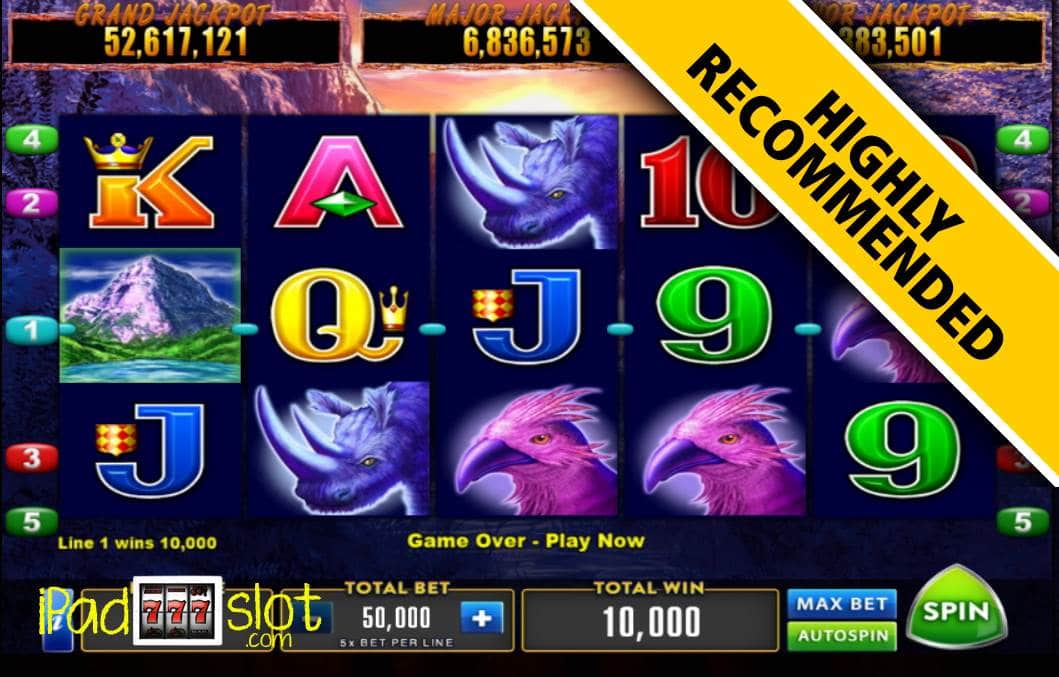 Wild Tooth is a cracker iPad slot game in the animal-themed slot game genre from Aristocrat. This, however, does not take away the fact that this is an entertaining game to play. This slot gets a 7 point rating out of 10 points. It looks a bit dated in design and can be played at the Heart of Vegas site for free fun.

Aristocrat Mystical Sands Free Slots App Guide Mystical Sands is an Egyptian themed iPad compatible slot machine game app from the Aristocrat stable. You may be wondering how the title relates to the game’s ...
Invisible Man Online Slot Review NetEnt has entered a licensing agreement with Universal Pictures to bring slot players this great Invisible Man game. This is one of the latest branded slots to...
12 Slot Apps to Play Free & Real on iPad, A... You will find that there are hundreds if not thousands of mobile slots out there. To narrow down your search when looking for great slot games to play with or w...
Aristocrat Red Baron Free Slots Guide Do you know "Red Baron" - the famous German fighter pilot? This legendary & fearsome character ruled the skies from his cockpit in a red bi-plane during Wor...
Ainsworth Run With The Wolves Quad Shot App The title of this slot game easily reveals the theme behind the game i.e. this is a wolf themed pokies game. As players spin the reels of this progressive game,...
Rainbow Riches Free Spins Barcrest App The ‘Rainbow Riches’ series is one of the most popular slot series to come from the SG Interactive stable of Barcrest games. Adding on to the vast number of tit...
Aristocrat Wicked Winnings II Free Slots Game Gu... Wicked Winnings II is an intriguing free pokies game from Australia’s most popular software provider Aristocrat. This slot is loved because of the great bonus f...
Texas Tea Free Online Slot Game Review The title of this IGT slot game will mean different things to players from different regions. For slot players not resident in Texas or surrounding areas, the h...
Dolphin Treasure Gold Free Aristocrat Pokies Are you ready for more fun than the original Flipper themed pokies game loved by millions around the world? ok well check-out the Dolphin Treasure Gold slot mac...
Lightning Box Five Pirates Free Slot Guide Five Pirates is a game which comes from the Lightning Box company. Players looking to play this pirate-themed online slot will find themselves conspiring with a...
BetSoft Gaming Great 88 Free Slots Guide The BetSoft Gaming launched this 3-dimensional style iPad compatible Asian themed poker machine in the year 2016 during September. This impressive game has a th...
Aristocrat New Year’s Treasure Free Slots Game New Year’s Treasure is an Chinese themed free slot game which comes from the Aristocrat stable. This game does pay homage to the colourful Asian New Year celebr...
Betsoft More Gold Diggin Free iPad Slot Review One of the latest and most innovative iPad slot games to date, More Gold Diggin pokies by Betsoft introduces a fresh twist to slot games by incorporating stunni...
Aristocrat Wicked Winnings IV Free Play Pokies G... Wicked Winnings IV is an online slot machine from Aristocrat. The slot is a yet another sequel to Wicked Winnings 1, 2 and 3. Aristocrat decided to create anoth...
5 Dragons Rapid Free Slots Game Review From bedtime stories that our parents or guardians used to tell us when we were young, stories with mythical creatures commonly known as dragons used to pop up ...
Mr Cashman Magic Eyes Free Pokies Game Mr Cashman Magic Eyes is an online slot machine which comes from the Aristocrat company. One word from the game’s title i.e. ‘Magic’ does reveal the theme of th...
Tetris Super Jackpots Bally Free Play Slots Guid... Nearly two decades ago, the game of Tetris was released to the world thanks to Alexey Leonidovich Pajitnov who was a Russian video game developer. Since its rel...
Aristocrat More Chilli Emerald Edition Free Slot... Crank up the heat in this deliciously diabolic Mexicana themed online pokies game from Aristocrat, Australia’s number 1 gaming brand with roots in land based ga...
Lucky Lady’s Charm Deluxe 6 Free Slots The Lucky Lady's Charm is one of the most popular iPad slot series in the gaming market, this Novomatic slot is the latest edition and the third in line thuus f...
Magic Flower Deluxe Free Aristocrat Pokies Game Magic Flower Deluxe is a online slot machine from the Aristocrat company. This game comes with an oriental theme of an Asian village setting. The Magic Flowe...
Tags: Aristocrat free iPad pokies, Aristocrat free iPad slots, Aristocrat Free Slot App Article Tags, Wild Tooth slots,