Buy one, get one free. Have you ever heard of this promotion? My guess is, yes you have (and probably you have taken advantage of it and bought two things for the price of one). While it’s absolutely wonderful to receive another product for free after purchasing just one, imagine receiving three free products when you purchase just one, you get where i am going on this right.

Yes, this is very much possible and to take advantage of this, all you need to do is to play the free Aristocrat powered slot game called Wonder 4 Special Edition at Heart of Vegas. For everything you get in this game, you earn three others for free meaning in addition to the one reel set you wager on, you earn three additional reel sets with 5 reels each. This, therefore, brings the total reel sets you spin in this game to four. Another Wonder 4 genre pokies game you may want to play for free is the Wonder 4 Jackpots slot. 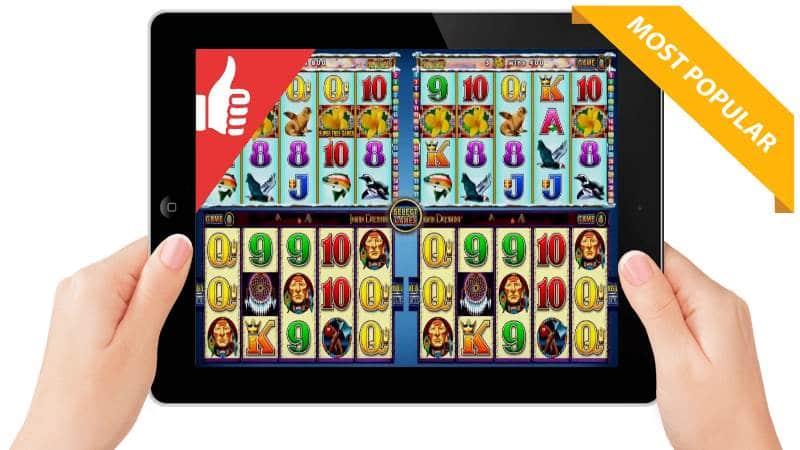 ** The Wonder 4 Special Edition Aristocrat slot game might be available to play for free fun or real cash on your iPad, iPhone, Android, Windows device, PC or Mac. Just take a look at our online casino guides here. **

The backdrop of this game is covered by a nice blue background so it’s another eye candy Aristocrat slot machine.

Wonder 4 Special Edition is an innovative game from Aristocrat which allows players to spin the reels of four games at the same time on the most loved pokies machines ever invented. This slot gets a 9 point rating out of 10 points and this game is available for free play at Heart of Vegas, real money Aristocrat games can be played from our casino reviews.

Cats IGT Slots Free Play Guide Players who have visited land-based casinos to play slot games will know that one of the most popular and most played slot games is the Cats slot machine. The g...
Double Happiness Pokies App from Aristocrat (FRE... Double Happiness is a bright and lively slot game designed by Aristocrat Gaming. This is a 5 reel and 25 pay-line online slot. The design is based on an Asian t...
Glitter Gems by Ainsworth Free & Real Play ... Glitter Gems exciting iPad compatible slot machine game by Ainsworth gaming, it's a spectacular example of how to engage players in a eye candy theme which Ains...
Phoenix Princess GameArt Free Slots Review The Asian themed Phoenix Princess is an engaging iPad slot from GameArt. The 5 reels and 20 pay lines game has a layout that helps in playing the bonus feature ...
Wild Lepre’Coins Slots by Aristocrat Free ... "Wild Lepre'Coins" by Aristocrat is truly inspired by classic Irish folklore and its unique culture. Thus you will notice a lot of greenery on the pokies reels ...
Thunder Cash Ainsworth Free Slot Review Ainsworth is one of Australia’s leading pokies gaming developers, it has created a online version of the very popular casino game Thunder Cash in this 5 reeled ...
Jade Tiger Ainsworth Free Slots App Jade Tiger is an Asian themed slot game with a particular focus on Asian animals including the tiger. When spinning the five reels of this Ainsworth powered slo...
The BullFighter Free Slots Game Guide Spain is one of the most popular country's where bullfighting is legal. However, most other countries across the globe have either explicitly or implicitly bann...
Jinfu Long Online Slot Review There is thousands of oriental themed slots in the market, there are a few that manage to get everything right. One such game that makes the grade is the Playte...
Pearl River Ainsworth Slot Game App Review Pearl River is an aquatic-themed slot game from the Ainsworth stable of super pokies. This slot has a number of elements that make it appealing. First of all, i...
Nordic Heroes by IGT Slots Game Guide Nordic Heroes is a unique game developed by IGT, which focuses on fantasy warfare along with having a layout, which closely resembles pokers. The game layout is...
Astronomical Magic Free Konami Pokies Game Astronomical Magic is an online slot machine which comes from the Konami company. As one can deduce from the title, this free pokies game does come with a magic...
Super Red Phoenix Free SG Slot Review Soar with the dragons and become one in this Bally - Scientific Gaming Interactive video slot game offering a number of exclusive features that is sure to excit...
Jaguar Mist Free Mobile Pokies app by Aristocrat The Jaguar Mist mobile pokies app by Aristocrat Gaming is a popular online slot and is offered by Heart of Vegas. It isn’t very new in the market and is most po...
Cash Spin Free Bally Slots App Game Guide Cash Spin Slots made by Bally is one of the most simple slot games out there, so make sure you grab the free Bally iOS or Android slot app and get playing. Ther...
The Lovely Outlaws Free High 5 Games Slot Game The Lovely Outlaws is a High 5 Games powered slot that comes with a wild west theme. Normally, wild west themes feature male characters but that’s not the case ...
The Fates Slots Game Guide Free Version Many times when we play slot games, winning or losing is all down to fate. This cosmic themed IGT game is all about that, fate being the determinant of winning ...
Valkyrie Fire Barcrest Free App Review Valkyrie is a Norse mythology themed iPad and iPhone compatible slot which comes from the SG Interactive stable of Barcrest games. This slot has a special focus...
Quickspin Dragon Shrine Slots Game Guide Dragon Shrine is a iPad slot dedicated to dragons that are often themed into scores of slot games. And yes, you guessed it right, it belongs to the Chinese them...
Aristocrat Triple 7 Wildfire Double Free Slots G... Take your online slot gaming to a new level with Triple 7 Wildfire Double slot game from Aristocrat developers. This slot machine is built with high quality gra...
Tags: Aristocrat free iPad pokies, Aristocrat free iPad slots, Aristocrat Free Slot App Article Tags, Wonder 4 Special Edition Free Slots,