Did you know the character, “Zorro” one of the most popular heroes in Mexican and American folklore that has been themed into movies, comic books TV shows and games. He is a fictional character that is created by a famous pulp writer, Johnston McCulley.

While the character has undergone significant changes over the course of years. However, the typical image of this character reveals a black-clad masked outlaw with his trusty horse Tornado who continuously defends the people and other commoners against tyrannical officials & unscrupulous villains.

Due to his enormous popularity & massive notoriety, Aristocrat Technologies has released an online slot game “Zorro the Tale of the Lost Gold” and it’s just as good as the original “Zorro” game. Players will get enough chances to enjoy an interesting gaming journey with their popular hero, Zorro. Plus, this game even offers you great bonus features in order to make your game play even more compelling & rewarding. 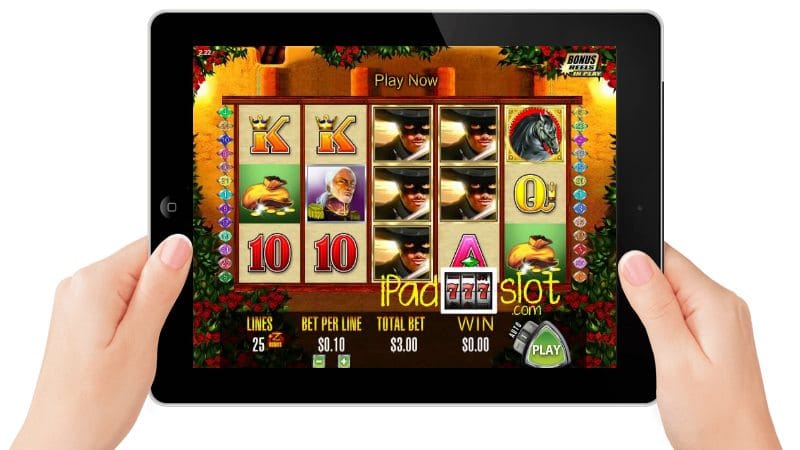 Zorro the Tale of the Lost Gold Free Play Guide : 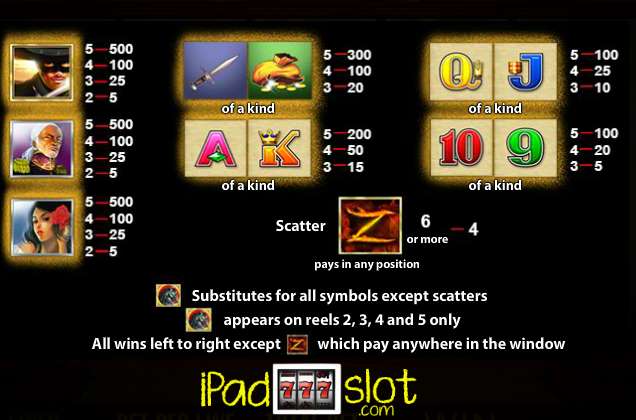 When the free games are triggered, four windows will appear. You will need to select any one of the four available windows. Each window will have a new Zorro Z counter that will start from 0.

Whenever, the Zorro Z symbols will appear on the game screen, the counter will be incremented by 1.

Further, you will win a Zorro Bonus if your selected window has the highest count of Zorro Z symbols at the end of the free games. 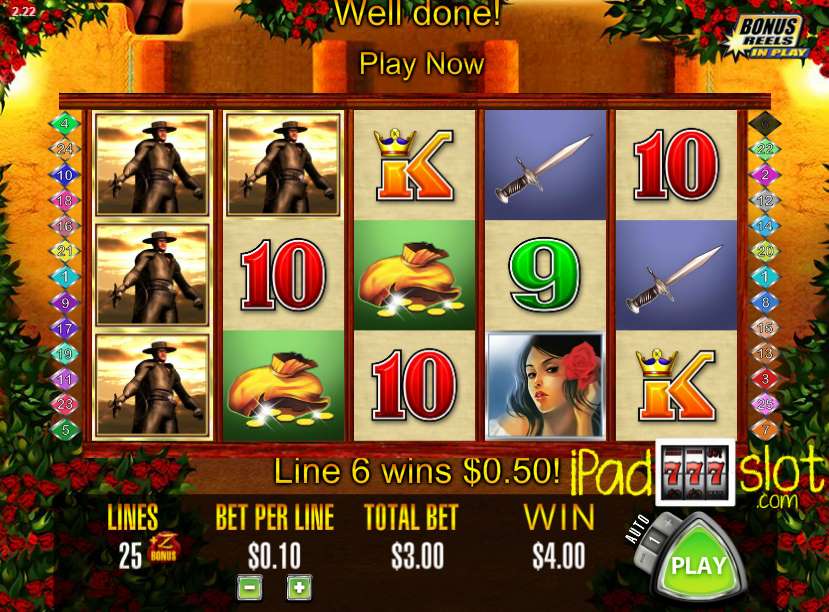 In terms of payouts, this game will certainly reward you with generous payouts as mentioned below :

Other than that, there are a few other gaming icons, specifically the letter-headed symbols & the number symbols. However, these icons generate lesser payouts.

“Zorro the Tale of the Lost Gold” offers an interesting game play that will surely captivate your gaming experience. Its unique bonus features & free spins round can provide you the most rewarding game play on your iPad or iPhone.

So, kick-start your gaming journey, try to collect as many Zorro – Z symbols as you can, win free games, generate lucrative payouts, and enjoy your game play with Zorro for free at Heart of Vegas or real money from our best Aristocrat casinos in our reviews.

Must Watch Zorro Themed Slot Below

Wonders of Africa Free IGT Slots Game Guide Different continents and regions are known for different things. The European continent is known for its brilliant medieval and modern day architecture, the Sou...
Ancient Gong Slots by GameArt Review This 5 and 3 reels and rows game helps to bring the old vibe back to players. The Charm of Asia with a Buddha theme is used in this iPad compatible slot game qu...
Fire Wolf II Free AGS Slot Game Guide The AGS powered Fire Wolf II is a sequel to the highly popular Fire Wolf slot. Just like its predecessor, this game can be described as an awesome release. If y...
Golden Wolves Konami Slots Guide Golden Wolves is an animal themed iPad slot game powered by Konami. This game takes the player inside an arctic forest where there are lots of wolves, eagles, a...
Silver Lion by Lightning Box Free Play Guide Silver Lion is an  slot game developed by Lightning Box. This is a 5 reel game that offers 1024 ways of winning. Players are provided with an opportunity to tak...
Aristocrat Brazil Free or Real Play Slots Guide The iconic imagery of Brazil by Aristocrat is truly exceptional. Starting from the lovely & gorgeous beaches and massive rainforests to the pageantry of Car...
Himalayas Roof of the World Free Slot Game Himalayas Roof of the World is a graphically stunning Barcrest game from SG Interactive based on the world’s biggest mountain ranges i.e. the Himalayas, which i...
Titans of the Sun Theia iPad Pokies Review and F... Titans of the Sun Theia is an incredible iPad pokies game that's powered by Microgaming. It was released in October 2015 and is centered on Greek mythology, so ...
Mythical Treasure Fortune Gods Jackpot Slot Guid... Pocket Games Soft in recent times has embarked on a drive to launch jackpot versions of its most popular online slot machines. One of such games is Mythical Tre...
Soldier of Rome Barcrest Free Slots App Soldier of Rome is an innovative action themed iPad and iPhone compatible slot game which comes from the SG Interactive stable of fine Barcrest games. As you wo...
Legends Of New York by Ainsworth Real & Fre... Legends of New York slot is one of a kind slot machine iPad compatible game developed by Ainsworth, which the fans say it's one of their best. The game features...
Ainsworth Run With The Wolves Quad Shot App The title of this slot game easily reveals the theme behind the game i.e. this is a wolf themed pokies game. As players spin the reels of this progressive game,...
NYX Druidess Gold iPad Pokie Free Play Guide The NYX Celtic fantasy-themed Druidess Gold iPad slot features the titular druidess plus a host of other motifs of the pagan faith. It’s for this reason why if ...
Reel ’em In Lobster Potty Free Barcrest Ap... Reel 'em In Lobster Potty is an aquatic-themed slot game whose action all takes place on the high seas. This SG Interactive powered slot game from the Barcrest ...
Red Tiger Gaming Lucky Fortune Cat Slots Guide This is a Chinese-themed casino slot game which is both unique and gives the players something new to try in format. There are total reels of 5 and about 20 of ...
Lightning Storm Dolphin Treasure Free Pokies (Sl... Lightning Storm Dolphin Treasure is an Aristocrat online slot game that comes with an aquatic theme. When spinning the five reels of this online slot machine, p...
Ainsworth Jade Emperor King Strike Free App Guid... Jade Emperor King Strike is a progressive slot game which comes from the Ainsworth stable of brilliant free and real money pokies machines. This Asian themed sl...
Wheel Of Fortune Triple Extreme Spin Free App Ga... Wheel of Fortune Triple Extreme Spin is a popular iPad game developed by IGT. This is one of the top-quality slot machine games in the Wheel of Fortune series. ...
Xing Guardian NextGen Free Slots App The Xing Guardian iPad compatible slot game brings to life the exotic fables and mythology of Far Eastern cultures and life. NextGen, the developers of this gam...
Go Bananas iPad Slot Machine Review and Free Pla... Many players will go ape over Go Bananas and the entire iPad slot machine game is based on monkeys as you already worked out. The symbols that are used on the r...
Tags: Aristocrat free iPad pokies, Aristocrat free iPad slots, Aristocrat Free Slot App Article Tags, Zorro the Tale of the Lost Gold free slots,